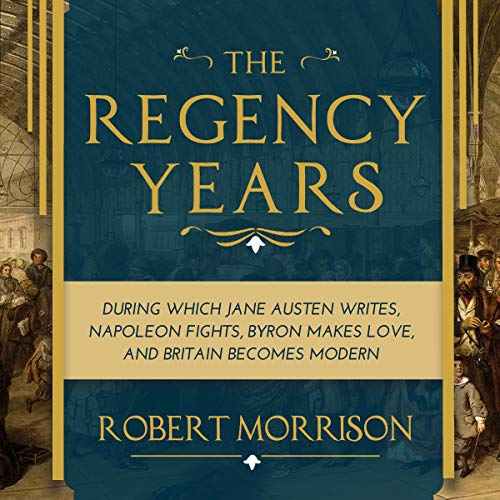 Written by: Robert Morrison
Narrated by: Chris MacDonnell
Try for $0.00

The Victorians are often credited with ushering in our current era, yet the seeds of change were planted in the years before. The Regency (1811-1820) began when the profligate Prince of Wales - the future King George IV - replaced his insane father, George III, as Britain's ruler.

Around the regent surged a society steeped in contrasts: evangelicalism and hedonism, elegance and brutality, exuberance and despair. The arts flourished at this time with a showcase of extraordinary writers and painters such as Jane Austen, Lord Byron, the Shelleys, John Constable, and J. M. W. Turner. Science burgeoned during this decade, too, giving us the steam locomotive and the blueprint for the modern computer.

Yet the dark side of the era was visible in poverty, slavery, pornography, opium, and the gothic imaginings that birthed the novel Frankenstein. With the British military in foreign lands, fighting the Napoleonic Wars in Europe and the War of 1812 in the United States, the desire for empire and an expanding colonial enterprise gained unstoppable momentum. Exploring these crosscurrents, Robert Morrison illuminates the profound ways this period shaped and indelibly marked the modern world.

What listeners say about The Regency Years

3.5. About as thorough a look at the years in question as one could hope for (with perhaps one exception: I would have liked to learn more about the daily lives of the masses, but that's OK). The Regency was truly a remarkable period... surely an understatement for a span that included Byron, Shelley, Keats, Coleridge, Austen, Frankenstein, The Vampyr, the birth of celebrity, Napoleonic wars, a London in which 1 out of every 8 women in London was in the sex trade, Luddites (the originals), Beau Brummel, painters Constable and Turner, a thoroughly dissolute monarch, scientists like Humphrey Davy and Charles Babbage, the steam locomotive, the War of 1812, Waterloo and Peterloo (one a battle, the other a massacre), and so much more. The audio edition is very ably read by Chris MacDonnell.

Very well written survey of Britain during the Regency. MacDonnell perfectly captures the tone of the book and the period is filled with exciting and contradictory characters. One of the best history books I've listened to in a long time.

a favorite on repeat

I just love this time period. it's so different from ours and yet so much is still the same

Good book, not so great reader

This is one of the better books on the period I’ve come across. It does a great job of connecting historical and social developments to artistic and literary developments. It even has some original and astute insights about familiar literary works like Pride and Prejudice, which I wasn’t expecting from a history book.

Unfortunately it was pretty unpleasant to listen to this reader. He’s not the absolute worst I’ve heard, but close. I would highly recommend reading this book rather than listening to it.

Details events and activities that colored the lives, politics, and culture of Britons between approx 1806-1820, ranging from socioeconomics to entertainment. Enlivened through extensive use of description, anecdote and commentary by contemporary journalists, essayists, poets, novelists, and observers. Engrossing and informative. The peaceful social protests of the time (and the reactions thereto) are remarkably similar to the ones America is currently experiencing.