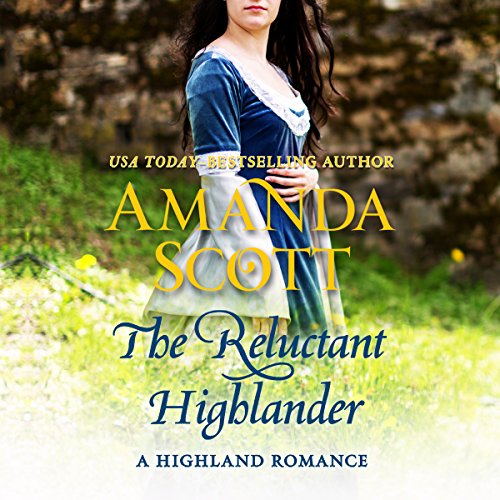 Written by: Amanda Scott
Narrated by: Mhairi Morrison
Try for $0.00

Ordinarily, Lady Fiona Ormiston wouldn't think of forming an alliance with an ungroomed, barbaric Highlander, but now, by request of the king, a brazen stranger and outsider is to be her husband. Driven by her sense of duty, Fiona leaves the comfort of her home to marry the rugged knight, but when she surrenders herself to Sir Adham MacFinlagh's powerfully passionate - and shockingly tender - touch, she finds herself in bed with a man whose ties may lie with an enemy of the throne.

Fiona isn't the only one who feels torn; falling for his beautiful, willful wife forces Sir Adham to confront the conflicting forces influencing him. With whom does his allegiance lie - a man who hopes to overthrow the king or the bride who stole his heart?

What listeners say about The Reluctant Highlander

Narration/character voices could be better

The narrator needs to do a better job of distinguishing one character from another with the voices. It all sounds like the same character speaking throughout the story. Also very monotone. Couldn’t listen to the rest of the book after 2 hours... :(

I have always loved Amanda Scott books, have read most of them, was delighted to see they were in the romance package, so was going to finish the ones I haven't read yet. I will read this one. The narrator was so boring and terrible I couldn't stay awake to tell if the story was decent or not. Shame when narrators ruin books. She read in a monotone, slowly with no emotion.

Very dull, almost non existent sex scenes. Not that it wasn’t a cute story, but that’s all it was.... cute. The writer didn’t have to overly explain the sex scenes, but an attempt to do so would have been a whole lot better. I felt like my mom was telling me a love story and was being as vague as possible. I did finish the book. I lost interest in the story and everything else. It was too predictable and boring by time I quit the book. I gave it 3 stars because it is a cute little story, just not my taste.

She read sentences with interruptions that shouldn’t have been there. Pausing too often, as if the story had commas every 3-4 words. 13 hours of this was torture.

Other characters had good Scottish accent, but not the male lead.

Another Great Romance by Amanda Scott

This is an excellent historical romance rich with historical context and realistic reflection of the time period it represented. The h&h marries and grow to love each other.
When I read the reviews I was put off at first but I am really glad I listened to the book. If you like me love rich historical romance then you will love this one.

So boring! I can’t finish it! It is more political- so little story to it! This is the first time in ten years of being on audible that I can’t even finish it. It is torture. The narrator was fine- but holy crap- don’t waste your money!

Unfortunately, I can't make it through this book even though I am 6 hours in. The "romance" aspect is lacking in chemistry and seems to be a side note to a story about which of about 10 men are allied with each other. First you will hear/read these conversations between the men and then, almost each time, you get a recap of it from the "heroine" through her conversation with one of these men....boring.The characters seem to have very little by way of personality other than the typical "she doesn't always obey" and he is a "hardened warrior". The narrator has a beautiful voice, but in this reading it is difficult to tell who she is speaking for as there is barely a perceptible change from one person to the next.

I really wanted to like it but it was too slow and boring. It was slow in getting to the storyline. I listened for 4 hours but still didn’t feel engrossed and saw no reason to commit to another 6 hours