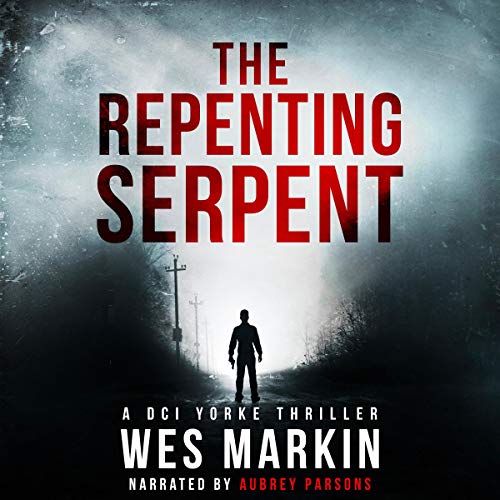 A vicious serial killer slithers from the darkness, determined to resurrect the ways of a long-dead civilization.

When the ex-wife of one of DCI Michael Yorke’s closest allies is left mutilated and murdered, Yorke and his team embark on their greatest test yet. A deeply personal case that will push them to their very limits. And, as Yorke’s team are pulled further into the dark, the killer circles, preparing to strike again.

The Repenting Serpent is a true edge-of-the-seat, nail-biting pause resister!

Praise for the book:

"Wes Markin is a new name to watch out for in crime fiction." (Stephen Booth, best-selling crime author)

What listeners say about The Repenting Serpent

This author has a way of starting a book out and leaving me rather confused among all the relationships and partially fleshed out background stories and then he brings it all together over time and makes the whole thing rocket towards a great conclusion. I like the characters and the plot lines as they develop. This is detective mystery done right.

The two different killers were very creepy.
At times it was difficult to tell who was speaking as the narrator occasionally sounded the same and there wasn't a good separation.
The main mystery had Detective York and his colleagues trying to track down the killer of a friend's ex wife. The killer was delusional and thought he was helping bring back the Aztec empire and beliefs. He practiced rituals and there was a lot of Aztec symbolism in the story.
At the same time another wacko, Lacey, who had been involved with Jake, a detective, made a reappearance and put him under a lot of stress while killing some people and having a connection to the current case.
Detective York has to deal with some personal feelings during the investigation as he is close to some of the people involved. Lots of frustration trying to figure out the connections between some of the victims.

This series just gets better with every book.

The story was faced paced and had some shocking moments.

Aubrey Parsons does a terrific narration.

I was voluntarily provided this review copy audiobook at no charge by the author, narrator, and/or publisher.

I voluntarily left this review.

A lot going on at one time will keep you wondering what going to happen next,very easy to follow. It was very enjoyable to listen to.

I will read this book again