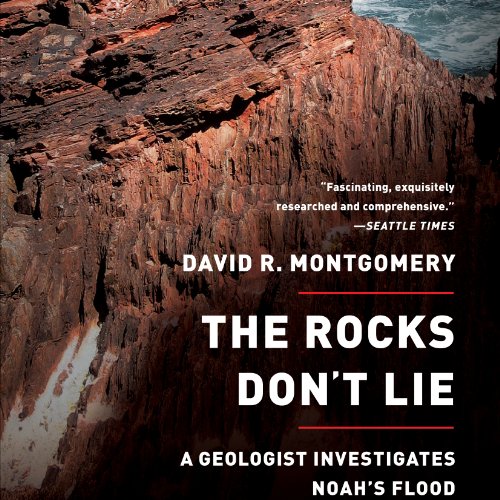 How the mystery of the Bible's greatest story shaped geology: a MacArthur Fellow presents a surprising perspective on Noah's Flood.

In Tibet, geologist David R. Montgomery heard a local story about a great flood that bore a striking similarity to Noah’s Flood. Intrigued, Montgomery began investigating theworld’s flood stories and - drawing from historic works by theologians, natural philosophers, and scientists - discovered the counterintuitive role Noah’s Flood played in the development of both geology and creationism. Steno, the grandfather of geology, even invoked the Flood in laying geology’s foundingprinciples based on his observations of northern Italian landscapes. Centuries later, the founders of modern creationism based their irrational view of a global flood on a perceptive critique of geology.

With an explorer’s eye and a refreshing approach to both faith and science, Montgomery takes readers on a journey across landscapes and cultures. In the process we discover the illusive nature of truth, whether viewed through the lens of science or religion, andh ow it changed through history and continues changing, even today.

What listeners say about The Rocks Don't Lie

I really enjoyed this book. I have never believed in the Noah's ark fable, I have read of this tale being told in many different cultures throughout history. One would assume that ancient people could have only described floods at a level of their current understanding of the world. A god being the default filler of explanation. One would also assume that stories passed along through the generations would be embellished. I am amazed that modern people continue to believe in fables when our current understanding of world answers many of the questions with rock solid evidence. Facts ignored are still facts.

This book takes the reader around the world examining ancient floods, provides supporting evidence of how life has evolved, how continents, mountains and land formation have been created...showing that the rocks don't lie.

narrator ruined it for me

I will read the book. the audio was too distracting to be able to go beyond the first few chapters.

What did you love best about The Rocks Don't Lie?

It made me aware of the extent to which the religious beliefs of the day influenced scientific interpretations.

It could have used a better editor and tightened up the narrative. At times it just went on and on. Overall, though, a very thought-provoking narrative.

I loved this from start to finish. yay science. will listen to it over and over.

The most entertaining geology and history of geology book i have ever read. Well written
and well performed. Highly recomended

Certainly has an axe to grind

Has The Rocks Don't Lie turned you off from other books in this genre?

What character would you cut from The Rocks Don't Lie?

hoped for an unbiased and interesting read- was highly disappointed- not only does the author have an obvious axe to grind, but he grinds it and grinds it to the point that the book became tiresome very quickly.

Would you try another book from David R. Montgomery and/or Gary Telles?

No. Narration is terrible and content is way toooooooo dry

What was most disappointing about David R. Montgomery’s story?

The Story, What Story?

Just too professorial. No intonation in his voice. Like listening to a dull lecture

If you could play editor, what scene or scenes would you have cut from The Rocks Don't Lie?

Just would not have even started it. I did not finish it.

Don't waste your money unless sleeping pills are not available