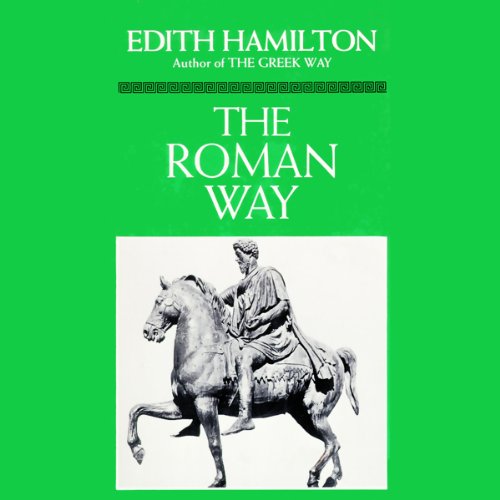 Written by: Edith Hamilton
Narrated by: Nadia May
Try for $0.00

Edith Hamilton shows us Rome through the eyes of the Romans. Plautus and Terence, Cicero and Caesar, Catullus, Horace, Virgil, and Augustus come to life in their ambitions, their work, their loves and hates. In them we see reflected a picture of Roman life very different from that fixed in our minds through schoolroom days, and far livelier.

The Roman Way makes vividly interesting the contrast between Roman and Greek culture. Moreover, it reveals how surprisingly similar Roman civilization was to that of modern America, in respects ranging from an interest in good roads and good plumbing, to the popular veneration of home and mother. Our heritage from Rome includes everything from moral laws to stock characters in the drama. Skillful, witty, subtle in understanding, this audiobook shows us what the Romans were like, how they lived, what they thought, and what they accomplished.

What listeners say about The Roman Way

What a concept: to look at Italian culture BC to AD through the lives and times of writers, poets, and politicians. I was curious but didn't think I'd listen to the end. I did. I see Audible has the author's book on Greece, which I will also listen to.

I was really excited to listen to this book but overall, I wasnt too impressed with this book. Though, I did enjoy learning about some of the similarities between Greece, Rome and modern times.

Though I love the topic of Rome. I often find that historians make it rather boring. Edith made it fascinating.

The real story is the psychoanalytic disposition of the author from reading this book, rather than any comprehension of the “vie de rum.”

A fantastic book full of deep inside into the Roma

first, if you are not very, very clear about the details of the Roman republic and early empire this is not going to be a good read. Don't do it. Get a book by Mary beard, Anthony Everitt or listen to Mike Duncan's History of Rome podcast.

That being said, this is a fantastic book with amazing insight into the Roman daily world and literature. The fact that it was written in 1932 makes it even more interesting, allowing the knowledgeable to see Rome through the eye's of the familiar world of 1930's Academia and glimpse insights our current culture would not.

This book is 80% a review of the literary talents of Roman playwrights, with 20% reflection on what they say about Roman culture, the difference with Greek cultures, and the surprising similarities to our own 21st Century views.

As another reviewer has noted, significant events from Roman history are merely mentioned. If you don't already know the story behind the reference, the author doesn't try to help you keep up.

Nadia May is always a good "history/Latin teacher" narrator.

Overall, I found that I'd rather spend my time elsewhere. But my real frustration is this is another of the many books are tailored to a niche audience but claim to be a lot more than they actually are.

The author notices much about some of the leading figures in ancient Rome and how they viewed morality, government, slavery, the Greeks and much else.

They are, in their moral reasoning, quite distant from us in some ways but less do in others. I am surprised that the stoics were anti-slavery and I wonder how much so. What did Marcus Aurelius think about slavery? How much were Roman stoics a society set off from other Romans? I want to know more about this.

The contrast of Cicero's honest letters to his close friend Atticus versus his letters to others makes me how well we know the inner thoughts of many other ancients.

A thought provoking book that left me wanting to know more about the topics covered.

Nadia May gives us another pleasant narration of Edith Hamilton’s engaging and intelligent The Roman Way. In such a way the Audible gives the book greater texture and makes it more appreciable. I listened to the Audible at 1.1 to 1.2x speed while reading the book. This is my practice. This is an outstanding book, clearly written and accessible, not stodgy at all. More than an introduction, it is like going to a dinner and being introduced to all of these significant players in Roman history from chapter to chapter.