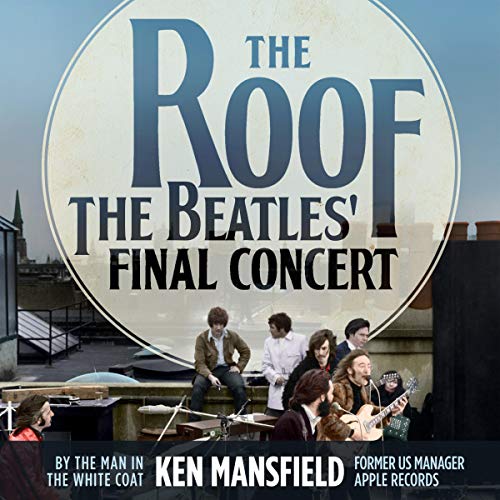 The Roof: The Beatles' Final Concert

Written by: Ken Mansfield
Narrated by: Andrew Totolos
Try for $0.00

He was there! Apple Records former US manager Ken Mansfield takes a touching and comprehensive look back on one of rock’n’roll’s most significant events, while bringing an insider’s perspective to the days leading up to those 42 fascinating minutes of the Beatles monumental rooftop concert.

There are moments in time that cause us to stop and take notice of where we were and what we were doing when they happen in order to commit the experience to memory - how it made us feel, who was there with us, why it felt important. January 30, 1969, was one of those moments.

There are those who were on the periphery of the event that day and heard what was going on, but as one of the few remaining insiders who accompanied the Beatles up onto the cold windswept roof of the Apple building, Ken Mansfield had a front row seat to the full sensory experience of the moment and witnessed what turned out to be beginning of the end. Ken shares in The Roof: The Beatles Final Concert the sense that something special was taking place before his eyes that would live on forever in the hearts and souls of millions.

As the US manager of Apple, Ken Mansfield was on the scene in the days, weeks, and months leading up to this monumental event. He shares his insights into the factors that brought them up onto that roof and why one of the greatest bands of all time left it all on that stage. Join Ken as he reflects on the relationships he built with the "fab four" and the Apple corps and what each player meant to this symphony of music history.

What listeners say about The Roof: The Beatles' Final Concert

Ken Does It Again!

Having read Ken’s two previous books on the Beatles, listened to him lecture, and talked to him in person, I was thoroughly entertained by his third informative book on John, Paul, George and Ringo. How about a fab fourth book, Mr. Mansfield?

Don’t waste your money and time

Biggest waste of Beatle fan audio book crap yet. This guy sucks. Says stuff like, “I was one of 2 people besides Yoko in the studio for a certain let it be session, when a song was being created... then he doesn’t even say what song.

Good story and very good narration but too much filler. The story was bloated with many parts retold multiple times.

While I enjoy anything Beatles I just found this book to be very average.

I admit that I was skeptical that a 5-plus hour book could be written about a 42 minute rooftop concert that occurred 50 years ago. After listening to it I remain skeptical, not that it could be done but that 5 hours was needed to do it.

Please don't misunderstand me. I am a true Beatles fan and love to learn details about their work together, the pretty and the not-so-pretty alike. The author does a great job setting the event in context of the times. He shares stories of key people at Apple Corps, his own professional journey, etc. I particularly enjoyed his look back at the end and what he learned is important in life.

I do appreciate Mr. Mansfield's effort sharing his experience, giving recognition to those who made it happen and why it was important in Beatles' history. I just think the same could have been done with, perhaps, 90 minutes less material.

Ken Mansfield is perhaps the most self centered person to ever put words to paper. He spent the first several chapters name dropping and talking about his place in music history. Seriously I can't listen to another word.

So much has been written by so many people who are attached to the Beatles tangentially or directly. Obviously Ken had an integral role in Apple. He has actually very little to say in my humble estimation, and keep saying the same thing over and over again. Like I said in my title it’s informative but all too redundant, and the guy probably thinks he can write but it’s just so much gilding the lily. He could’ve said a lot more in a mere brochure.

well done history of the project

Must Read for any major Beatles fan. Great book.

Great story. Very informative. It makes the reader feel that one is a part of the story.

Reminiscing about back in the day

The author is a record company executive who spends a few chapters talking about being on the rooftop specifically. Mostly the book is unique stories about the band, other participants involved w the concert(roadies, personal assistants), recording and the record biz. It is a lot like listening to your elderly uncle tell war stories: great material but a little longwinded. The narrator is excellent. To be honest, this is the kind of book to listen to while you are doing something else. I listened while I cleaned closets and it made the task go very quickly. NB there is one brief chapter near the end where the author discusses his Christian faith. Recommend for those looking another take on the material in the "Get Back" doc and/or the record biz in 1960s.

A Valuable Supplement to “Get Back”

This is an easy listen that flows from beginning to end. I read the hard cover version about five years ago, but after watching the Peter Jackson’s “Get Back”, this was a nice recounting from a different perspective. For Beatles fans this helps fill in more of the landscape of that time. Most valuable is Ken’s description of the personalities of some of the lesser known cast members such as Mal Evans, Neil Aspinal and Alan Parsons. Although this book stood on it’s own, it is also a nice supplement to Peter Jackson’s series. I highly recommend it to Beatles fans, musicians and music historians.