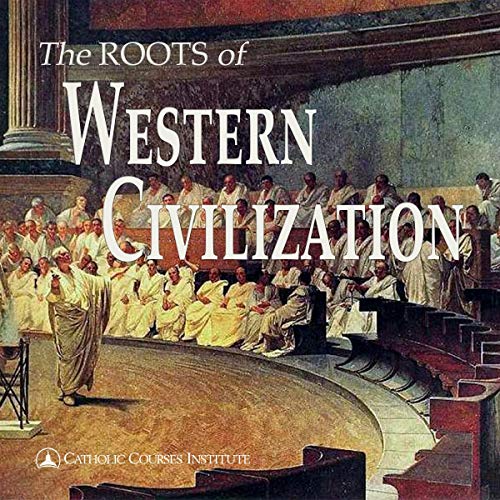 The Roots of Western Civilization

In this course, Prof. Anthony Esolen will examine ancient Mesopotamia, Greece, Rome and Israel, seeing the disappointment and Messianic longing in the pagan Roman poet Virgil, and the fulfilled Messianic longing among the prophets and the inspired authors of the Old Testament.

As Esolen unfolds: Fallen man worships power, and Jesus enters Jerusalem on the foal of a donkey. Fallen man listens to sophisticated and sly rhetoric, but Jesus praises God for revealing mysteries to fools and children, and concealing them from those who are wise in the world’s ways. Fallen man clings to his creature comforts, but Jesus gives his life away. And at that, he gives it away to his enemies - namely to us. Fallen man wants to rule, but Jesus emptied himself, becoming obedient until death, even death upon a cross.

Now, this changes the world entirely. We could fill a library with books on this change and still not plunged its depths. In this course, we will examine the ways in which even a pagan world anticipates this change, and we will end by considering the life of one man who discovered the radicality of this change upon the movements of his heart.

In what way does the pagan world cry out for a savior? How do the confessions of one man speak to the universal within all of mankind? To examine the roots of a Civilization is to return to its life-source - its philosophies, myths, laws, and religions, in short its culture.

Join Prof. Anthony Esolen as he journeys through the great literature of the ancient world discovering not only the timeless wisdom of such texts as the Theogony, the Aeneid, and the Confessions, but also their rich and broad impact on Western Civilization.

What listeners say about The Roots of Western Civilization

Chapters 7 and 8 are identical. Lecture 6 is missing. I love the lectures, but it is incomplete. Hopefully the publisher will see this and fix it.

the missing lecture! It's there now. I love this overview of Western civilizations from a literary perspective. Anthony Esolen is always wise and persuasive.

From ancient Mesopotamia, Greece, Rome and Israel to the threshold of the Medieval world, professor Esolen traces the messianic longings expressed in a representative book from each civilization: Gilgamesh, Hesiod’s Theogony, Virgil’s Aeneid, the Old and New Testaments, and St. Augustine’s Confessions. Among much else, you’ll learn the building blocks of civilization, the sources of pagan Greek worship, the meaning of Roman piety and, through contrast and comparison, a vivid understanding of the unique nature of the God of Abraham, Isaac, and Jacob.

Even if those are concepts with which you’re already familiar, this brief, insightful and intellectually satisfying reassertion of the truth refreshes the mind as well as the soul.

We need to meet

Amazing. we need to speak in person. You're missing some things....find me
-the mother
God bless all
Thesaintnat@yahoo.com