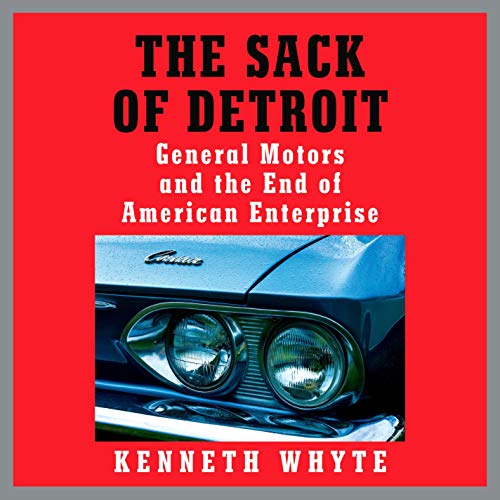 The Sack of Detroit

Written by: Kenneth Whyte
Narrated by: Charles Constant
Try for $0.00

A provocative, revelatory history of the epic rise - and unnecessary fall - of the US automotive industry, uncovering the vivid story of innovation, politics, and business that led to a sudden, seismic shift in American priorities that is still felt today, from the acclaimed author of Hoover

In the 1950s, America enjoyed massive growth and affluence, and no companies contributed more to its success than automakers. They were the biggest and best businesses in the world, their leadership revered, their methods imitated, and their brands synonymous with the nation's aspirations. But by the end of the 1960s, Detroit's profits had evaporated and its famed executives had become symbols of greed, arrogance, and incompetence. And no company suffered this reversal more than General Motors, which found itself the main target of a Senate hearing on auto safety that publicly humiliated its leadership and shattered its reputation.

In The Sack of Detroit, Kenneth Whyte recounts the epic rise and unnecessary fall of America's most important industry. At the center of his absorbing narrative are the titans of the automotive world but also the crusaders of safety, including Ralph Nader and a group of senators including Bobby Kennedy. Their collision left Detroit in a ditch, launched a new era of consumer advocacy and government regulation, and contributed significantly to the decline of American enterprise. This is a vivid story of politics, business, and a sudden, seismic shift in American priorities that is still felt today.

What listeners say about The Sack of Detroit

Some interesting facts about the auto industry in the beginning but it mostly hops to and fro to different non sensical anecdotes (there's literally a mini biography of Ralph Nader in here) which ends on a full throated NGO shill "for the better good".

Kenneth Whyte has done an impressive job thoroughly researching and clearly articulating the damage done by Ralph Nader not only to General Motors but also to American automobile manufacturing, in general. Particularly compelling is his epilogue in which he posits that a country that demonizes those who produce is bound to fail. The narration by Charles Constant is crisp. Thank you both!