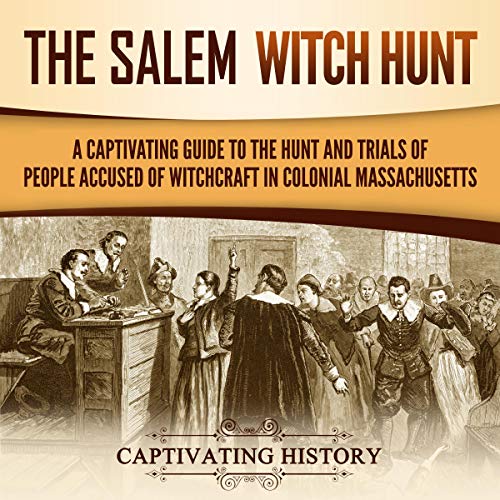 Written by: Captivating History
Narrated by: Edwin Andrews
Try for $0.00

If you want to discover the captivating history of the Salem Witch Hunt, then pay attention....

Decades after witch-hunting had begun to die down in Europe, North America was about to witness its bloodiest witch hunt in history. The Massachusetts of 1692 was a very different one to the state we know today. Populated by colonists, many of them a generation or less from life in an England bathed in religious turmoil, Massachusetts was not the safe haven that the fleeing Puritans had hoped it would be. Persecuted for their faith in Europe, the Puritans had pictured a kind of utopia founded on biblical principles. They saw the New World as a new beginning, a kind of second chance for humanity. It would be only 72 years after the arrival of the Mayflower that the events in Salem would make it blatantly obvious that humanity had already blown it again.

This is not the story of the trials. This is the story of its people. This is not an attempt to explain the events of 1692. It is an attempt to bring to life the victims who died so unjustly. In this audiobook, we will walk side by side with the destitute Sarah Good as she realizes that after having lost all she owns, her reputation, her baby, and even her life will still be taken from her. We stand at the bar with Rebecca Nurse, a sweet, little old lady who is sentenced to hang for what she must have perceived to be the most heinous of crimes. We witness George Burroughs at the gallows, a former minister now condemned to die for his supposed alliance with Satan, as he delivers a speech so stirring that it takes quick thinking from his enemies to prevent the crowd from rushing forth to cut him down. We feel our own breaths catching as we watch the cruel and greedy Sheriff George Corwin piling rocks onto the fragile 80-year-old body of Giles Corey, who is determined to die without entering a plea so that his sons will still get the inheritance he promised them.

Listen to this audiobook now!

What listeners say about The Salem Witch Hunt

I absolutely loved this book! By far one of my favourites! Learned so more then I had read in the past

The Narrator almost killed it for me. Glad I kept on with it, but it took a lot of effort.

For the casual historian

The author seems a professor; he does not make the listener feel like they are lost in his writing. Though there are no pictures to view, the listener can distinctly see the world that the accused and their accusers lived in. The author paints the scenes based on the documents recorded, he asks insightful questions to the reader, and his writing is unbiased.

Excellent book on the study of the Salem Witch

The author presents the information and then asks the listeners to stand back and weigh the evidence against the accused as if the listener were really there.

This book is well written, clear, concise, and an easily understandable read. The author has done his homework and pieced together all the information regarding the circumstances surrounding some of the accused.

Excellent presentation for someone getting their feet wet on the Witch Trials.

Concise and informative overview of the Salem Witch Trials. Easy to listen to and follow along with.

Woke me up to the evils of Christian superstitions. Sadly many fundamentalists still fear the witch when instead they should fear the folks who burned them alive.

Interesting and well put together

Overall this was an enjoyable, quick listen. Succinct but detailed, focused but expansive, this covered exactly what I was looking for. There’s a few errors in the narration (retakes etc) but well done in general. The only thing that took me out of it was the mispronunciation of towns in MA coming from a local - Billerica, for example, does not rhyme with America!!! No big deal, just caught me off guard

Terrific. Well researched and a good listen! I reach History and this will be a great source for a class I am teaching this Fall..

Good summary of the trials- enjoyable as a jumping off point for further, deeper research. The Audible version was ok, but less enjoyable as the “bass” was too high for many speakers in my home (blurred the words to just a jumble of vowel sounds), and a slight “hiss” in the background when the narrator paused.

This focuses more on the individuals of the trials, which is great because they were the actual victims. The trials were totally bonkers and ot is so sad what some went through. I wish dove deeper into the more brutal and gruesome things that happened, but it really wasn't this books intentions. Overall it was informative and there was a lot of info about the actual victims.