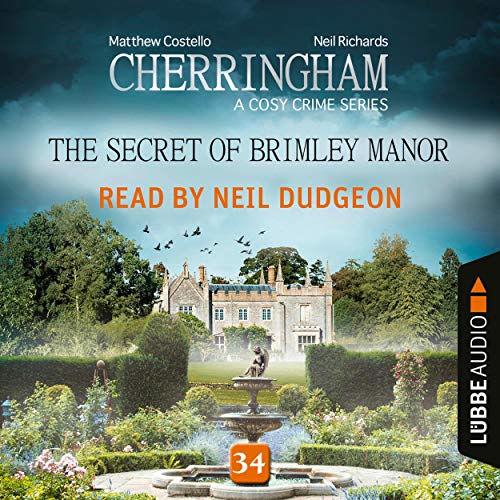 The Secret of Brimley Manor

Brimley Manor, home to an eccentric museum of oddities from its owner's lifetime of exotic travels also holds dark secrets. When a suspicious fire breaks out, the biggest question must be... was it just an accident? Sarah and Jack think not. As they begin to explore the history and people of Brimley Manor, they soon learn that this very curious place might also be quite deadly...

Set in the sleepy English village of Cherringham, the detective series brings together an unlikely sleuthing duo: English web designer Sarah and American ex-cop Jack. Thrilling and deadly - but with a spot of tea - it's like Rosamunde Pilcher meets Inspector Barnaby. Each of the self-contained episodes is a quick read for the morning commute, while waiting for the doctor, or when curling up with a hot cuppa.

Co-authors Neil Richards (based in the UK) and Matthew Costello (based in the US), have been writing together since the mid 90's, creating content and working on projects for the BBC, Disney Channel, Sony, ABC, Eidos, and Nintendo to name but a few. Their transatlantic collaboration has underpinned scores of TV drama scripts, computer games, radio shows, and the successful crime fiction series Cherringham.

The narrator of the audiobook, Neil Dudgeon, has been in many British television programmes including the roles of 'DCI John Barnaby' in 'Midsomer Murders' and 'Jim Riley' in 'The Life of Riley'. He is also known for his film roles in 'The Nativity', 'Sorted' and 'Son of Rambow'. In 2012 Dudgeon starred as 'Norman Birkett' on BBC Radio 4's Afternoon Play series written by Caroline and David Stafford.

What listeners say about The Secret of Brimley Manor

Without all the verbal diarrhea of some blowhards this book is a great short listen. Well worth the time and cost to enjoy

Have heard all of the now 33 (that have audio versions so far) stand-alone shorts as well as the longer books. A step above most cozy mysteries and delightful characters in an absolutely charming environment. If you haven’t tried any of this series, you really could start anywhere and enjoy the story without knowing all the background. But if you do that and you enjoy whichever one you started with, you really should go back to the first. You’ll enjoy it as well and have the pleasure of another 30 plus adventures awaiting you.

The Secret of Brimley Manor

I really enjoy these cosy mystery murders, love the way Jack and Sarah solve them and each one just gets better. Love Cherringham and the country life. Will keep on reading / listening to them. The narration is very good.

Neil Dudgeon is the perfect narrator

I know that I am getting closer to the end of this series and it makes me sad. I love it so very much. Every story is so wonderful. Mr. Costello and Mr. Richards are a great duo. And Mr. Dudgeon, well what can I say? He is awesome!!!

Great story complete with old manor house and secret rooms. Jack and Sarah are asked by the manor’s trust to investigate a fire that destroyed musical instruments and part of the house. Suspects are plentiful including the heir, the gardener, the security guards, and the student interns. Great narration by Neil Dudgeon.

I hope that Matthew Costello and Neil Richards keep writing! I love these stories and have listen to all of them so far. Best narrator ever is Neil Dudgeon!
Can’t wait to start the next story!!

Best of the series; all a fun read. Why fifteen words? Brevity is an attribute after all.

Love Jack and Sarah! Their interaction never seems contrived. This was a particular favorite! MORE Please!!

I absolutely loved this book. it's a must read. and the Narrator was perfect. loved it

The good thing about these is that they are short on listening time but long on logic and mystery. You can start with any one and not feel lost, but it only makes me want to binge read. This one is fun because of oddities inside the building as well as the building itself. Always a good read!