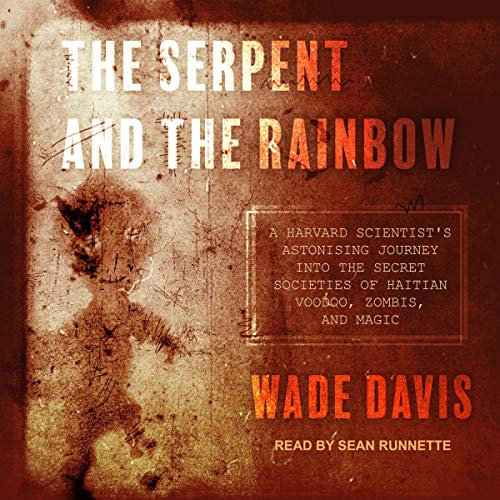 The Serpent and the Rainbow

Written by: Wade Davis
Narrated by: Sean Runnette
Try for $0.00

A scientific investigation and personal adventure story about zombies and the vodoun culture of Haiti by a Harvard scientist.

In April 1982, ethnobotanist Wade Davis arrived in Haiti to investigate two documented cases of zombies - people who had reappeared in Haitian society years after they had been officially declared dead and had been buried. Drawn into a netherworld of rituals and celebrations, Davis penetrated the vodoun mystique deeply enough to place zombification in its proper context within vodoun culture. In the course of his investigation, Davis came to realize that the story of vodoun is the history of Haiti - from the African origins of its people to the successful Haitian independence movement, down to the present day, where vodoun culture is, in effect, the government of Haiti's countryside.

The Serpent and the Rainbow combines anthropological investigation with a remarkable personal adventure to illuminate and finally explain a phenomenon that has long fascinated Americans.

What listeners say about The Serpent and the Rainbow

Absolutely beautiful book with the perfect narrator for David's prose. Here's hoping they record One River as well.

Enjoyed this very much! It may be an older title, but I still found it very interesting.