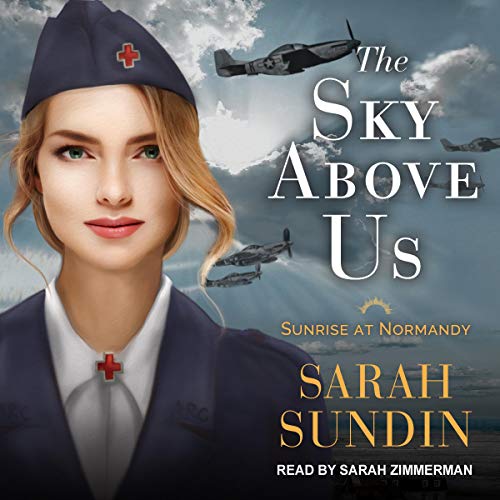 The Sky Above Us

Written by: Sarah Sundin
Narrated by: Sarah Zimmerman
Try for $0.00

Numbed by grief and harboring shameful secrets, Lt. Adler Paxton ships to England with the US 357th Fighter Group in 1943. Determined to become an ace pilot, Adler battles the German Luftwaffe in treacherous dogfights in the skies over France as the Allies struggle for control of the air before the D-day invasion.

Violet Lindstrom wanted to be a missionary, but for now she serves in the American Red Cross, where she arranges entertainment for the men of the 357th in the Aeroclub on base and sets up programs for local children. Drawn to the mysterious Adler, she enlists his help with her work and urges him to reconnect with his family after a long estrangement.

Despite himself, Adler finds his defenses crumbling when it comes to Violet. But D-day draws near. And secrets can't stay buried forever.

Best-selling author Sarah Sundin returns listeners to the shores of Normandy, this time in the air, as the second Paxton brother prepares to face the past - and the most fearsome battle of his life.

What listeners say about The Sky Above Us

No matter what I say in this review, I can't begin to do justice to the magic of Sarah Sundin's storytelling. And this time, I listened to the audio version which enhanced my enjoyment even more. It kinda felt like I had traveled back in time to the 1940s and was huddled next to my radio absorbing every precious word of a serial installment broadcasting over the BBC. The historical ambience is over-the-moon delectable! Being forced back into my 21st century reality got just plain annoying when I had to do real life stuff. Much preferred hanging out with Violet and Adler.

Sundin creates images with her words -- from the every day details of life on an Air Force base to the nail-biting, action-packed aerial fight scenes to the emotionally charged romantic entanglements of a hero and heroine trying to make sense out of the challenges they face.

And what a story! The way it unfolds and builds is sheer perfection. Sarah Sundin is one of my favourite authors because she doesn't shy away from including realistic, transforming faith threads and the inspiration in this book is heart-stopping! It gave me pause, had me grappling and reassessing situations in my own life and I so love being challenged by my fiction!

So, in case you haven't clued in by now -- I rather liked (scratch that -- LOVED) The Sky Above Us. Highly recommended. Really, I'd kind of like to bully everyone into reading it but that would be wrong...even if y'all thanked me for it later. :-)

I just discovered Sarah Sundin’s writing with the very first in this series, “Sunrise at Normandy”, and I love it!
I hope there will be another book to complete the series about the last and youngest brother.
This is historical fiction in the genre of WWII and WWII Home Front that I absolutely cannot get enough of 😊
However, if you are offended by the Christian Faith being an integral part of the characters lives, then perhaps you may not enjoy this book, even though it isn’t the least bit judgmental.
I’m a Catholic Christian and I have read some “Christian” authors who put down the Catholic Faith as opposed to their own “Evangelical Protestant” beliefs. But, Ms. Sundin does not do this and even respects Catholics and other Christian Faiths.
I intend on listening to her other books on Audible and I REALLY HOPE AUDIBLE will consider making all her books available on audio!

loved this just as much as it's predecessor and can't wait till next one! all books I've read so far by this author have been great reads! love the history!

book 2 was masterfully interwoven with book 1....again the narrator draws you into the character's thoughts and feelings...wonderful book

The setting and description of personal lives surrounding D-Day are interesting and a great glimpse into that time in history. But it is way to preachy.