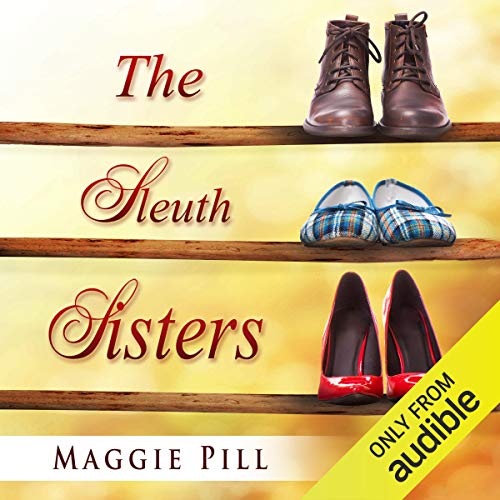 What listeners say about The Sleuth Sisters

Three interesting women protagonists, an interesting mystery, and no in depth sex scenes. A good book in my opinion. This author understands what to write about and what to leave out to intrigue a reader over age 40.

Good basis for more stories, although one would hope that not all the mysteries include deaths or the small town will be bereft of occupants soon. One of the sisters, Barbara, has a spelling and grammar fetish. It's a funny gambit. She goes around fixing signs and writing letters, anonymously, to the paper. Therefore I was quite surprised to hear Barbara's narrator mispronounce detritus.
Interesting idea to have 3 narrators, one for each sister, but they could stop emphasizing so many words and sound more natural. The sisters mostly take care of themselves and each other and only call in the guys when absolutely necessary.
Looking forward to the next book.

Not Your Typical Tea Cozy Mystery

Where does The Sleuth Sisters rank among all the audiobooks you’ve listened to so far?

Although I'm in the same age group as the sisters in this story, I normally do not read mysteries with the sleuths in this age group. But I found it very entertaining and a good who done it.

Barbara was my favorite sister. Her O.C.D. high jinks for being a grammar police correcting ninja were hysterical. I'm sure if she read this she would have a field day making corrections and comments.

Each character was performed well, I really didn't find one performance better than another. It is nice to listen to different narrators take on the different parts. I hope they continue to do so in future Sleuth Sisters mysteries.

Again I would have to say any of the actions Barbara took in the performance of a grammar police enforcer I found very entertaining. I have a sister very much like this. She too writes to magazines, papers and even news anchors, informing them of their errors.

These three middle age sisters resemble the three blind mice. But keep pecking away until the case is solved. Some of the book is a little drawn out in spots for my taste. But has the possibility of being a good series. So hope Maggie Pill continues with it and brings out another book. As for the narration? It was great as far as I was concerned. They made each of the sisters into separate recognizable characters. The only suggestion I would venture to make. Would be to add a male narrator for the male voices.

I truly enjoyed this book - the first in the series. The author brings you to Northern MI through the lives of 3 sisters. Having 3 narrators enhances the story.

I suppose this one might qualify as chick-lit, although I could easily see a similar story featuring three brothers with the same family dynamics. At first, I didn't really care for the youngest sister, Retta, much at all; she seemed as though she did get far in using her looks. Barb, the oldest, came off as a tad cold, although she had her moments. As the book went on, I did feel for the middle sister, Faye, having to play "double agent" with both Barb (in terms of keeping Retta from officially joining the agency), as well as Retta (maintaining friendly contact in spite of that). By the end, I was left with the feeling that Barb and Retta are just so different that they can't really identify with each other much, rather than any sort of actual clear animosity. As a bit of a spoiler, there's a clue that Retta's involvements will be "tolerated" on an unofficial basis, even if her sisters aren't ready to have her join the agency as a partner; Retta seenms as though she'd be okay with that, so I would be as well.

Three stars instead of four owing to the plot itself, which like many series set-up books isn't the strongest. I lost track a few times of who was where doing what with the rotating narration, feeling that it wasn't worth the time to keep going back.

If possible, I'd strongly recommend listening to the audio edition, where having three narrators with very distinct voices helps the reader get into character. That's not to say that when each has to voice the others as part of dialogue it didn't work. Barb's reader came across successfully as an older, never married attorney; I can relate to her surprise, and slow acceptance, when one of the characters shows an unexpected interest in her. Faye sounded a bit ... flat to me at first, but I came to realize that her life had been much ... quieter (shall we say) than her attorney sister, or more aggressively flamboyant one. Interestingly, she's the only one given a pronounced Michigan accent. Retta's voice came across as the closest to one I might expect for a cozy mystery audio - a bit snarky, though not obnoxious; her persona keeps the book from just plodding along with the more serious voices of her sisters.

I'm quite interested to see how a second adventure would turn out.

Barb, Faye, and Retta are three sisters who have very little else in common. Different personalities, different lifestyles, and different ideas about each other. This contemporary mystery was written very well and the narrators bring the sisters to life wonderfully. Very enjoyable!

Two sisters start a PI business, so what could go wrong? Third sister of course! Perhaps it is because I had two sisters that I could relate to this story so well, or maybe it is just an excellent story!!

The different narrators helps to keep things straight and it is a great cozy mystery. I couldn't help but love Gabe. Give it a try, I really think you will like it.

A mystery until the end with no clues to the real culprit. Refreshing story with a refreshing presentation.

The story is a light, enjoyable read, but the narration is unbearable. Instead of simply reading the author's words, the readers attempt to act them out. I have listened to countless audible books, and never before have I encountered one where various characters are represented by different readers. The different voices would be perfectly acceptable if they didn't add chuckles to their words, pathos to their voices, heightened drama and volume in tense situations, and even choking sobs during a sad memory. What could be an entertaining mystery, given the comical tension between three sisters starting a detective agency, is thereby turned into a maudlin and embarrassing performance piece.

Would you be willing to try another book from Maggie Pill? Why or why not?

Possibly, but I would read it, not listen to it.

No, there is not enough depth to the story to create an interesting feature length film.