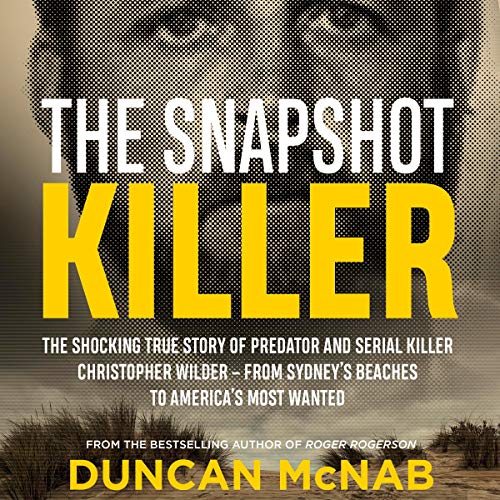 Written by: Duncan McNab
Narrated by: Michael Carman
Try for $0.00

Christopher Wilder was about as bad as they get.

A predator and serial killer, he first came to the attention of police in Sydney when, as a teenager in 1963, he was charged with rape. A good behaviour bond was not a deterrent, and over the years his crimes escalated.

After moving to the USA in his early 20s, Wilder continued to perfect his vile and deadly trade. He was a chameleon with a modus operandi refined over the decades, luring young teenage girls with the promise of a career as a photographic model. His final depravity was a six-week spree of abduction, sexual assault and murder, crisscrossing the USA and putting him at number one on the FBI's Ten Most Wanted list.

Wilder's horrors are still being uncovered. He is now a prime suspect for the infamous 1965 Wanda Beach murders, one of Australia's most notorious unsolved crimes. The Snapshot Killer is a masterful and shocking account, by the best-selling author of Roger Rogerson, of how this monster was able to hide in plain sight. And how he was finally caught.

What listeners say about The Snapshot Killer

Definitely worth the listen

This was an incredible book that the author took a lot of time to research, talk with the victims of Christopher Wilder and with his family. A thorough detailed account of his life to the end.

Not for the feint of heart

The evil that man is capable of is in full display by Christopher Wilder. The horrors that he put his victims through is shocking. For the families of the victims who have never been found the nightmare will never end. He benefited from the time period of these crimes, use of DNA years away from being a useful tool for police.

This audiobook bothered me a lot. It was terribly boring and I found myself constantly missing information but unlike other books, I didn't go back and rewind. I figured it was less I had to listen to.

The narrator drove me insane. He did HORRIBLE impersonations of men and women and sometimes even quotes directly from victims, which was just terrible.

I couldn't wait to be done this. I am sorry to say it because reading the book could have been a different experience but overall the story was dull to me. I only started enjoying it at chapter 28.

This is a straightforward account of Christopher Wilder's lengthy and far-flung killing rampage. His method of entrapment was as clever as it was evil, and reminds us to warn our daughters against stranger danger, no matter how enticing the offer.

Narration is fine, once you adjust to the Australian accent.

Good research. Fascinating tale of a sadistic killer. Can not believe I had never heard of this serial killer.

Excellent research for a complete story

The thorough research of this subject really comes thru in the book and is terrific. I was in high school at the time, so had never heard (or don't remember hearing) anything about this sicko, so was interested in listening to the story. Amazing survival of the 2 girls that were smart enough to play their cards right & managed to live to tell their stories. I had a feeling this would end in either a self-inflicted suicide or suicide by cop. I figured this sick, sadistic man would take the coward's way out so he didn't have to face a trial. And I feel horrible for all those families who didn't get the answers they deserved because he took his secrets to the grave. :(

Why haven’t I heard of this guy

I am surprised I never heard of this guy. He was after Ted Bundy, with many of the same characteristics, however not the infamy. If you have an interest in serial killer books this is for you. The narrator is great, and pretty fast paced, although there were times I sped it up. This guy’s portfolio of killings seems beyond Ted Bundy and you will enjoy the book. Just stick with it as it might take a chapter to get it to it. Fascinating

I lived in Newark NY when Wilder went through in April 1984...my fiancee lived in Penn Yan..I remember my father not wanting me to drive to Penn Yan because we heard about one of his victims being found there. Victor NY is also close by and I found out years later that someone I worked with was assiciated with a member of one of his victims family. Therefore I found this book to be very interesting and fact filled.

Binge listened from start to finish. Excellent. Very sad so many families have no answers to this day.

One of three best...

Good True Crime Case Story. This sicko started killing in the 1960's and didnt stop until the 1980's. He would travel between Australia and America. Right up there with the BTK Killer!!!