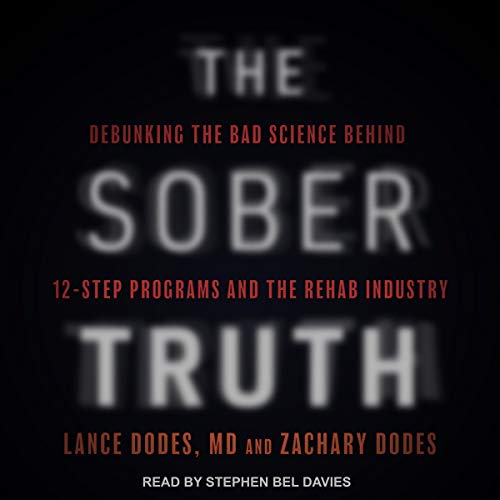 AA has become so infused in our society that it is practically synonymous with addiction recovery. Yet the evidence shows that AA has only a 5-10 percent success rate - hardly better than no treatment at all. Despite this, doctors, employers, and judges regularly refer addicted people to treatment programs and rehab facilities based on the 12-step model.

In The Sober Truth, acclaimed addiction specialist Dr. Lance Dodes exposes the deeply flawed science that the 12-step industry has used to support its programs. Dr. Dodes analyzes dozens of studies to reveal a startling pattern of errors, misjudgments, and biases. He also pores over the research to highlight the best peer-reviewed studies available and discovers that they reach a grim consensus on the program's overall success.

But The Sober Truth is more than a book about addiction. It is also a book about science and how and why AA and rehab became so popular, despite the discouraging data. Dr. Dodes explores the entire story of AA's rise, from its origins in early fundamentalist religious and mystical beliefs to its present-day place of privilege in politics and media.

"A searing critique of the rehab industry." -Psychotherapy Networker

What listeners say about The Sober Truth

Great informative book. Only complaint is I had to pull out the dictionary alot for some terms used.

A necessary read for those with genuine interest

After three years of success addressing personal addiction issues and intensive reading of most every source available, this book is at least within the top three most revealing of the problems and potential solutions to addiction.

this does not help anyone

ill keep using it until science finds a better way

Absolutely True! Thanks for spelling it out

I love this book! It breaks down the frustratingly obvious problems with 12 step groups and rehabs in a logical way. It explains why they are highly ineffective for most people and also points out the harmful outcomes of using AA and NA as the gold standard for addiction treatment. Very good book :)

Excellent. Debunks AA nonsense. Still confuses abstinence with 'sobriety' though. Worth a listen. AA believers will hate it, but then science isn't their strong point is it?

Just a continual bashing of AA. Nothing but bashing of AA and no help otherwise. I rather have AA, than nothing; but, his step by step-not

Finally, somebody that understands me. I've been struggling with alcoholism for 15 years and I have gone to thousands of anonymous support groups. The author eloquently articulated what I have been feeling and thinking for years and years. It was very reassuring to hear his point of you, backed up by very compelling facts. Everybody has by default recommended that I pursue AA, and if that doesn't work, try more AA. I am then failure because I was unable to abide by what is stop by the majority to be a fool-proof system where if success is not achieved, it is the fault of the user and no other explanation is possible. Thank you for writing this eye opening book, a must-read for anyone affected by addiction.