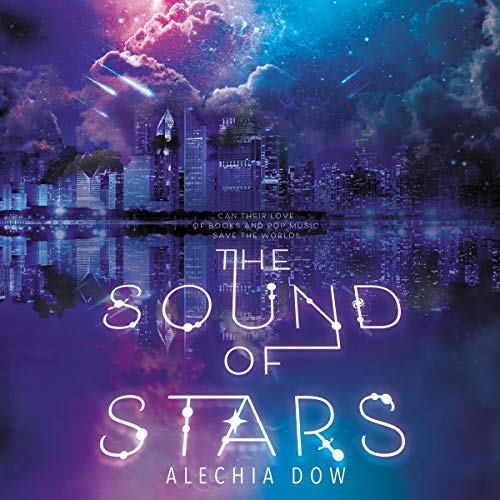 The Sound of Stars

“This debut has it all: music, books, aliens, adventure, resistance, queerness, and a bold heroine tying it all together.” (Ms. Magazine)

Can a girl who risks her life for books and an Ilori who loves pop music work together to save humanity?

When a rebel librarian meets an Ilori commander....

Two years ago, a misunderstanding between the leaders of Earth and the invading Ilori resulted in the death of one-third of the world’s population. Today, seventeen-year-old Ellie Baker survives in an Ilori-controlled center in New York City. All art, books and creative expression are illegal, but Ellie breaks the rules by keeping a secret library.

When young Ilori commander Morris finds Ellie’s illegal library, he’s duty-bound to deliver her for execution. But Morris isn’t a typical Ilori…and Ellie and her books might be the key to a desperate rebellion of his own.

“The Sound of Stars is a marvelous genre-bending debut." (The Nerd Daily)

“The Sound of Stars is a stunning exploration of the comforts that make us human and the horrors that challenge our humanity.” (K. Ancrum, author of The Wicker King)

"This book has everything! Aliens set on conquering earth! A determined heroine with a hidden stash of books! And the power of music and stories to give those with every reason to hate the power to love. Who could want anything more?" (Joelle Charbonneau, New York Times best-selling author of The Testing and Verify)

“An absolute must-read for everyone.” (Book Riot)

“Dow's debut is a testament to hope and the power of art.” (Buzzfeed)

Also by Alechia Dow:
The Kindred

What listeners say about The Sound of Stars

I loved the story about the YA book reading human girl crossing paths with an alien invader hiding his own secret obsession for music. Fast paced with no filler. My only problem with the audiobook is with the performance. Every time the narrator is supposed to say “library”, she says “li-berry”, to the extent that “librarian” is even “li-berry-an”. Also, the main character is M0Rr1s, with the narrator pronounces as M-zero-one-nes, completely ignoring the Rs. For much of the book I couldn’t figure out why some humans were changing his name to Morris, until I finally went back to the printed description and saw his name. Had the narrator pronounced it M-zero-R-R-one-S (like it should be) the nickname would have made sense. Was super surprised in the apparent lack of quality assurance over the recording. Anyway, if you can get past those things, it is a good story and beyond pronunciation mistakes, the narrator otherwise did a good job.

The Perfect Companion for a Roadtrip

Wow, this was an incredible surprise! This story kept my attention for a 10-hour car drive. Literally, did not do anything else on my drive but listen to this, and I loved it! The story is fresh, hopeful, adorable, and sprinkled with incredible literary & pop-music references. All of Morris's chapters are titled with a song, so I would pause the audiobook after each chapter and listen to the accompanying song. It really helped me fully immerse myself into the emotions of the book & characters. I now have a whole Spotify playlist titled "Sound of the Stars" with all the songs mentioned in this book: like a beautiful book soundtrack. THAT'S how much I loved it! Try it out!

This book is SO good

I binged all the way through. its the best book I've read in a long time

This book was so painful. There is a story here but the author got lost, words for the sake of words, lost. The narration, I don’t even know what to say except maybe work needs to be done on enunciation! Save yourself and your credit!

Loved it! It was meaningful, romantic, sci-fi, dystopian and powerful. We’ll worth the money!

Perfect for a road-trip.

My husband and I listened to this on a cross country road trip. It was perfect and we’re hoping for a sequel for the next trip.

I love this book and will listen to it again. It’s so modern, includes current day issues in a post apocalyptic era. The beings and humans in this book mixed with books and music is so inspiring to me because I feel the same about music and books. I found my new favorite author- thank you!

I LOVED THIS BOOK SO GOSH DARN MUCH, MY GOSH GIVE ME A THOUSAND MORE BOOKS IN THIS UNIVERSE AND ILL BE JUST LIKE JANELLE AND CARRY THEM ALL UNTIL THE END OF TIME!

Brown girl with stars in her eyes.

This was a beautiful, honest depiction of a young black girl with conflicting feelings about her world and what is to come, trying to hold on to hope. I loved this story.

What an enchanting novel. I dearly hope there is a book two coming in the future!