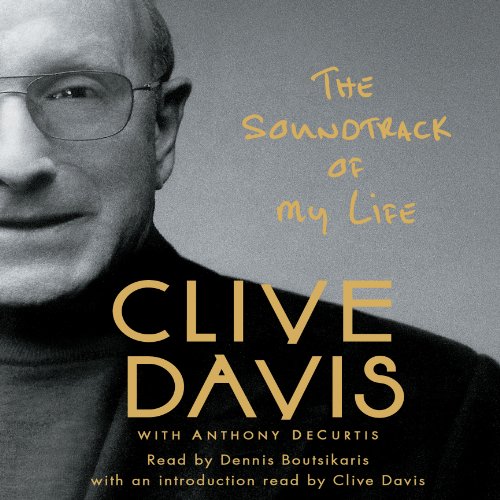 The Soundtrack of My Life

In this star-studded autobiography, Clive Davis shares a personal, candid look into his remarkable life and the last 50 years of popular music as only a true insider can.

In the history of popular music, no one looms as large as Clive Davis. His career has spanned more than 40 years, and he has discovered, signed, or worked with a staggering array of artists: Whitney Houston, Janis Joplin, Simon and Garfunkel, Barry Manilow, Patti Smith, Lou Reed, Dionne Warwick, Carlos Santana, The Grateful Dead, Alicia Keyes, Kelly Clarkson, Jennifer Hudson, and Aretha Franklin, to name a few. He has been inducted into the Rock and Roll Hall of Fame, received a Lifetime Achievement Grammy, and hosted the world’s highest profile parties.

In this personal account, Davis tells all, from becoming an orphan in high school and getting through college and law school on scholarships, to being falsely accused of embezzlement and starting up his own record company, J Records. His wealth of experience offers valuable insight into the evolution of the music business over the past half-century and into the future.

Told with Davis's unmatched wit, frankness, and style, Clive exposes a trove of never-before-heard stories - some hilarious, others tragic, all revealing - that will captivate and inspire all music lovers.

What listeners say about The Soundtrack of My Life

The soundtrack of our lives too

In each chapter, Davis tells stories behind the studio walls of some of the creative and music business moments of the most amazing musicians in the last 60 years. his tremendous career also yields wisdom that can be applied to other businesses and creative enterprises. A long audio book, bought worth the time.

If you are looking for insight into various artists and the music industry, you'll still be searching after 20-plus hours of drivel

Has The Soundtrack of My Life turned you off from other books in this genre?

Would you listen to another book narrated by Dennis Boutsikaris and Clive Davis ?

Did The Soundtrack of My Life inspire you to do anything?

I would not read another book by Clive Davis. I thought the narrator did a fine job. He couldn't fix the problems with this book.

Has The Soundtrack of My Life turned you off from other books in this genre?

I didn't love the book but I didn't totally hate it either. I just had to take it in small doses. There were bits of information but this book is all about him and the great things he did. He apparently never made a mistake, gave nothing but great advice and wasn't very personally connected to his artists. It was more of a history of contracts than a history of artists and relationships with artists.

Close up look at the evolution of the recorded business over the past 30 or so years. Lots of great detail on personalities, as well as interesting events. I've been listening to Audible for 14 years, and the narration performed by Dennis Boutsikaris was, by far, the best reading I've ever heard. The content was 5 star. The narration was 7 star.

I learned much about the industry

Each signing sounded similar to the last. Afraid of a lawsuit perhaps. Overall I am glad that I read it but also glad it is over

Who would you have cast as narrator instead of Dennis Boutsikaris and Clive Davis ?

Do you think The Soundtrack of My Life needs a follow-up book? Why or why not?

No, this one was too drawn out as it was.

Clive Davis was an individual who apparently has been in the right place at the right time most of his life. He is a quintessential businessman who followed his intuition and passion.

What would have made The Soundtrack of My Life better?

If someone else would have read it for him so it didn't come off so self-serving.

What could Clive Davis have done to make this a more enjoyable book for you?

Not have bragged so much.

Who would you have cast as narrator instead of Dennis Boutsikaris and Clive Davis ?

Yes. It showed what you can become when your ego runs rampant

Wish he would go away.

This book was filled with so many affirmations. As a rising music executive I’ve been able to identify a lot of likeness in the decisions and reasons Mr. Davis operated the way he does and still to this day.

I love this book for so many reason! To hear such an in depth explanation of the "behind the scenes" of the music industry, from someone I highly respect, was amazing! Thank you Clive for share your story and all you've done for music!! #Inspired

This book should have been titled: "The History of Arista Records" because it was about the record company not Clive Davis' life.

Fascinating look inside the music biz!

Yes, especially to business and law students about best business practices and for music lovers everywhere about how great music was nurtured by a fan who was also a realist.

What was one of the most memorable moments of The Soundtrack of My Life?

His evolution from a law firm associate to a music executive and his genuine love of music.

What about Dennis Boutsikaris and Clive Davis ’s performance did you like?

Dennis was great and nuanced. The writing was very good and very well edited.

When Clive took custody of his kids and respected his wife's need to find herself.

a fum lesson in history of contemporary music