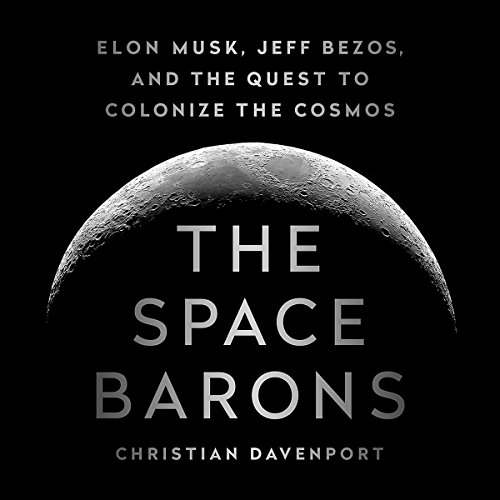 Written by: Christian Davenport
Narrated by: Will Collyer
Try for $0.00

The historic quest to rekindle the human exploration and colonization of space led by two rivals and their vast fortunes, egos, and visions of space as the next entrepreneurial frontier

The Space Barons is the story of a group of billionaire entrepreneurs who are pouring their fortunes into the epic resurrection of the American space program. Nearly a half century after Neil Armstrong walked on the moon, these Space Barons - most notably Elon Musk and Jeff Bezos, along with Richard Branson and Paul Allen - are using Silicon Valley-style innovation to dramatically lower the cost of space travel and send humans even further than NASA has gone. These entrepreneurs have founded some of the biggest brands in the world - Amazon, Microsoft, Virgin, Tesla, PayPal - and upended industry after industry. Now they are pursuing the biggest disruption of all: space.

Based on years of reporting and exclusive interviews with all four billionaires, this authoritative account is a dramatic tale of risk and high adventure, the birth of a new Space Age, fueled by some of the world's richest men as they struggle to end governments' monopoly on the cosmos. The Space Barons is also a story of rivalry - hard-charging startups warring with established contractors, and the personal clashes of the leaders of this new space movement, particularly Musk and Bezos, as they aim for the moon and Mars and beyond.

"A must-read. A compelling account of how today's self-made tycoons are driven to change our world and our relationship with outer space. This is distinctly an American story, nowhere but America could these Space Barons rise, thrive, and succeed. Follow their journey into the future." (Dr. Mark Albrecht, executive secretary of the National Space Council under President George H. W. Bush and author of Falling Back to Earth: A First Hand Account of the Great Space Race and the End of the Cold War)

"Readers will thrill at this lucid, detailed, and admiring account of wealthy space buffs who are spending their own money, making headlines, producing genuine technical advances, and resurrecting the yearning to explore the cosmos." (Kirkus)

"Starting with a blank canvas, Christian Davenport has painted a comprehensive portrait of some of the most influential leaders in commercial space, and indeed of the industry itself. Well-researched and entertaining, The Space Barons gives both a rich texture to the beginnings and a tantalizing outline of the future of commercial human space travel." (Michael Lopez-Alegria, former NASA astronaut, past president of the Commercial Space Flight Federation, and principal, MLA Space, LLC)

What listeners say about The Space Barons

A fantastic look inside the privatization of space and the “barons” leading the charge. Well worth the read/listen and the narrator did a great job. Highly recommend for anyone interested at all in the future of mankind in the cosmos.

Great summary of the events to date of the new Space Race.

to the Moon & beyond!

very informative.
easy listening & inspirational.
We should be proud of the dream of Space.

It was a lovely read, and of course in some sense it’s written to meet the rather interesting trend of space exploration and energy and that is likely to continue this century. Having said that, I enjoyed it but found it could be shortened.

The book we've all been waiting for. I've been deeply engaged in this industry since the start of the incredible story that Davenport tells and I can say that this is the most comprehensive and professional treatment of the commercial spaceflight revolution to date. The author is a professional reporter and a fine wordsmith who understands his context and characters. He weaves a tale of adventure, excess and excitement on the final frontier that will keep even non-space cadets enthralled. This is a character based study and is not particularly distracted by the technologies or the data. You won't find the seconds of ISP rating on the latest SpaceX second stage engine configuration or the coefficient of drag on Virgin's VSS Unity. What Davenport does in nail the big personalities and unusual motivations that drive this generations boldest entrepreneurs to go where none have gone before.

The narration is also excellent. Collyer conveys the tension and enthusiasm of the story without distraction. He gets the names and technical pronunciations correct as well (a thing that always bugs me in tech books).

"Space Barrons" is a great summer read for anyone but it is a must-listen for any aspiring Jeff Bezos, Richard Branson or Elon Musk. I hope they all download it and are motivated to do impossibly great things someday, themselves.

This book was 2-3 times longer than it needed to be, which means too much filler and an overall boring experience. Bummer.

A background on modern space ventures

Interesting text on the space ventures of Musk, Besos, and Branson. A bit repetitive though.

A great history of the private space business sector. I definitely recommend. Have it read at 1.35x

I've been fascinated by space travel since I was a kid--I went to Space Camp in Huntsville twice. One time our team won "Best Mission" and I'm proud to say I was Commander of that mission.

Unfortunately, to date that highlight of my space career was when I was 13 years old. "The Space Barons" reignited that childhood spark and wonder for what space travel can ultimately be, while providing some insight into the modern-day commercial space race that's shaping up... its huge upside... and the very real risks that come with it.

It's tough to humanize billionaires, but Davenport does it with ease. Sometimes unintentionally, when Jeff Bezos makes a very (ahem) in retrospect hilarious comment about his "really big rocket" he's working on... but I digress...

Really great book and well-performed for any space nut!

If you’ve read other books on Bezos or Elon, some of this content will be repetitive. Overall - very good, quick read.

It said this headline was optional but it was not

I really enjoyed this book. It was interesting to read about the struggles that were over come. It did leave me wanting as the book only gets to 2017.

This is a great book on the trials and tribulations the private sector has faced building rockets. Mostly about Musk, Bezos, Branson and some others.

Book has good summary but lacks more in depth research

Book provides a good brief summary of space companies and challenges it faced. This book lacks more research, work into future. Most of events mentioned in the book would be known to someone who followed space news or social media.

Nonetheless a great book for someone to understand about emergence of private industries. It would be exciting to see what lies ahead in space entrepreneurship where only national governments have been a player so far.