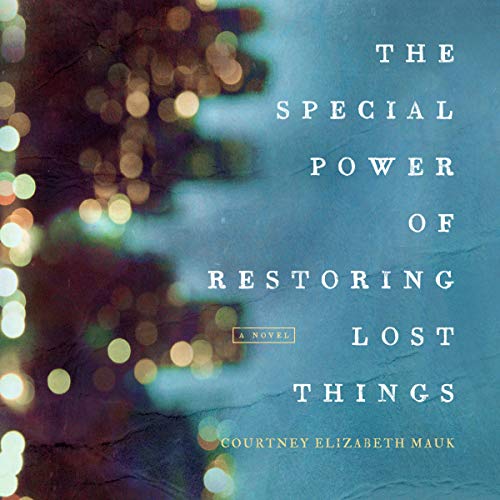 Set against a layered Manhattan landscape, The Special Power of Restoring Lost Things explores a fractured family through the alternating perspectives of the mother, father, and brother of a young woman during the aftermath of her disappearance. A year of silent but collective anguish culminates in the fateful 30 hours after a body with a striking resemblance to hers is found, and we see her buttoned-up Upper West Side family spiral in different, dangerous directions: Her mother, Carol, nearly comatose by day, comes alive at night in a vigilante-like attempt to track down her daughter's killer. Her brother, Ben, once the "good kid," adopts her bad habits along with her former friends who may have been complicit in her death. And after failing to keep his family from splitting apart, her seemingly stoic father, Drew, finally allows himself to crack.

In her third novel, Courtney Elizabeth Mauk presents a nuanced character study and offers a jolting and unforgettable portrait of a family's struggle to survive.

What listeners say about The Special Power of Restoring Lost Things

Underwhelmed by the ending-extremely anticlimactic. A lot of time spent on creating complex characters only to just end the story abruptly.

A young woman missing for a year finally turns up. Her mother, father and teenage brother, still dealing with their initial grief, react in different ways. A short, depressing novel that, for me, has no redeeming qualities. The characters are unsympathetic, underdeveloped. The story goes nowhere. There is nothing of interest to latch onto.

The big mistake, in my opinion, is the shifting narrative point of view between the surviving family members. The brother's story, as he travels the world of his sister's friends, trying to figure out what happened to her, is the only one that has the seeds of a good book. That should have been the whole story. But too much time is wasted with the parents.

This was a Kindle First audio companion that I chose because it is set in my neighborhood, the Upper West Side of Manhattan. But other than a couple of references to Fairway and the #1 train, there is no sense of the place. Taking a shot in the dark with Kindle First has been rewarding -- until now.

Horrible book! Story was very weird with a very odd ending. The narrator was terrible. She spoke in a halting manner as if every few words was a new sentence. Very annoying.