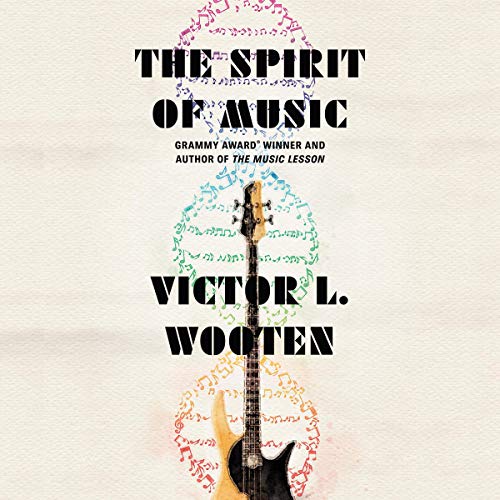 The Spirit of Music

Grammy Award-winner Victor Wooten's inspiring parable of the importance of music and the threats that it faces in today's world.

We may not realize it as we listen to the soundtrack of our lives through tiny earbuds, but music and all that it encompasses is disappearing all around us. In this fable-like story three musicians from around the world are mysteriously summoned to Nashville, the Music City, to join together with Victor to do battle against the "Phasers", whose blinking "music-cancelling" headphones silence and destroy all musical sound. Only by coming together, connecting, and making the joyful sounds of immediate, "live" music can the world be restored to the power and spirit of music.

Read by the author, with:

What listeners say about The Spirit of Music

What if music told you she was dying?

At the end of his previous book, "The Music Lesson", music told Victor that she was sick and dying. Now, victor and a group of fellow musicians are called to save music, to fight for her life against forces that want music dead. It is a heroic battle in which love may do as much, if not more to save music than music itself!

A rich exploration of our relationship to music

Victor Wooten has woven another rich tale about Music and what our relationship should be to Her. Every musician, every aspiring musician, and anyone who loves music should dive into The Spirit of Music, the sequel to Victor's celebrated first book, The Music Lesson.

This book describes the efforts of a group of friends who embark on a journey to save Music, who is dying, and the book asks us to join in the battle. The tale is full of humor on the one hand, and valuable lessons on the other, while wrapping it all up in a story that will please your ears, aided by snippets of music from Victor and other musicians throughout the book. And for those of you who have read the print version of The Spirit of Music, let me assure you that the audio version adds so much more richness to the story.

Those of you who have been to Vic's camps will likely find characters you know and hear references to incredible information you have been given, and I promise that the book will bring smiles to the faces of campers. I give this book five giraffes!

As the title suggests, this books tells a story that delves into the spiritual side of music. Through the story that helps the reader find a path to their own conclusions.
Most importantly for me it was enjoyable to listen to. The voices of music legends like Chuck Rainey, Keb Mo, and Victor Wooten (the author) made it even more fun!