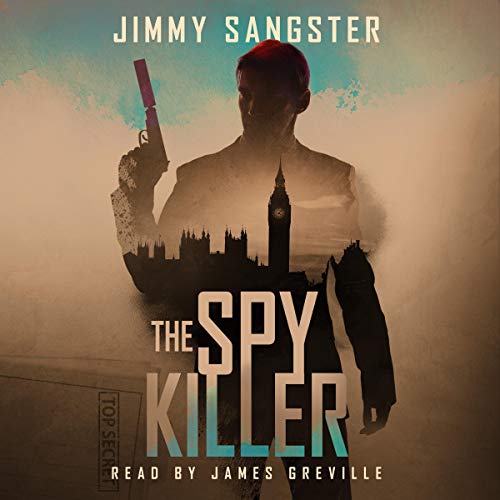 Written by: Jimmy Sangster
Narrated by: James Greville
Try for $0.00

Ex-British spy John Smith is nearly broke, has bad teeth, is lousy in bed, and drinks too much. But he's no fool. He's a man who knows his own limitations and works within them.

He blackmailed his way out of the secret service years ago and is barely making a living as a London private eye when his ex-wife comes calling and asks him to follow her philandering husband. But that sleazy, all-too-common job leads to some uncommon trouble...and Smith is thrown like a chunk of raw meat into a lion's den of international espionage, betrayal, and killing. His only hope of surviving is to outwit his clever and brutal adversaries at their own deadly game.

"Very astutely plotted, with many surprising twists and a sharp bite," (The New York Times)

"There's nothing ordinary about this adventure. It's big league intrigue." (Kirkus Reviews)

"A witty spy story in the anti-James Bond tradition." (The Cedar Falls Courier)

This novel was original published under the title Private I and was adapted into a feature film starring Robert Horton, Jill St. John, and Sebastian Cabot.

What listeners say about The Spy Killer

I received this book for free. I am voluntarily posting this review and any opinions expressed herein are my own.

This is a fun private investigator/spy novel. Our hero is a pudgy middle-aged man, who is not great in the bedroom; worries about gaining more weight but has trouble denying himself sweets; is clumsy; and makes humorous observations about himself and others. While our hero is clearly not in the class of the James Bond ultra-alluring, tuxedo-clad, suave spies, he does have a skill set which allows him to keenly observe and manipulate.

The story is set in the 60's but is still interesting and fun. It has a good amount of suspense and humor. I was drawn in from the beginning and entertained throughout.

The narrator, James Greville, had the perfect British accented narration, with a lackadaisical feel to it, which fit the main character. His dry delivery at some of observations made me laugh out loud.

The Spy Killer is about an English former spy, now private eye, who while in the midst of a case suddenly finds himself embroiled with his former vocation as well as past participants.

This novel is one of those that kept me engaged from the get go. Not just from the plot and characters but through the narrative by the protagonist. Frankly I listened on audible more than straight reading the book, as the narrator, James Graveville, was gave perfect voice to the main character. He was so adept at the intricacies brought forth by the author I laughed out loud at appropriate times.

I received this audiobook free at my request and am leaving this review voluntarily.

The Spy Killer is a gritty easy to follow spy yarn with a bit of a noir feel to it. I guess you could say that the MC is a kind of antihero, in that he's a somewhat flawed human being, but you're still rooting for him as the story draws to a close. The story itself is pretty easy to follow, but fans of 60s era spy novels should really enjoy this. I found the narration by James Greville to be quite good overall, and added to the enjoyment factor of the novel.

If you like spycraft from the sixties, you might like this book. I would have liked the MC to have more of a hero's journey, in the sense of character development, taking responsibility for his life and getting cleaned up, and some such. I kept waiting for him to crawl out of his shabby, downtrodden cocoon as a newly re-awakened top spy, but that was not the story arc the author designed.

I kept wondering why the characters were on the two-dimensional (and therefore predictable) side, and why the money that's involved as a plot point was such a relatively low amount, until I discovered, days after finishing the book, that this was actually written in 1969. Now that I know the era of origin, it makes sense that the story distinctly lacks the modern day grit, timing and action I personally like best.

So, in summary, it's a slightly depressing kind of spycraft story with not a lot of action but with some puzzles to solve. The main character definitely has interesting skills but you may not want to identify with him in spite of that, because he's not really sympathetic at all. Come to think of it, this may in fact be a literary novel (which is not my genre of choice).

~ I was given this free review copy audiobook at my request and have voluntarily left this review.

I received this from the publisher, Brash Books, and Audiobook Boom in exchange for an honest review.

This was pretty good, and not quite what I was expecting. It was suspenseful and had several twists and turns that weren't really surprises, but entertaining nonetheless. At times, it reminded me of Journey Into Fear by Eric Ambler.

The ending was very shocking, and threw me for a bit. Not bad, just sort of a jolting end like coming to the end of a fast roller-coaster ride.

I'll definitely be looking for the next book!

Good story inspires me to buy the book

I like the story because I could follow the twists of a believable spy novel. The protagonist isn't perfect (definitely not James Bond) though
he was professionally trained, and supposedly very good, once upon a time. I am not going to provide any "spoilers" ...

I will say the narration of a book, especially of this ilk, is vital to my listening pleasure and it distresses me to write a less- than glowing review when the publisher provided me with a free review copy, but, "honest" review: I believe a different performance would greatly improve this audio book. I didn't get to "live" the story because of a relatively flat narrative style. When I listened to the sample I liked the voice and recording quality but the voice lacked emotion or was misplaced somehow. So, I am going to buy the book so that I can appreciate the story.

Everything about this book pulled me in from the start. John Smith is no James Bond - he's just a regular investigator trying to get by. When's he's pulled back into the world of international intrigue and betrayal, he has to use his smarts to figure a way out. I finished in one session.

James Greville did an excellent job narrating this story. His voice is pleasant and easy to listen to, narration well paced and his vocal performance helped bring John Smith to live.

Readers who enjoy gritty, non-traditional hero thrillers will rate this a 5-star story.

Review copy provided. This review voluntary posted. All opinions my own.

Cold War intrigue in the tradition of le Carré.

I started this novel without researching it first. By the end of the first chapter, the story had a Cold War era feel.
I am currently reading Kerr’s Bernie Gunther series and this had a similar feel. The spycraft and tech are dead on and well they should be since the original was written in 1967, over 50 years ago.
The pacing, tone and plot twists manage to keep the modern reader’s attention quite well.
Character development, plotting, setting and action; this short novel has it all and well accomplished.
The narrator, James Greville, initially comes off low key. Considering the story is told from the point of view of a heavily drugged patient, the low key narration fits. Greville does display more animation in the action oriented parts of the story, but all in all he seems well suited to the telling of the tale of a British ex-spy pulled back into “the life”.
I can recommend this to anyone who enjoys a mystery or spy novel from la Carre.