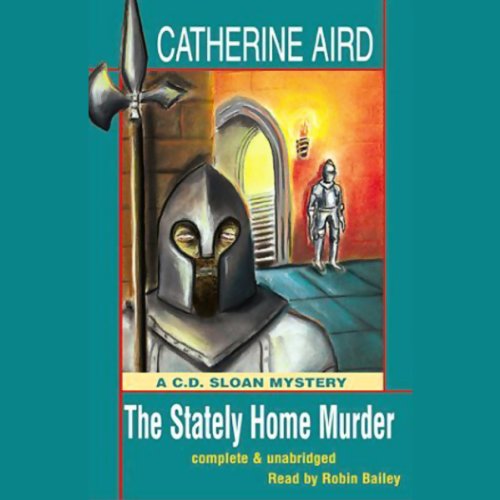 Written by: Catherine Aird
Narrated by: Robin Bailey
Try for $0.00

There's been a murder at the Manor!

At this stately home, now open for public tours, visitors revel in the lush atmosphere created by its three hundred rooms, its exceptional display of fine china, its chilling dungeon with historic suits of armor on display, evoking the spirits of knights from a forgotten age. Young Michael's sister, a visitor to the mansion with their mum, presses her for an explanation of "what's a chastity belt?" while Michael fools around with one of the suits of armor. He lifts the visor and stares inside, only to find a face staring back at him! A dead human body has been stashed inside the armor after having been done in by a savage blow to the back of the head. Detective Inspector C.D. Sloan and his wisecracking sidekick Crosby are called in to figure out whodunit and why.

Mystery fans will relish this delightful entry in Catherine Aird's highly esteemed classic series starring Sloan, of the Berebury Criminal Investigations Dept. in Calleshire, England, and his amiable but not very able assistant, Crosby. The two are introduced in The Religious Body, the first of 18 C.D. Sloan mysteries. Aird's work is among the very best of the British police procedural genre, particularly noteworthy for the delightful sense of humor woven throughout.

The Stately Home Murder was originally published as The Complete Steel.

What listeners say about The Stately Home Murder

If your 'bag' is English mystery, you don't have to look any further to find its pinnacle and if you enjoy sly humor; this book is the answer to your prayers. I'm not going to add much to the well-done summary except to say that the narrator absolutely makes this book.

Having suffered through narrators that read in a dismal monotone, or mispronounce key worlds throughout ('Galileo' is pronounced Gali LAY-O; NOT Gali LEE-O), I can say without reservation that this man is an absolute delight. His British accents are flawless, everyone sounds different and he reads asides and parenthetical comments as they should be read.

Listen to this book! Trust me, you won't regret it!

What did you love best about The Stately Home Murder?

There's an old cliche about actor's voices - that those with the best voices could read names from the phone book and still hold listeners entranced. For me, that's the case wth the reader of this book, Robin Bailey. His command of voices, his inflexions, his emotions, are all masterful.

Catherine Aird's plots don't really keep people on the edge of their seat. It's not a suspense book, it's a "cozy" mystery. The plot was intriguing and I loved the description of the "stately home" and the "armor." (Note that The Cold Steel is actually the same book with a different title, by the way.)

The book is leisurely paced, with Detective Sloan's thoughts carrying on in a strea-of-consciousness way, as with all Aird's books. They may be turned "slow" but I think they're fun.

Have you listened to any of Robin Bailey’s other performances before? How does this one compare?

I first saw Robin Bailey in Mystery's Charters and Caldicott 20 years ago. Over the past five or six years I've made a special point of collecting all of his audio performances. (Except Ruth Rendell. Even for the sake of hearing Bailey's voice, I don't care for Ruth Rendell). My favorite of the books he narrates is actually The Murder of Roger Ackroyd.

If you're not sure what a fiction book on tape should sound like (as far as the narrator is concerned) - get any of Robin Bailey's narrations. (Yes, probably even the Ruth Rendell books). They'll set the standard for you.

As for Catherine Aird, I suppose I like the books as much as I do more because of Bailey's performance of them. in print, they are definitely "light" reading. The mysteries dont' seem to be fair play to me. But they are fun.

The most wonderfully narrated book of all time.

Catherine Aird has written a stellar police procedural with a delightful cast of characters and a perfectly depicted Stately Home tour setting. This alone would make the book excellent. But it is also narrated by Robin Bailey, who does every character, every sentence to perfection. His one man play type reading of all the eccentric and expected characters is not to be missed. This was the first audio book I ever bought, and I listen to it time and time again, never tiring of the flow, the humor, the sheer Britishness of the whole book. I simply can't recommend this book highly enough. It's fun every single time I hear it. I wish I could give the performance a million stars, it deserves every one.

This old book is a lot better than I thought it would be. Murder at the
Castle. What could be sillier? It turned into an excellent who done it.
Follow the story, listen carefully, relax and enjoy the quick, quiet humor.

I could not finish listening to this book because the narrator’s style is unbelievably irritating. It’s a shame, because I’ve enjoyed other Catherine Aird books that have had a decent narrator (Derek Perkins).

Fun. Easy. Worth it.

This short novel, narrated beautifully by Robin Bailey, was fun and a bit baffling to me. Although I spotted the major clue, I couldn’t figure out its significance. Inspector Sloan, however, could, leading to the unmasking of a most surprising culprit.

loved it. narration was flawless. plot was interesting. clever characterization. good deal. no skin or excessive gory details. spot on.

Loved The narration by Robin Bailey! This is the first book by Catherine Aird I've listened to, I found it quite enjoyable ! Also loved the quirky British humor, Mr. Bailey expressed that so well, made me chuckle! Will look for more books in this series!

it was a good short read. I enjoyed the book. it's great for a quick read