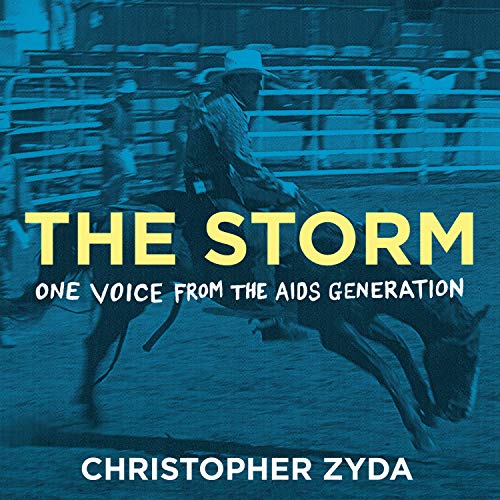 Written by: Christopher Zyda
Narrated by: Paul Boehmer
Try for $0.00

It all begins in early 1984, when Chris, a 21-year-old UCLA English literature major, risks ostracism when he comes out of the closet to his fraternity brothers just as the AIDS pandemic is beginning to explode in gay communities across the United States. Soon afterward, Chris meets and falls in love with Stephen, a graduate of Yale University and Law School, and the two of them build a life together as their friends start to fall sick and die from the spreading storm of AIDS.

Stephen begins showing symptoms of AIDS in early 1986, and Chris faces a difficult choice as he is certain that he, too, eventually will be stricken by the disease. He abandons his writing career and attends the UCLA business school so that he can earn enough money to pay for healthcare during Stephen's illness.

The Storm is filled with heart, optimism, and love, interspersed with Los Angeles history, gay and lesbian history, AIDS history, and the backdrop of the 1980s and 1990s. It is an unflinching and, at times, raw memoir of perseverance, integrity, forgiveness, the power of love, spiritual growth, Carpe Diem, dreams, and, most of all, survival and ultimate triumph.

What listeners say about The Storm

Zyda is Brilliant (Just ask him.)

I am the same age as the author and spent the 80s/90s in Dallas during the AIDS epidemic. I thought this was going to be a warm, loving memoir that I could relate to. I was mistaken. Perhaps, I should have read the book instead of listening to it. The narrator is genuinely terrible. He projects a smug, snobbish and superior tone throughout the book. (I swear, his voice reminds me of Hermy the elf from Rudolph the Red Nose Reindeer. Condescending.) There are also a lot of analogies and metaphors in this book and they are well worn. I felt I was beaten over the head with “what was red was black and what was black was red” until I wanted to stop listening completely.

It is hard to connect to this story as the author continuously points out how successful he has been at, well, everything he touches. The amount of bragging he does about his successes - and references to multiple homes, celebrity neighbors, career, salary, etc., keeps the listener from really caring. Later in the book he definitely comes across as an elitist one percenter. He also comes across as kind of petty. Who makes their parents sign a behavioral agreement after they just reconciled? There is a long section about a lawsuit with Stephen’s parents. The author was aghast that Stephen’s parents ignored his wishes but would Stephen really have wanted Chris to sue his parents or would he have said, “Chris, just leave it.”? The only outcome of that lawsuit was a sense of smug satisfaction. It did nothing to further the AIDS fight, gay rights or anyone’s honor.

My gay friends in the 80s didn’t have lawyers or high-powered careerists for boyfriends, nor were we blessed with good insurance or parents who paid for college. There were no visiting nurses or hospice staff to take care of our ill; we did it ourselves and then spent whatever free time we had volunteering at the AIDS Resource Center and Food Pantry to help others. I thought this would be a similar story that would bring back some difficult, yes, but also wonderful memories. It did not.