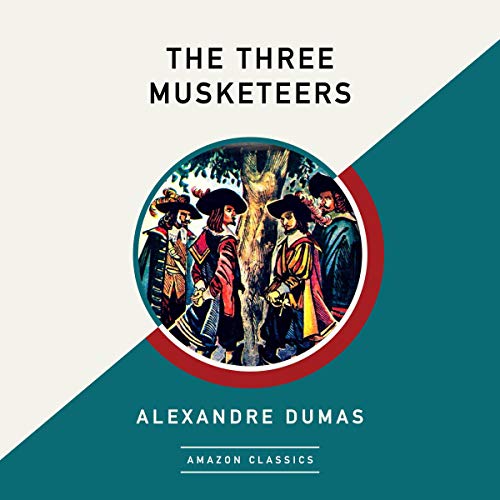 Written by: Alexandre Dumas
Narrated by: Guy Mott
Try for $0.00

Young nobleman d’Artagnan has arrived in Paris intent on joining the guardians of King Louis XIII. He befriends the regiment’s most formidable musketeers, Athos, Porthos, and Aramis, and together they unite in their commitment to uphold justice. Soon, a royal indiscretion thrusts them into an audacious escapade of courtly intrigue, thwarted romance, and daring rescue. But it’s the Machiavellian schemes of a powerful enemy and the wicked seductions of an ingenious female spy that will be their greatest challenges.

Alexandre Dumas’s thrilling epic stands as one of the most entertaining historical adventures ever written and has made immortal the all-for-one heroism of these comrades in arms.

What listeners say about The Three Musketeers (AmazonClassics Edition)

terrible narrator. every comma is a 3 second pause

can't listen anymore. how do I get my credit back?? money back please please

good story worth a read if you like sword fighting

the story was fun and the characters are good, I enjoyed it, although alot of the names of places in france sound very little like actual words to me as I speak no French. the end definitely leaves something to be desired for it seemed to be heavily focused on the imprisonment of Lady de winter and then sort of petered out about the main characters. the cheeky fun of this story is quite good and the silliness of almost everyone makes it a classic good read...or listen. narration was good and the pacing was decent. worth checking out if you have seen any of the many film adaptations or are interested in swashbuckling and sword play.

Quite good. The work is excellent. The narration is exceptional aside from the french pronunciation, which is still good.

Alexandre Dumas is one of the greatest novelists of all time, and "The Three Musketeers" is one of the finest adventure novels. Alongside "The Count of Monte Cristo," Dumas established with this book his reputation as a master storyteller. This novel is essential reading for a comprehensive understanding of French literature, and literature more broadly. This audiobook is quite good, with clear narration and distinct voices for each of the characters. I enjoyed reading the text alongside the audio, and recommend other readers do the same.

Comments from a reader

This was a good read. I expected more from it as it is a much popular classic, but it is worth reading for fun.

Guy Mott was a wonderful narrator, one of the best or maybe the best I’ve heard (and I’ve heard a lot o audiobooks the last couple of years)! Really, not only his voice, but his pronunciation is a dream to someone whom first language is not english, very clear, his voices are perfect, made a great story even better!

The original story is excellent and some of the stories told here are missing in the movies. Very funny manipulative character known as MiLady reminded me of some women I have met. Laughed out loud, 23 hours in..