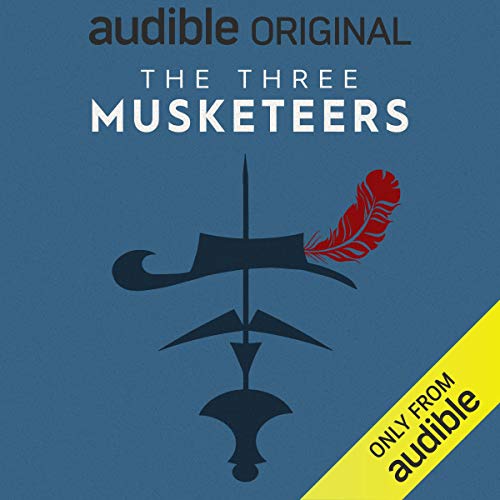 Swashbuckling classic adventure, with an updated twist placing Milady in the role of narrator.

Young D'Artagnan arrives in Paris to join the King's elite guards but almost immediately finds he is duelling with some of the very men he has come to swear allegiance to - Porthos, Athos and Aramis, inseparable friends: the Three Musketeers.

Soon part of their close band, D'Artagnan's loyalty to his new allies puts him in the deadly path of Cardinal Richlieu's machinations. And when the young hero falls in love with the beautiful but inaccessible Constance, he finds himself in a world of murder, conspiracy and lies, with only the Musketeers to depend on.

Everyone needs a bit of adventure sometimes. A trip out into the woods, a vacation to an exotic destination or even a new project at work can be the spice that keeps life interesting. Find out how to escape the daily grind with our favourite action & adventure titles on our blog, Audible Explore.

What listeners say about The Three Musketeers

Some moments made me laught out loud. Not just an swift exhalation through the nose, no. Quite literally burst out laughing. The moments with Plancher and D'Artagnan are especially memorable.

Powerhouse performance from the cast helped by the wonderful background score and sound effects.

This was literally a ton of fun, although there is a character that doesn't make it out which is kind of a bummer. very well performed, the small audio queues to show the scenery really add to the performance.

a dreadfully long book but the actors where great.

the actors where great but the story was a nope for me.
as everything is in dartanion head his but a female narrating everything as if he was insane was so bizarre. and an over use of description become very annoying at most part. I finished it to get it a full chance but I did not like it.

Classic story preformed by great performers. I've never listened to an audio production like this but I thoroughly enjoyed this one

I’ve read the book in original many years ago and seen various movies and tv shows, since then, etc. Some versions changed the fate of some characters and I liked very much the ones where a certain fierce female character - will not name her - gets to live.

I didn't expect it to be this good!! It is wonderful!! The drama, the characters make this so much fun to listen to. I hope they do the next book in the series "Twenty Years After".

Individual voices brings out each character. Very easy on the ears to follow the story

It doesn’t mirror the original book perfectly but the voice acting was phenomenal and made for an extremely enjoyable listen. Truthfully, Dumas’ stories are full of plot elements that appeal to a variety of genres making them appealing to everyone once you get past the identification of his novels as “Classics”.

As I have never read the original novel, I thought when I chose this “book“ that it would be just that – the novel itself by Dumas. Instead, it was very much like a classic 1930s radio show, with very well trained voice actors playing all the characters. Overall, it was very well done, thoroughly entertaining, and held my attention all the while. Sometimes the voices were a bit similar to each other but one could follow the storyline quite well. I would recommend this presentation for anyone who likes entertainment in the noir style.

If you like heavy breathing and damsels who apparently will screw everyone in grasps’ reach - you will enjoy- frankly Hustler with pictures could do much better.

This book is performed like theater. It took a while to get used to the production but after that it was excellent.

I hate it has take me so long to read this classic. A book that is action packed full of action, adventure, bravery, treachery, romance and villains (although at times it is hard to know exactly who the villains really are). The three musketeers are tracking down a nemesis, a strong woman villain who is tracking them as well. I couldn’t put this book down!

Always a favorite book of mine this production had amazing voices and sound effects. Can’t wait to listen to a similar production.

Wonderful classic, well-respected in its adaptation and performed with panache. I completely enjoyed this production.

The abbreviated storyline is there but it’s like any book that has been turned into a movie - it’s got added sex and drama to appeal to the masses. There is so much added sex in this dramatization that I was rolling my eyes at how ludicrous it was. The actual book has no blatant sex. You have to read between the lines and look hard to find it. The actors did a great job. I have no complaint on that part. I would suggest listening to the actual book though if you want the actual story.

Best thing I heard on audible so far. This was really good stuff. Can’t believe it was free.