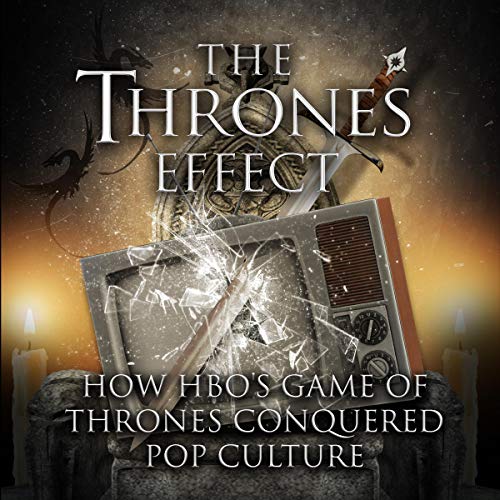 In the past decade, there has never been such a pop culture titan as Game of Thrones. We all now live in the seven Kingdoms of Westeros, yearn for the Iron Throne, believe in dragons and know the magic word that makes them breathe fire. What is it in the HBO show, spawned by George R. R. Martin's A Song of Ice and Fire series of fantasy novels, that has propelled it into the cultural Hall of Fame and made it such a global phenomenon, with loyal fans from all nationalities, cultures, ages, genders, and even tastes? Game of Thrones has made fantasy, once relegated into a subgenre, mainstream and cool, and its characters, scenes, themes, and quotes have permeated into our 21st culture.

Whether winter is coming or going, we live and breathe Game of Thrones 365 days a year. We are YouTube content creators, podcasters, writers, novelists, designers, teachers, professors, techies, and therapists, and we have collaborated on this book after dedicating much of the past decade to better understanding and appreciating Game of Thrones. We are the swords in the darkness and the watchers on the walls. We’ve built community followings of nearly one million people from all over the world to discuss and expand on this pop-culture phenomenon, and this is our ultimate and complete analysis of this incredible story.

What listeners say about The Thrones Effect

My favourite you tubers!

Very interesting book, one I’m glad the combined authors put out in audio. I really enjoyed their take on how Game of Thrones wove it’s way into our everyday language, behaviours and created this fandom. I am disappointed with seasons seven and eight, but not by the content they folks put out. Keep continuing the conversation everyone, your collective channels keep me happy on a daily basis.

Thoroughly enjoyed listening to some of my favorite GOT voices. Channels from youtube that I've come to rely on for my GOT reviews and updates; voices that MADE the show that much more alluring and fun. Chapter 10, Grayarea is my girl! Grey was my voice of reason, and I couldn't wait to watch her reaction videos with every episode. She now is reviewing book chapters from GRRM's first book. Jema from Secrets of the Citadel is so knowledgeable, and I enjoy all of her work. Chris from Smokescreen reminders me of my best friends, and I wish I could buy him a brew! He would livestream after every episode, and I LOVED watching the day after. He was so enjoyable to watch. Protostark! Sunday is coming man! GOT academy is a great channel, and I wish I would have found out about this channel before season 8 of the show.

I've NEVER liked sci-fi or fantasy but GOT changed the game. There is no show that came take it's place. This book helped me through my GOT depression.

Great read. Well worth the purchase, y'all!!

I just purchased the book and quickly noticed several glaring errors. Firstly the chapters are missnumbered from the very beginning. There are at 3 chapter 6! The first two (chapters 2 & 3) chapters give the Title of the chapter and the name of narrator, but later chapters omit this. I don't know how these glaring omissions happened. I love the YouTube channels that made this book and I'm very upset their work is treated so unprofessionally. I would love to give it five stars but right now, unless changes are made I can't

I'm a big game of thrones fan but didn't find this book interesting. I've tried several times to get through it but turn it off after 15-30 minutes everytime. I respect what the multiple authors have done but it's just not a collection of stories that catches my ear.

Over Priced for an Amateurly Recorded Audio Book

The sound quality and performances by many of the voice actors is severely lacking. I skipped one chapter as the quality and stiff, fake delivery was so grating. Additionally, the essays in each chapter weren't that interesting or informative. I do not recommend this as either a physical book or audio book. It would be better kept as a blog post.

Struggled to get through the robot read chapter, would have given 5 stars. Good book otherwise...

love Game of Thrones and thoroughly enjoyed these narratives. can't wait to heat their take on the final season.

FAR BEYOND MY EXPECTATIONS!!

I was interested in this audiobook because as a hardcore ASOIAF fan, I listen to some of these video bloggers on the regular: Chris from SmokeScreen, Gemma from Secrets of the Citadel and GrayArea offer a familiar and often thought-provoking perspective. But can I just say...Gil Kidron BLEW. MY. MIND. At first, I wasn't sure if I could handle his Oberyn Schwarzenegger-esque accent for an extended time, but it quickly grew on me. His insight, analogies, and comparisons from the past to present, fiction to real-life history and current events...coupled with the psychoanalysis of the characters was just exceptional. He delivered his essay like that school professor you wished you had. I enjoy GOT beyond the entertainment level with its complex characters, storylines which challenge you to see beyond the obvious. This story is much deeper than complex than most realize on so many levels. And I think he nailed it when he said we are captivated by it because we haven't had the experience or history of monarchies, fights for power etc. How do i know this is true? After GOT, I dove into everything British history. EVERYTHING. I had zero interest in this topic before GOT. The insight as to what may have and how GRRM's craft was inspired is truly a look behind the most amazing curtain of writing and storytelling. My only complaint is that I wish it were longer. Bravo to everyone!!

This book is everything!

Some of the best minds and voices in the fandom wrote and narrated this masterpiece!

Great, worth a read for those super serious fans

This was a really good book and I would recomend for those super fans of GOT out there. I was so suprised to hear Gemma from Secrets of the Citadel, Lady Gray from Gray Area, and Chris from Smokescreen. if you are a fans of their youtube channels, this is the book for you. FYI, this is a great book even if you didn't like the ending of season 8. worth a read.

Most of this is great

There are a number of narrators with heavy accents who are almost impossible to understand. After struggling to understand them I ultimately skipped those chapters, which is a shame because they were probably full of interesting information but if I can’t make out what you’re saying I will never know (this doesn’t include Gemma or Because Geek). The voices I could understand were great. I subscribe to or occasionally watch videos from most of those authors. Overall, it’s slightly disjointed which is expected when a book has so many diverse authors, but it’s quite good, relatable and interesting. The conversational YouTube video tone makes it an easy listen with the exception of the chapters discussed above (which is why I had to give a three for performance, the voices I could understand deserve a 5). Overall, it was worth the credit to hear and I will probably listen to the coherent parts again.