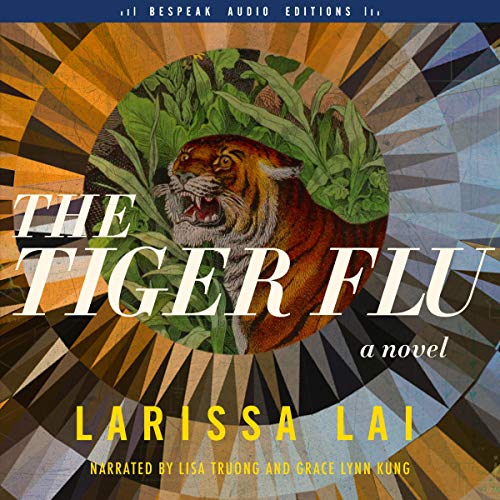 Winner of the Lambda Literary Award

Nominated for The Otherwise Award and The Sunburst Award

"Blending the surreal and the entirely possible, The Tiger Flu is majestically compelling. A must-read." (Eden Robinson, author of Son of a Trickster)

In this visionary novel by Larissa Lai - her first in 16 years - a community of parthenogenic women, sent into exile by patriarchal and corporate Salt Water City, go to war against disease, technology, and an economic system that threatens them with extinction.

Kirilow is a doctor apprentice whose lover, Peristrophe, is a "starfish", a woman who can regenerate her own limbs and organs, which she uses to help her clone sisters whose organs are failing. When a denizen from Salt Water City suffering from a mysterious flu comes into their midst, Peristrophe becomes infected and dies, prompting Kirilow to travel to the city, where the flu is now a pandemic, to find a new starfish who will help save her sisters. There, Kirilow meets Kora, a girl-woman desperate to save her family from the epidemic. Kora has everything Kirilow is looking for, except the will to abandon her own family. But before Kirilow can convince her, both are kidnapped by a mysterious group of men to serve as test subjects for a new technology that can cure the mind of the body.

Bold, beautiful, and wildly imaginative, The Tiger Flu is at once a saga of two women heroes, a cyberpunk thriller, and a convention-breaking cautionary tale - a striking metaphor for our complicated times.

Bespeak Audio Editions brings Canadian voices to the world with audiobook editions of some of the country's greatest works of literature, performed by Canadian actors.

"A compelling cyberpunk thriller.... Lai draws inspiration from the feminist science fiction of Marge Piercy and Joanna Russ, exploring questions of reproduction, lesbian separatism, and biopolitics in the often absurdist and even surrealist world of Saltwater City." (Booklist)

"Lush and detailed.... The novel's genre itself revels in the technology of hybridity. The Tiger Flu is unnerving and epic in its scope as Lai entwines an intersectional eco-feminist critique with exhilarating action." (Room)

"This is an ambitious work and Lai is wonderfully successful in her effort to mash up cinematic science fiction, magical realism elements and fascinating characters with a fierce concern for gender and racial justice to produce an impressive text." (Vancouver Sun)

What listeners say about The Tiger Flu

This novel is a rollercoaster ride in the best possible way. Part cautionary eco-feminist and cyberpunk tale about the dangers of ecological collapse, it is also about what happens when consumerism and technology meld together to create a new religious framework for this, ahem, brave new world. Though Lai's predictions for a possible future we may be marching towards are bleak, its also a story ultimately about love and hope.

Wonderful world building, as usual with Lai. Biopunk post-cyberpunk that shows a hierarchy of engineered beings that allows the privileged to co-opt parts that fail of theirs by doubles, but outside of that basic framework more types of beings exist. When a seek to break their oppression things begin to unravel.

The marketing copy is actually far more apt at describing what happens than I ever could be. It’s immersive and incredible. The narrator was perfect. Lai has a gift for using accessible words in creating a foreign ecosystem of references that initiative but indicative of the futuristic, wild setting. Absolutely loved it and recommend.

A swirling fever dream of a story. I struggled to understand what was happening in the later parts, then gave in and just went with it.
After oil Vancouver and suburbs was fascinating, I wished for a map, but as with the rest of this book, you just have to go on instinct. At times visceral to the point of nausea, it was also somehow hauntingly soulful and lovely. Not for everyone, but for those able to ride the tiger, it's a wild one!

Its a good book but there are times it can be a little confusing. Worth reading though.