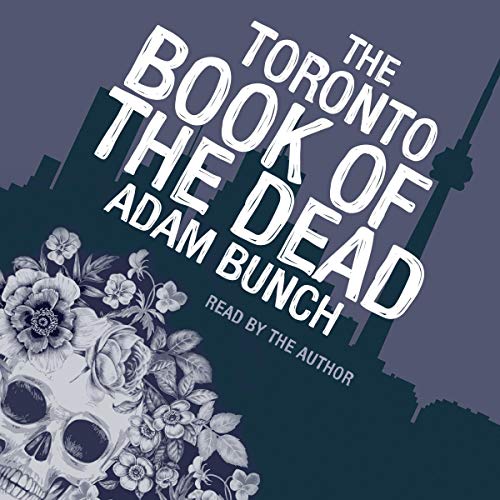 The Toronto Book of the Dead

Exploring Toronto’s history through the stories of its most fascinating and shadowy deaths.

If these streets could talk....

With morbid tales of war and plague, duels and executions, suicides and séances, Toronto’s past is filled with stories whose endings were anything but peaceful. The Toronto Book of the Dead delves into these: from ancient First Nations burial mounds to the grisly murder of Toronto’s first lighthouse keeper; from the rise and fall of the city’s greatest Victorian baseball star to the final days of the world’s most notorious anarchist.

Toronto has witnessed countless lives lived and lost as it grew from a muddy little frontier town into a booming metropolis of concrete and glass. The Toronto Book of the Dead tells the tale of the ever-changing city through the lives and deaths of those who made it their final resting place.

“Adam Bunch has hit upon the clever idea of recounting the stories of dead men and women who once lived in Toronto to bring the history of our patch to vivid life.” (Toronto Star)

“Adam Bunch has compiled one of the most fascinating Toronto historical books ever - I never knew how much I wanted to know how local residents have met their demise. Let’s update the city’s motto to 'Dying Morbidly Our Strength'.” (Matthew Blackett, Publisher of Spacing magazine)

“Sometimes gross, always engrossing, Bunch weaves well-known Toronto histories with those that should - and thanks to Bunch’s efforts - will be better known. With compelling storytelling and evocative geographies, The Toronto Book of the Dead brings Toronto’s history uncannily to life.” (Daniel Rotsztain, author of All the Libraries Toronto)

What listeners say about The Toronto Book of the Dead

Book of the Dead is the history of the living

Don’t be fooled by the title. This isn’t a typical true crime story, or even a ghost story (though there are a couple of those in the book). This is a deep dive into the people who made Toronto what it is today, and they just happen to all be dead. I’ve lived in this city my whole life, but I didn’t know any of these stories. It was fascinating to hear the history of places that I pass by every day.

The best history book I have ever read or heard

As a journalist, I was always taught to "show, don't tell." Too many history books tell us what happened without offering the reader any way to picture the events as they unfolded. Military histories in particular often read like the author is simply reciting a list of dates and places, the military units involved and the number killed and wounded, then on to the next battle. Adam Bunch's account of history makes the reader/listener feel as if they were actually there to witness the events. Speaking personally as a volunteer photographer for Find A Grave and a member of several historical and genealogical societies, this is just up my alley. If I could give it six stars I would.

I found the book interesting. I grew up in the town north of Toronto, but I don’t really know much history on it. I think the author did an excellent job on the subject matter because I find Canadian history can be boring, but this wasn’t.

Looking at my old city with a whole new eye!

I loved listening to that book and learn about secret (?) pockets of history in Toronto!

I loved every minute of this book! not only did I learn some very cool history about TO, I learned some history about the neighborhood I grew up in. I had NO idea it used to be a barracks for 3000 French soldiers during the Beaver Wars. I recommend to anyone and everyone who loves history

I couldn’t get enough

I loved this book so much. I’ll definitely be listening to it again at some point. It was so engaging, the histories and tales written so aptly and the authors reading is the absolute cherry on top. Honestly one of the best history books I’ve read. It has opened up the treasure trove of Toronto’s history to this history nerd.

Must listen if you live and/or visiting Toronto!

Made up of short vignettes which just work