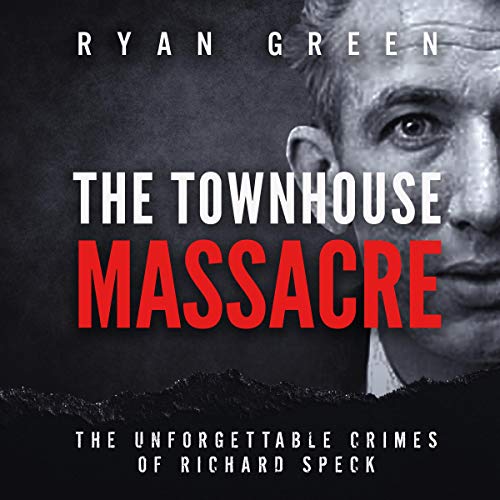 Written by: Ryan Green
Narrated by: Steve White
Try for $0.00

On the evening of July 13, 1966, an intoxicated Richard Speck broke into a townhouse at 2319 East 100th Street in Chicago to rob a group of student nurses. Speck woke the residents and ordered them into a room, calmly requesting money in exchange for their safety. The young women obliged. They believed that he was just going to take the money and leave, but Speck had other plans.

He tied them all up with strips of bed linen and led one of the girls into a separate room to “talk alone”. The situation took a turn for the worse when two more resident nurses burst into the townhouse, surprising Speck in the act. What transpired in the following hours would grip the nation with fear and forever change the perception of society.

The Townhouse Massacre is a chilling and gripping account of one of the most brutal and gruesome true crime stories in American history. Ryan Green’s riveting narrative draws the listener into the real-life horror experienced by the victims and has all the elements of a classic thriller.

Caution: This audiobook contains descriptive accounts of abuse and violence. If you are especially sensitive to this material, it might be advisable not to listen to this book.

What listeners say about The Townhouse Massacre

Wow, what makes this story so chilling is how the author uses the POV of the criminal himself. Throughout the book we're hearing Speck's own thoughts and feelings not just his actions. This tactic nearly made me feel like I was the man committing those hate fuelled crimes. Putting yourself in the mind of such evil is scary and unnerving, to say the least. Whether or not the author actually knew what Speck was thinking while he committed his crimes and aimlessly made his way through life, or if he was just liberally using artistic license doesn't matter because it worked. It felt wholly authentic and raw.
Now, undoubtedly, Speck was a woman hater, he blamed all of life's misery on women. But what I was never able to figure was: why. Why were ALL women such whores? Being that his hatred towards women was what birthed his life's vendetta to cause them such pain and punishment, it seemed to me like a more tangible cause would have been evident. I felt like I'd missed a chapter.
So while Speck sloths through life drinking and drugging, blaming all of his misfortune on the filthy whores, he ends up nowhere and wants to leave this world with one big bang. A big FU to the whores who are to blame for his inability to make something of his life, a massacre to be proud of. Finally that's when ends up at the townhouse, where he can commit his coup de grace, and show all the world what a real man is and what ALL women deserve.
Perhaps, as some reviewers stated, Speck was brain damaged but I feel like he was just a pathetic loser who always claimed to be the victim.

I was given this free review copy audio book at my request and have voluntarily left this objective review.

I have always been fascinated by Richard Speck and the gruesome murder of 8 nursing students in one drunken, debased night in the 60's. I first heard the story when I was a very young boy, too young to understand any aspect of the events. My parents were watching the news while I played on the floor, and the Speck murders had just occurred. I can actually recall watching the story wide-eyed for a few horrified moments until my Dad jumped up and switched the channel. The part of the news story I heard involved one of the young nursing students hiding under a bed, listening and watching the carnage this monster inflicted on her friends and roommates, and that image was burned into my brain and amplified a hundred-fold in my imagination. Richard Speck became my childhood boogeyman at that moment, and I spent many hours lying in bed in the semi-dark of a night-lighted bedroom worrying that Speck -- or, rather, the insanely murderous monster my imagination conjured him up to be -- would be coming for me and my family. The fact that he was eventually caught an jailed apparently didn't enter into my imaginings.

I mention all this because it obviously had a significant impact on my interest in --- and reaction to --- Ryan Green's detailed telling of the Speck story. Because of Speck's out-sized role in my childhood imaginings, I was looking forward to this book more than any new True Crime book in a long time, and my expectations were greater still because one of my favorite True Crime authors was researching and writing the story. Simply put, Green is the perfect writer to handle this kind of subject, and Speck is the perfect subject for his brand of investigative, psychologically-motivated storytelling. So my expectations were ratcheted as high as they could possibly get.

The author, as he often does, exceeded those inordinately high expectations. It's another fascinating deep-dive into the mind and soul of a despicable human being and the people whose lives he destroyed. I really enjoyed listening to the book, but I was actually a little disappointed in Richard Speck the Evil Murdering Monster. He is not Hannibal Lecter. He is in fact a very small, intellectually-stunted failure of a man, suffering from a head trauma inflicted by a despicable step-dad, pathetically self-medicating all his physical and mental pain with a deluge of alcohol and drugs. He is the most mundane kind of evil, tortured by demons he mostly birthed and fed himself. In other words, this turned out to be a very different kind of story than I expected. But by the end of the book, that initial disappointment turned out to be the most interesting aspect of the story, replacing the imaginary monster with a very real, deeply flawed human being. To an adult, that very real descent into mindless, murderous rage is more frightening than any childhood boogeyman. I was provided a copy of this audiobook in exchange for an honest review, but I would have bought this one the day it came out, both because I enjoy the author's work and because Speck loomed so large in my childhood. Whether you have a preconceived notion of Speck going in or not, "The Townhouse Murders" is a fascinating account of the making of a mass murderer that is well worth listening to.

You halfway want to feel sorry for this guy. He was severely abused as a child and had a head injury as a child, that probably contributed to his deranged way of thinking. Medical help consisted of institulizatiin for his behavior at that time. The medical community had not discovered the long-term effects of head injuries on personality and emotions. That being said, he was a monster. The torture and abuse he inflicted on women, in particular, was unthinkable. The world would have been a better place had he been locked up.

The depravity on display is sickening. Richard Speck committed the brutal rape and murder of eight women. Ryan Green captivates and has done his research well.

Richard Speck brutally murdered eight women in one night. He said "It just wasnt their night".

Ryan Green has a way of making a scary story so real and so hectic you actually feel like you were there. He describes Richard's early life, and some mental problems he had which could have led to the reasons he did what he did. He even threw in a twist at the end which really makes you think! You can almost empathise with the killer, almost... Ryan is a brilliant true crime writer and i cant wait to hear his next story!

Steve narrates very well and is a perfect fit for the story. He has excellent intonation and energy for such stories.

I highly recommend this book, and more so, any other Ryan Green true crime story. You will not be disappointed!

Note: This book was given to me for free at my request and I provided this objective review voluntarily.

Fascinating Look into a Chilling Man

Richard Speck is a very chilling figure. His descent into madness started as a general dislike against women that turned to an unholy loathing. The famous line “It just wasn’t their night” gives me chills. The thought that he could slaughter eight women in the span of a night and not feel a thing is a testament to the man’s insanity.

Narration was spot on.

What drives a man to such hatred of women?

Richard Speck felt betrayed when his mother brought a fraudster home to be his new dad. His stepfather let his mask fall off the moment the new former family moved to a new state. After enduring constant abuse at the hands of his stepfather, he came to the conclusion that his mother was a whore. His reasoning was because she married a man who promised her security for her and her children,which his stepfather reneged upon. This toxic view of his mother soon extended to his view of every woman. This would be his justification for one of the most gruesome mass murders of history.

struggled to finish did not keep me involved. the narration was boring and lacking emotion

The Townhouse Massacre: The Unforgettable Crimes of Richard Speck was a good read by Ryan Green. On July 13, 1966, Richard Speck was intoxicated and broke into a townhouse in Chicago. He went to rob nursing students and ended up waking them up and demanded they go into one room. They were willing to give him the money he wanted in exchange for their safety. He had other plans that didn’t include sparing their lives. This was a good read that followed a true crime story that gripped and scared the nation. I can’t wait to read more by Ryan Green.