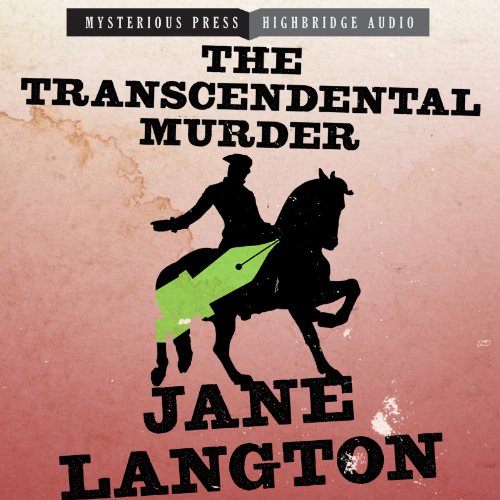 Written by: Jane Langton
Narrated by: Derek Perkins
Try for $0.00

The citizens of Concord, Massachusetts, never tire of their heritage. For decades, the intellectuals of this little hamlet have continued endless debates about Concord’s favorite sons: Emerson, Hawthorne, Thoreau, and their contemporaries. Concord’s latter-day transcendental scholars are a strange bunch, but none is more peculiar than Homer Kelly, an expert on Emerson and on homicide. An old-fashioned murder is about to put both skills to the test.

At a meeting of the town’s intellectuals, Ernest Goss produces a cache of saucy love letters written by the men and women of the transcendentalist sect. Although Homer chortles at the idea that Louisa May Alcott and Ralph Waldo Emerson might have had a fling, Goss insists the letters are real. He never gets a chance to prove it. Soon after he is found killed by a musket ball. The past may not be dead, but Goss certainly is.

"I’m not sure I’ve ever read a mystery novel that made such evocative use of its locale...informed and delightful." ( New York Times)
"The sort of old-fashioned mystery that never goes out of style." ( Denver Post)
"With a plot stemming from Concord’s obsession with its own village history, this is fun, excitingly erudite, and inventively mystifying." ( Book Week)

What listeners say about The Transcendental Murder

Narrator was
great. The story feed my hunger for transcendental poetry and murder all in one book.