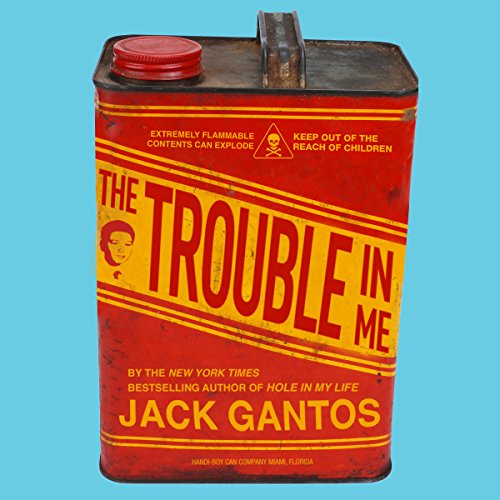 The Trouble in Me

This fiery autobiographical novel captures a pivotal week or two in the life of 14-year-old Jack Gantos, as the author reveals the moment he began to slide off track as a kid who in just a few years would find himself locked up in a federal penitentiary for the crimes portrayed in the memoir Hole in My Life.

Set in the Fort Lauderdale neighborhood of his family's latest rental home, The Trouble in Me opens with an explosive encounter in which Jack first meets his awesomely rebellious older neighbor, Gary Pagoda, just back from juvie for car theft. Instantly mesmerized, Jack decides he will do whatever it takes to be like Gary. As a follower, Jack is eager to leave his old self behind and desperate for whatever crazy, hilarious, frightening thing might happen next. But he may not be as ready as he thinks when the trouble in him comes blazing to life.

"Jack Gantos has always been an incomparable narrator of his own work. His voice is so comical, wry, and enthusiastic that he demands the listener's attention even when the plot is headed toward crazy in a hurry." ( AudioFile)

What listeners say about The Trouble in Me

Enjoyed the book. The students that needed this ignored it. The students that didn't were awed. The way the dad treated him did invoke conversations about one of my juvie 11 yr olds. As parent i was horrified but as a teacher This confirmed that this was the everyday life of my students. Impressive that the author reads, this did catch their attention and added credibility

It was a coming of age story that really didn't spark my interest too much. I didn't really have a liking for the characters but the plot was ok.