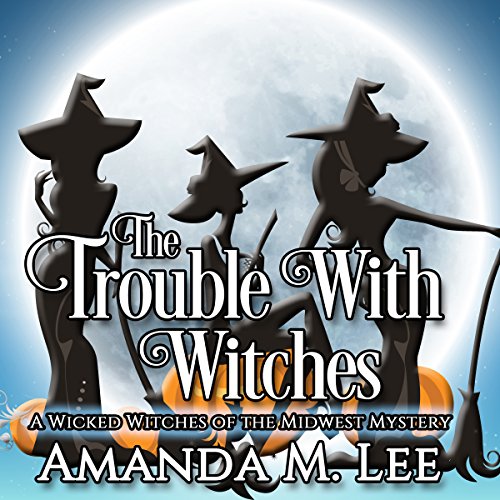 The Trouble with Witches

The Winchester witches are in a tizzy.

Sam Cornell’s parents are coming to town, and Clove is beside herself. Meeting her boyfriend’s parents is a big deal. It doesn’t help that her cousins can’t stop making fun of her, which is the Winchester way, of course.

In addition to the Cornells' imminent visit, the Winchesters are also dealing with Sam’s new tanker. An afternoon visit knocks Bay for a metaphysical loop with ugly visions of a tragedy long since forgotten - by everyone but the dead. The belligerent ghosts set their sights on someone in the Winchester household - it’s just not Bay, for a change - and everyone has to rally together if they expect to make it out alive.

If ghosts and parental visits weren’t bad enough, Hemlock Cove has a firebug. Someone is going after business owners and festival booths, and the culprit is getting more and more daring. Two forms of evil are bound to collide, but when and where?

It’s going to take all of the Winchesters - and their friends - to solve a mystery decades in the making. The answers are there, if they can dig deep enough to find them. Surviving the ordeal won’t be easy, but it’s all hands on deck - this time literally - for another wacky Winchester adventure.

What listeners say about The Trouble with Witches

I expected the narration to be an adjustment but I didn't expect it to change the characters personalities. I miss the snarky personalities of clove, bay and thistle. I don't think I will purchase any more of theses books if they are read by the new narrator.

I am finding this series hard to listen to with the narrator change. Thistle sounds like a dopey male cartoon, Clove sounds like a high 5 year old. It is just awful. I am so disappointed because I really enjoyed this series. I believe this is the last one for me.

Love the story but

Love the story but not thrilled with the new narrator. wish the previous one would come back.

Would you consider the audio edition of The Trouble with Witches to be better than the print version?

Yes I love audio editions only way to go, for busy people you can sit an read

The narrator is ok, it's unsettling when you change the narrator. not too happy about it

Painful performance - read the book instead!!!

I couldn't listen to the book and literally gave up ( I will endure just about any story line/performance - I want to give it a chance) but I had to draw the line here!! I have listened to several from this series and like them but who ever is reading/narrating this one should just STOP. Between reading through her nose ( I'm pretty sure that's her real voice ) and making the characters sound like dumb and dumber- she has no skills to do different voices or help you relate to them ( poor Thistle, she sounds like a high teen age boy) will not be purchasing again.

I was disappointed in the narrator change. really enjoyed listening to Aris. This one not so much.

This was another feel good, karma story. It would have ended better if there was a proposal to finish it off. Too bad the villain had to die. And would have been SO MUCH better with the original narrator. The change nearly ruined it for me, again. #Tagsgiving #Sweepstakes

Story is great but the narrator is only ok

Honestly, I much prefer the old narrator. This one is starting to grow on me but the voice she does for Thistle sounds like that dog from the old cartoon that wants to "hold him, love him, and call him George". It's really annoying. Thistle is supposed to be snarky not slow. I've gotten so far in the series I want to keep going but maybe download a sample if you're just tuning in.

The narrator makes it difficult to enjoy or even finish the book. She makes most of them sound very young and dumb. Well not Thissel, she makes her sound like a dude.

I like the book, but not too excited about the audio part. The person does not.sound real, in regards to the conversation.