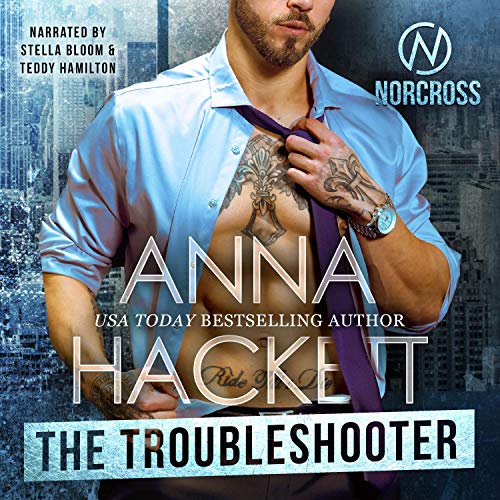 Gia Norcross’ life is exactly how she likes it. She has a successful PR firm in San Francisco, a beautiful apartment, a loving family of overprotective brothers, and her fabulous designer shoe collection. Perfection. Sure, occasionally she has to deal with her aggravating nemesis who happens to be her brother’s best friend. Saxon Buchanan: former Delta Force, tall, rich, handsome, bossy, and knows how to work her last nerve.

She’ll never, ever admit to anyone that most days, she isn’t sure if she wants to punch the arrogant, tattooed, suit-wearing know-it-all...or kiss him.

After a military career spent in a covert special ops team doing hard, dirty, and very classified missions, Saxon Buchanan is happy working at Norcross Security as the company’s top troubleshooter. He also enjoys the perks of civilian life. That includes sparring with smart, sexy Gia of the wide brown eyes, luscious curves, and sharp tongue. He’s spent half his life fighting the pull of his best friend’s little sister.

But seeing a man aim a gun at Gia changes everything.

When Gia’s troubled childhood best friend drags her into a really, really bad situation, soon bullets are flying, precious gemstones are missing, and Gia’s in danger. Saxon’s done pushing away the one woman he’s ever wanted. He’ll do everything to protect her, and he’s not letting anything get in his way: not the bad guys, not his best friend, and especially not Gia.

What listeners say about The Troubleshooter

Love the narration and love the fun characters

I love Anna Hackett books and while this one wasn't my favorite, it still was a fun ride. This is Gia and Saxon's book. Gia's best friend gets her into trouble and Saxon has his hands full trying to keep her safe. I think the biggest issue I had was Gia's almost total blind devotion to her friend, who time after time after time got her in trouble. Gia was always in trouble and while she was pretty strong and smart, her troubles ended up being a little overextended, in my opinion. I loved Saxon- alpha, protective and sweet. And it's always great to see the brothers (And I loved revisiting Team 52 for the second we see the team). So, this is an ensemble action/romance that was fun, exciting and romantic. I can't wait for the next one!

I read the ebook and then listened to the audiobook for my second reading. The team of Stella Bloom and Teddy Hamilton is amazing. I admit that TH is one of my favorite narrators but his voice is perfect for all the characters. Stella Bloom also is fantastic. I absolutely loved the narration and it elevated the story as well.

Enemies to Lovers Tropes are so fun!!

If an Author can pull off a good Enemies to Lovers trope with a well executed banter and sass between the two main characters, then you have an automatic winner of a book. I loved Saxon and Gia more than I expected. We got a tease of them in Book #1 of the Norcross Security Series, The Investigator and the tension felt between these two characters carried right into The Troubleshooter. Fun level, High! Heat level, Smokin'! Supporting cast, always a pleasure! There was a scene where Gia's actions got me scratching my head a bit, and Saxon was a bit possessive alpha-male at times, but it didn't take away from my overall enjoyment of the book, and I give it a solid 4.5 stars. I'm already looking forward to a re-listen of this book. Stella Bloom, one of my all time fav narrators, always does such a brilliant job, and Teddy Hamilton does really knows how to portray Alpha Males in this series.

Love the story and the series

Love Anna Hackett books...this series I get the ebook and listen to the audible. I love Stella Bloom. She is so talented. Does great women and men’s voices.But Teddy Hamilton made Saxon sounds nasal and Gia whiny. The first time I just quit. This time bored with COVID and a Texas ice storm I stick through it. Please Anna let Stella do all the next one!

I love this Series!

This is the second book in the Norcross Security Series, an amazing Romantic Suspense. Gia and Saxon's story is fast-paced, and actions packed. Saxon is handsome, and protective. Gia is sassy and badass. They share a strong and sizzling chemistry. This is a great brother’s best friend, and enemies-to-lovers romance. Stella Bloom and Teddy Hamilton did a fantastic job with the narration. I love their voices together. I need more of the Norcross Family!

NARRATOR REVIEW........
I wasn't really happy with the narrating of this book. Neither narrator sounded like they were enjoying the book. The male sounded sarcastic and the female narrator sounded bored.

Wow, this second story in the Norcross series was a fast paced, thrilling and steamy romance. Gia Norcross has worked hard to build a business and life she loves. When a friend from the past asks Gia for help, she doesn't hesitate to help. Soon she finds herself in danger when trouble comes knocking at her door looking for what her friend stole from them. Gia isn't afraid after being raised with her alpha brothers, and knows how to defend herself from the bad guys. Even when things get dicey, she isn't happy when her brothers, and especially Saxon Buchanan, step in to help. Saxon is her brother's sexy, arrogant best friend and her crush since she was young. Saxon is ex military, special ops and now works at Norcross Security as the company’s top troubleshooter. He has been attracted to Gia for years but stayed away in repect to her brother. But now that she is in danger, he will do whatever it tkes to protect her, and make her his. I loved Gia so much! She is a force to be recomded with and that makes Saxon want her even more. Saxon is the ultimate swoony alpha. But no matter how he tried to make Gia stay safe, he could never deny her anything. This fast paced, steamy enemies-to-lovers romance was once again brought to life flawlessly by the talented Stella Bloom, and Teddy Hamilton. Hamilton had the perfect balance of Saxon's smoldering, alpha dominance, with a swoony tender side, and Bloom showed us Gia's strength and resilience so beautifully. I loved listening to them both as they drew me in, and made this story, with all it's twists and turns, even more exciting.

Another Smash Hit! Worth the credit and more!

Wow! Another smash hit for this series! I adore these two characters and this amazing story! This is completely filled with action, humor, alpha-ness and smexy times. I LOVE this family! They are all strong of self and have a wonderful family bond. I look forward to each story!

Saxon is the troubleshooter for Norcross and has always been like family to them. He is brash, bossy and Uber protective! When Gia refuses to listen to him about her protection...he has had enough! He lays it all on the line for her. I’m not sure if there is anything sexier that a male saying “Mine” to his female.

Gia is one feisty lady! She is a female character to admire. If she can do it herself then she does and will..even though a male tells her not to. She has skills and likes to use them...and I’m not talking only shopping skills.

Overall this is another story filled to the brim with witty banter, action, suspense, and opening your eyes to what is always in front of you. I loved it and enjoy listening to this on audio. The narrators are spot on for these characters. I can’t wait for more!

I have an inkling who is next and office romances are a fav of mine!

gia & saxon had me swooning

I loved this book! Action, drama, no angst and a sexy but sweet HEA? What more could I ask for? this is book 2 and we get Gia Norcrosse's story. let me tell you, this woman is bad-ass!! She doesn't need a hero but Saxon didn't get that memo! Stella Bloom narrates the hell out of this character and Teddy is sexy and broody but also gentle and loving as Saxon.
I can't wait for more of the Norcrosse Family. we also get a glimpse of characters in the Team 52 series.

Anna Hackett continues to draw me into the Norcross Security series because it contains fast-paced scenes full of action, suspense, and steamy angst filled chemistry!! Gia and Saxon are both well-accomplished, beautiful, intelligent people with a crush on each other that they are desperate to conceal. However, when Gia’s friend draws her into her own precarious situation, the truth is revealed !!

Teddy Hamilton and Stella Bloom’s performances also enhance the listener’s experience by evoking a wide range of emotions, everything from humor to anger and all things in between!! I look forward to more of this Series!!