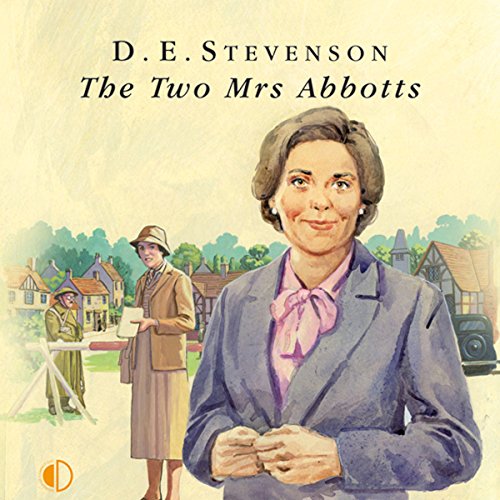 Mrs Abbott is flustered at the thought of putting up a lady from the Red Cross, but is happily surprised when she turns out to be an old friend from her previous life as Miss Buncle, infamous writer.

Of course, she’s now far too busy with her children to write, not to mention helping out in the lives of the villagers. And with a possible spy in their midst, evacuated families, potential love matches and a visit from a famous writer, she’s got her work cut out for her. Luckily for her, the other Mrs Abbott is around to help.

What listeners say about The Two Mrs Abbotts

Our family loves Miss Buncle and it is so nice to have the third volume about her life. These books remind me very much of the Miss Reed books. Quiet and gentle but enough story and character development to keep you reading page after page. My 16 year old daughter also listened very quickly to all three novels. THese are perfect summer listens, when you don't want to be stressed and just need some good entertainment.

I do concur with the other reviewers that Ms. Gallimore's voice for the 'other' Mrs. Abbott was rather annoying. It did not stop me from enjoying the book and was only a minor annoyance.

I listened a couple of months ago to all three books and have enjoyed re-listening to them with my daughter. I could see myself listening again too. Did I say I like these books?!!!

Charming, especially if you're already a fan

I would recommend this to anyone who is familiar with and likes D.E. Stevenson's low-key, gentle style. She can be really funny or ironic sometimes, but mostly she is good at creating characters that are a pleasure to know. There is occasionally a moment or two of dramatic incident, but the general format of the story is more about everyday occurrences and domestic affairs. People too often compare modern authors with Jane Austen, and I hesitate to do that here, but a person who likes Austen may very well find themselves enjoying Stevenson.

What was one of the most memorable moments of The Two Mrs Abbotts?

One of the more memorable moments was when Miss Marks, the ultra-educated housekeeper, manages to disarm a sleeping German spy. This isn't really that kind of a book--it's not an adventure or a thriller, which makes it all the more hilarious when the catching of the spy just sort of...happens! And then they go on with the rest of their day.

I grew to like the narrator's voice for Barbara Abbott, Jane Watt, and Miss Marks. However, I did NOT like her voice for the younger Mrs. Abbott, Jerry, and wasn't all that keen on some of her men's voices. It is a testimony to the excellence of the story itself that those things didn't put me off as much as they might have and I am left with memories of a truly enjoyable story.

Go back to the England of small villages and polite manners and enjoy the highly individual humor of the Miss Abbot series. I laughed out loud a number of times, chuckled frequently, and smiled all the way through this well narrated and delightfully imagined story of English village life during World War 2.

More D. E. Stevenson can be nothing but good

What a delight to have yet another book by D. E. Stevenson to listen to. I loved Miss Buncle's Book and Miss Buncle Married, so it is wonderful to get to find out what happens next to Barbara Buncle Abbott and her friends and family. With any luck we can hear the rest of this story in The Four Graces, then get more Stevenson.

What did you love best about The Two Mrs Abbotts?

It's full of interesting characters, both men and women, living in England during WWII and coping with problems caused by the war, as well as trying to lead their own lives. This story includes a family who leave London during bombing raids to live in the country, but hate country life. Their personalities clash almost comically with the customs of the

The main character is a gentle woman who works tirelessly for others and eventually has her reward when she finds love (this is the main theme of most of DE Stevenson's books).

Did Patricia Gallimore do a good job differentiating all the characters? How?

Ms Gallimore did distinguish the various characters, but her voice seemed a bit grating and harsh at times. And the main character had a very unpleasant voice, which was unfortunate since she narrates much of the book.

How I spent World War II in the English countryside.

The narrator. She read with a trilling voice which may have been modish at that time but is somewhat irritating to a more modern reader.

The picture it sketches of life in Britain during WWII. It manages to remain interesting although it only deals with the daily life in a small village and how ordinary people coped with wartime shortages and stresses.

Did Patricia Gallimore do a good job differentiating all the characters? How?

No. She would have done better not to try to use different voices but just to read the story with clear indication when one person stops speaking and the next one starts. Jerry has a very irritating voice and none of the others really comes out well.

Did The Two Mrs Abbotts inspire you to do anything?

They did not really inspire but their doings were soothing and reminiscent of a slower age.

I don’t know who Patricia Gallimore is but she is the worst narrator in audible books. This is the last of the Bunkle series, a book I read every year. The narrator is too old and her characters be they children or the elderly are just awful.
The rights have been asserted by the author. If the Stevenson family cared to make money they would have this re-recorded.

could you please add to your library of books more

Where does The Two Mrs Abbotts rank among all the audiobooks you’ve listened to so far?

What does Patricia Gallimore bring to the story that you wouldn’t experience if you just read the book?