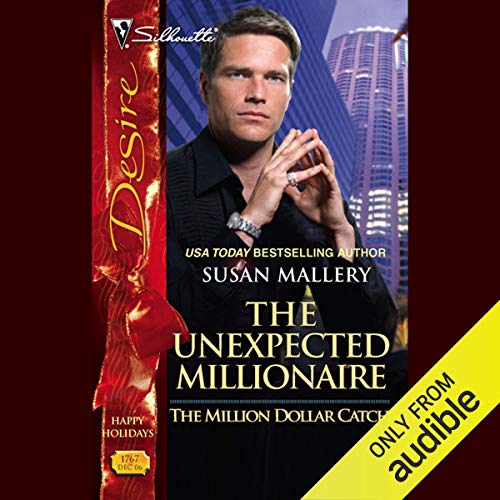 Millionaire Kane Dennison's first mistake had been carrying an injured Willow Nelson inside his home, which, as a rule, was off-limits. Of course, she'd needed his help, but his one kind gesture had her believing he was a nice man. He wasn't.

His second mistake had been surrendering to passion after warning Willow to run away. Because a woman like her deserved better than a one-night stand. She believed in soul mates. He trusted no one - needed no one. And not even Willow was going to change him!

What listeners say about The Unexpected Millionaire

This is part two of SM's "millionaire man" series and, though not quite as good as the first book, is a decent continuation of the Nelson girl's saga. I wasn't drawn to the female lead quite as much in this story as I was in the first because her quirkiness sometimes borderlines on irritating, but she was still very likable. I loved the male lead - he was strong and brooding, but when he fell in love he fell head over heals.

I recommend reading the "Substitute Millionaire" first just to set the stage and get a sense of the characters.

LOVE THE MILLIONAIRE BOOKS- ALL 3

Best of the Series

For the price this was a very cute story. I liked the characters and the simplicity of the stories. This is the second of the series.

Absolutely, the story is short but very well developed. The story is cute and interesting. This was my favorite book in this three book series.

The sweet ending and the narration.

The last one where Kane finally realizes he is in love with Willow.

Yes! I listened to it the same day...

This is a short and sweet story. Also the price is good so it is definitely worth the time and money.

I always know I'll love the story when i start laughing at the start. I did that with this one. Then cried at the end. Love stories like this.

Willow, the slightly quirky middle sister falls for a loner, who is head of security For the firm run by her future brother in law and his cousin. A cute, fast paced story that could have benefited from dual narration.

Susan Mallery is one of my favorite romance authors. This is a short and sweet, well-written romance. Great for when you are in the mood for a short, yet, engaging romance.

Ya Susan Mallery’s later books are much better. But as a true fan I still loved it. After the next one in the series I am going to really need some fools gold story

Terrific story. Willow is such a great character and unique addition to the Nelson family. In this series the men are all about what experience has taught them. It is unfortunate that their pasts have not afforded a lot of goodhearted people. It is fun to watch them as the sisters show them what love can do.

An alpha male and a ditzy female make for a very loveable storyline. The author would do better if she changed the book cover however the narrators are great