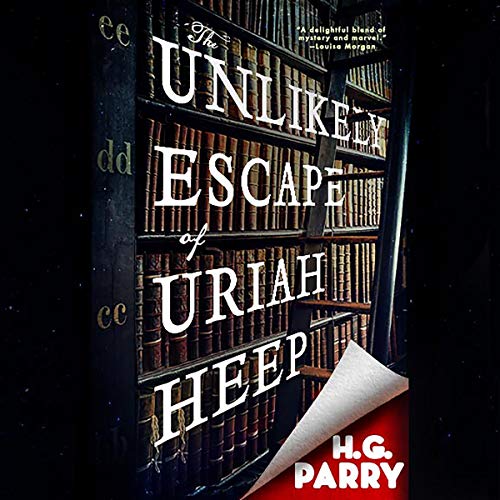 The Unlikely Escape of Uriah Heep

The ultimate book-lover's fantasy, featuring a young scholar with the power to bring literary characters into the world, for fans of The Magicians, Mr. Penumbra's 24-Hour Bookstore, and The Invisible Library.

For his entire life, Charley Sutherland has concealed a magical ability he can't quite control: He can bring characters from books into the real world. His older brother, Rob - a young lawyer with a normal house, a normal fiancee, and an utterly normal life - hopes that this strange family secret will disappear with disuse, and he will be discharged from his life's duty of protecting Charley and the real world from each other. But then, literary characters start causing trouble in their city, making threats about destroying the world...and for once, it isn't Charley's doing.

There's someone else who shares his powers. It's up to Charley and a reluctant Rob to stop them, before these characters tear apart the fabric of reality.

What listeners say about The Unlikely Escape of Uriah Heep

I have a Degree in English and teach the subject in highschool. I didn't need any of that crap to love this book. It takes classic literature where I've never read it before. Any listener will follow along (maybe miss some really good jokes) without knowing the literature it references.

The idea behind this book was so amazing, just an absolutely wonderful story on its own. I constantly felt like we were nearing the climax even when I was less than halfway through it. I had to keep listening, I just couldn’t help it! I even sped it up to 1.4x just because I was so excited to see what was going to happen. Several fun twists and turns, mind blowing reveals, and a truly heartwarming story of two brothers made it impossible to stop this audiobook. I had so much fun in this world.

And I have to mention the writing, the imagery, every word selected perfectly to fit the situation. Wonderful. The narration was excellent too. Changes in pitch, cadence, and accent were distinct enough to immediately know who was speaking in the moment.

Best listen in a while

This book was so good. I think I’m going to have to read some Dickens books.

For Fans of David Copperfield and Everyone Else

This is one of those books that when you finish you want to start ALL OVER AGAIN! I really enjoyed this one for its originality and characterizations. Sadly for me, I never even heard of Uriah Heep (stop gasping!) because I have NEVER read David Copperfield. But don't worry about me, I plan on reading this Dickens' story soon.

I'm sure I would have enjoyed this book so much more if I had been familiar with some of the books/characters mentioned. Looks like my TBR pile is gonna grow even more...

This gets added to my favorites shelf. I can't wait to give it a second go!

The narrator is the real MVP of this story

If it weren't for Calum Gittins, I would not have finished this story. I found the main character (Rob) to be an insufferable bore. The premise was interesting, and the other characters were okay, but the author definitely chose the absolute wrong perspective to tell this story from.

This book is a lot of fun; great summer reading. The reader does an excellent jobs with all the voices and accents. Very entertaining.

Listen to this book if you can't sleep. You will be snoring in no time.

Needed to be 5 hrs shorter.

This book had great potential, but parts of but were too drawn out. The protagonists at times were winey and became annoying. Overall the storyline line was decent, but needed editing.

Initially I was skeptical but curious fortunately for me It was a wonderful e-discovery. Take a chance you won't be disappointed.

If you read the books we were assigned all through high school, you will remember them in surprising detail as this story progresses. If you didn’t read them, this book will make you want to. In the meantime, this book is fabulous, start to finish, surprisingly detailed and engaging. The characters are substantial, amusing, and devoted to their side of the story. The writing is first-rate, especially the dialogue.

Only picked this up because I have a son of the same name. Turned out to be a very good selection! This story was really creative and extremely well-written. The Dickensian world in all it's original dark glory is brilliantly (and literally) overlaid in this one. It's fast-paced, humorous, quirky, and sometimes terrifying qualities come to life right before your mind's eye, especially if you have read the books mentioned in this book. This is DEFINITELY a reader's read!