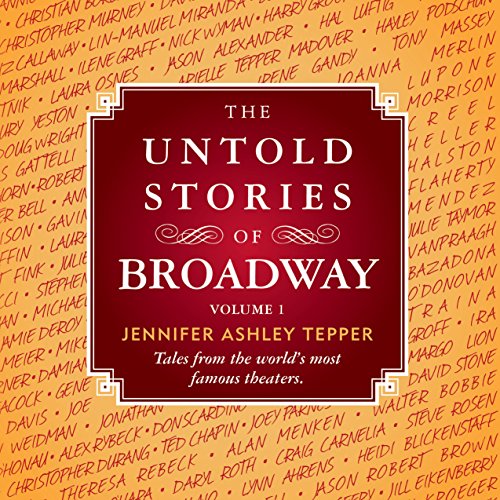 The Untold Stories of Broadway

The Untold Stories of Broadway

Do you wish you were in the audience during Barbra Streisand's final performance of Funny Girl on Broadway? Do you wonder how far Jonathan Groff was willing to go to score tickets to Thoroughly Modern Millie? And are you dying to know which beloved TV star and Tony Award winner was caught with his pants down in front of a movie legend?

From opening nights to closing nights. From secret passageways to ghostly encounters. From Broadway debuts to landmark productions. Score a front row seat to hear hundreds of stories about the most important stages in the world, seen through the eyes of the producers, actors, stage hands, writers, musicians, company managers, dressers, designers, directors, ushers, and door men who bring The Great White Way to life each night.

You'll never look at Broadway the same way again. This is the first audiobook in a multi-volume series that will tell the stories of all of the Broadway houses. Volume 1 includes the Winter Garden, the Richard Rodgers, the Marriott Marquis, the Al Hirschfeld, the Neil Simon, the August Wilson, the Mark Hellinger, and the Lyceum: eight Broadway theaters that light up New York City.

What listeners say about The Untold Stories of Broadway

Would you listen to The Untold Stories of Broadway again? Why?

Listened to Untold Stories on my long flight to New York City. I landed feeling like I had a new appreciation for the great white way. If you are heading to New York or just a fan of Broadway this is the book for you.

Have you listened to any of John David Farrell and Rebecca Surmont ’s other performances before? How does this one compare?

I liked how there were two narrators. The book is a compilation of hundreds of interviews and two readers made it easy to keep track of who was telling the story.

Yowza. I wanted to like this so much. By the 113th Merrily We Roll Along reference I grew numb. I also love Merrily. And I was bored.

Made My Trip to NYC More Fun!

I listened to this book on the drive to NYC and knowing about everything that had happened in these historic places gave me an even greater appreciation for them. While the rest of my family was focusing on the stores in Times Square, I just wanted to walk down the side streets!

The book was written based on a lot of interviews so it is very conversational. It's very accessible but I imagine that it could occasionally be easy to stumble over some of the more colloquial phrases while reading. I liked the audiobook because hearing the narrators (one male and one female) read those sections made it just sound natural.