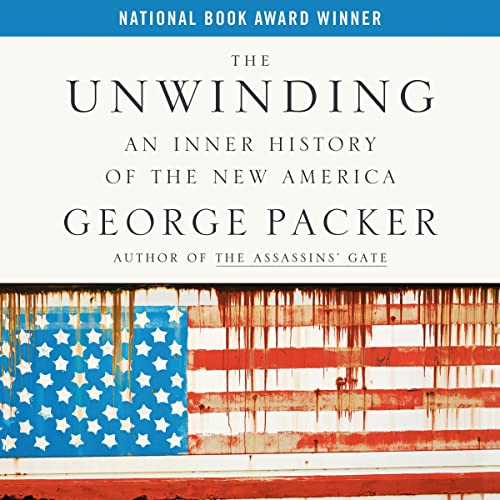 Written by: George Packer
Narrated by: Robert Fass
Try for $0.00

A riveting examination of a nation in crisis, from one of the finest political journalists of our generation. American democracy is beset by a sense of crisis. Seismic shifts during a single generation have created a country of winners and losers, allowing unprecedented freedom while rending the social contract, driving the political system to the verge of breakdown, and setting citizens adrift to find new paths forward. In The Unwinding, George Packer, author of The Assassins’ Gate: America in Iraq, tells the story of the United States over the past three decades in an utterly original way, with his characteristically sharp eye for detail and gift for weaving together complex narratives.

The Unwinding journeys through the lives of several Americans, including Dean Price, the son of tobacco farmers, who becomes an evangelist for a new economy in the rural South; Tammy Thomas, a factory worker in the Rust Belt trying to survive the collapse of her city; Jeff Connaughton, a Washington insider oscillating between political idealism and the lure of organized money; and Peter Thiel, a Silicon Valley billionaire who questions the Internet’s significance and arrives at a radical vision of the future.

Packer interweaves these intimate stories with biographical sketches of the era’s leading public figures, from Newt Gingrich to Jay-Z, and collages made from newspaper headlines, advertising slogans, and song lyrics that capture the flow of events and their undercurrents. The Unwinding portrays a superpower in danger of coming apart at the seams, its elites no longer elite, its institutions no longer working, its ordinary people left to improvise their own schemes for success and salvation. Packer’s novelistic and kaleidoscopic history of the new America is his most ambitious work to date. Includes bonus content read by the author.

What listeners say about The Unwinding

Superb Social history of the USA

Very much enjoyed this superb book which consists of dozens of voices and stories from the 70s through to the post 2008 financial crisis. I found it to be compelling listening and a real meditation on the meaning of the American Dream and the shift of economic power in the USA from the industrial heartland and the South to Silicon Valley and Asia. It could easily have become turgid in the wrong hands and I read a couple of reviews suggesting packer should have weighted down his narrative with theory. I disagree strongly with that assessment - his characters and their stories carry the narrative and his over-arching themes extremely well. One last point, reading this book near the end of the Trump presidency it is extremely clear the fertile ground that brought him to power. What cries out from the voices in the book is how for many Americans progress and hope means a return to the past - an unwinding of the unwinding (globalization) - as the ranks of the middle class are thinned and wealth is incredibly and increasingly concentrated.

I am not a writer of reviews, but I could not let the low ratings for this book stand unopposed! In "The Unwinding," George Packer follows the lives of a variety of people, as a way to clarify wildly opposing viewpoints about what has happened in American society this last century. Here is history told as vividly as the best fiction, and it won my sympathy for people I would be unlikely to meet. A few high-profile people (like Oprah) come into the narrative. But some of the most revealing chapters cover U.S. citizens who seek meaning and success, work hard, "do everything right," and rarely make the headlines. I would recommend this book wholeheartedly to anyone, with any political belief, who is trying to make sense of what it means to live in the U.S.A.!

George Packer drives a stake into America’s heart in “The Unwinding”. American anger, fear, and frustration build in the minds of all—whether Republican, Democrat, Tea Partyer, or Libertarian.

Whether an accolade of private enterprise or government, Packer offers stories of Americans that show American’ belief makes no difference because America is no longer a land of opportunity but a land of greed; not of the free but of the shackled—a risk noted by Thomas Hobbes in the “Leviathan”. The shackles come from society’s failure to protect individuals from the tyranny of special interests. One side argues that it is because of ineffective government–the other side argues it is because of too much government.

The unwinding of the financial crises reflected in the dot-com bubble of 2000-2001 and the 2007-08 sub-prime mortgage crises unfolds in stories told by Packer in this disturbing narrative. America has become a nation of extremes with each extreme using whatever means necessary to deny success of either “tea party”, “libertarian” or “occupy wall street” followers. The consequence is a “do-nothing” congress, an ineffectual President, and a politicized Supreme Court. One is left with fear, anger, and frustration after completing Packer’s diatribe. The only consolation is in history.

I really like the way Packer has attempted to make his points about how America has unwound. He has chosen to pick out of number of personalities and historical figures that we know and other folks we don't and wind them around each other in a cohesive contemporary history tale.

If you like history, you will like this book. However, if you are a memoir fan you will not because he skims the surface of people and there are personalities you may not like or agree with. Also, if you are fiction reader lover an only tolerate history you should pass.

I think that Robert Fass did a nice job narrating, his voice is pleasant enough. I think this book could have benefited from editing; maybe as much as 1/3 could be lopped off. With all that said, I do recommend this book to the history buff and for both liberals and conservatives.

Very well written and even a little scary.

Great presentation of the last few decades and the politics and economic issues Americans face.
America is on the decline, thus the unwinding. It's systematic and not caused by one party or person. But it is happening. I was very impressed with the many and diverse people the author uses to make his point. Every class and race is represented. We are all affected.

I didn't feel that it was biased, which I appreciate. Very impressive style of writing!

An author to watch!

Everyone should listen to this book. Right AND left. Perfect description and history of the evisceration of the US middle class by the elected and non-elected powers that be in the US. Makes the solutions obvious. A brilliant, subtle, "come together" theme.

The Best Summary of the Last Decade or Two

This is a book that simply follows a few people through the years. Some are known, like Oprah, but most are not. It works through the political changes and the Housing Bubble, the loss of good jobs and the rise of corporate power. There are parts I skipped, but it is easy to pick up somewhere down the line. Most of it is not very pleasant, but maybe if people would think this stuff through, we would make better decisions.

Nostalgia, reality, mean streets ... the cumulative sweep and power of this book knocked me out. Dozens of interwoven characters, themes, as challenging as the best of mysteries. How did we wind up in a landscape of fast food and bad vibes? The clues are all here.

Many different well told stories, but not sure why

I did like the book enough to listen to it all. There are about 20 people whose stories are told. Most of the people stories are from non-famous people with exceptions such as Colin Powell, Oprah Winfrey and Newt Gingrich.

Each person's story was interesting and the author tells them very nicely. I'm not sure how in total they tell the story about the unwinding of America. I usually read science books and the point behind those stories are explicit and I understand why those books are written and there is nothing left to the imagination for me to understand. This book was different.

I can understand how the financial disaster affected lives and the author tells those stories marvelously. But he also tells other stories. For example, I'm not sure why he was so apologetic for Colin Powell's speech at the UN for recommending war with Iraq.

Overall, if your like me and need to be told why the things you are reading are important in totality, this book might not be as good to you as it is to others.

And couldn't stop listening. It just makes so much sense. I love the USA but I am so sad to see this happening.
Then again, great story and great author.

somewhat disjointed and never pulled together

as noted in the title, this book is somewhat disjointed. 1 struggles to find the actual meaning behind the authors ramblings story or should I say stories. The highlight of this book is the performance. if I had to read it on a paper page or Kindle, it would have been a struggle to get through.

I would recommend other books on a similar topic well before this one.