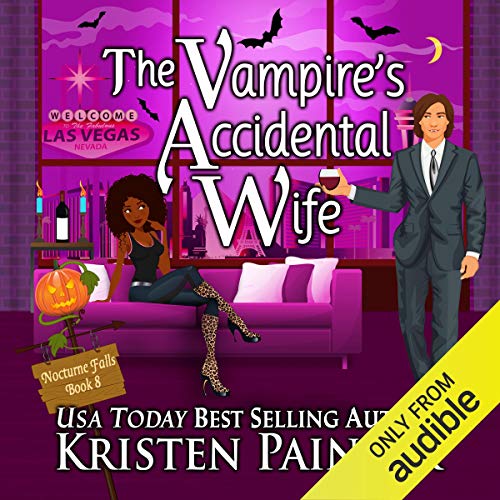 Written by: Kristen Painter
Narrated by: B.J. Harrison
Try for $0.00

Welcome to Nocturne Falls, the town that celebrates Halloween 365 days a year.

The tourists think it's all a show: the vampires, the werewolves, the witches, the occasional gargoyle flying through the sky. But the supernaturals populating the town know better.

Living in Nocturne Falls means being yourself. Fangs, fur, and all.

Las Vegas headliner and vampire Desdemona Valentine is one cool, collected diva on the outside. On the inside she's petrified of falling in love after her last relationship nearly killed her...literally. Protecting her wounded heart makes for a lonely life, but she has her fame and fortune to keep her company. Who needs anything more?

Julian Ellingham does. One look at Desdemona onstage, and the vampire is smitten. She initially ignores him, but his relentless pursuit pays off when a wild night ends in a Vegas wedding. Finally Julian has everything he wants while all Desdemona wants is...a divorce.

Julian sweet-talks Desdemona into letting him prove his love, but his time is running out. Especially after someone repeatedly tries to turn his bride to ash. When Desdemona flees Vegas for the spooky streets of Nocturne Falls and Julian's protection, he's more than willing to help out. But can he convince Desdemona to trust him, or will "death do us part" become a reality?

What listeners say about The Vampire's Accidental Wife

This series is addictive

I am decidedly not a romance reader, but somehow I love this series! The world building is clever, the narrator is talented and the stories have just enough of a twist in the mystery to keep me wondering about the plot even though I know there will be a happy ending. I really enjoy the romantic tension without the graphic details (why can't everyone do this ?) . The author has managed to write a romance series that even this romance series hater truly enjoys.

As with all Kristen's books, this was amazing! There aren't good enough words to express how great her books are. I loved these characters. Desdemona is a great match for Julian. It was interesting who was stalking her. We have a mention of Harlan. I hope he gets a book soon. I just love him. Of course, my favorite, Birdie, plays a huge role in this one. I can't wait for you to read/listen to it.

Who could resist this narrator? He is by far one of the best voices out there. He is a natural talent at all different voices.

This may be my favorite BJ Harrison yet! His ability to change his voice for so many diverse characters is incredible. There is no doubt who is speaking in the book when you listen to BJ Harrison.

Solid 5 stars across the board.

THIS IS ONE OF MY FAVORITE SERIES. I HIGHLY RECOMMEND IT. THE STORIES ARE GREAT AND THE NARRATIVE IS SUPERB.

This one fell quite a bit short for me.

Ok to start with there were so many cliches in this book. For example;. female lead is being stalked and someone already tried to kill her so of course she thinks she can take care of herself and goes out to a bar where she tells people exactly who she is and basically holds court with a bunch of strangers who have friends in the town she is being stalked.
Then male lead thinks he is perfectly safe to meet up with said stalker alone and gets shot with a tranquilizer dart and almost dies.
Then of course the female lead and the town busy body figure out a way to find him but don't bother calling the Sherriff who is already searching so they can speed up the process.
And don't get me started on the female lead repeatedly telling the male lead she can't stay married to him and then getting upset when he signs the divorce papers.

Better than I expected!

The Vampire’s Accidental Wife is book 8 in the Nocturne Falls series. This book is about Julian Ellingham and Desdemona (Desi) Valentine Clark. Julian is the youngest of the 3 Ellingham brothers, but still well over 400 years old. Julian and Desi are both vampires. I’ve been binging this series this year, but when it was time to read this book, I stopped. I put off reading this book for a few months because I wasn’t all that excited to read about Julian. In all of the other books that he has appeared in, he was made out to be kind of a tool. He was supposedly immature and a womanizer and not one to be taken seriously. Reading this book, that all turned out to be incorrect. I did kind of struggle with the departure from his personality in prior books to what it was in this book because it was never addressed. We really needed Julian to have a conversation with his brothers to clear up their misconceptions about him being an irresponsible playboy. They all loved each other but one of the issues Julian had was that he felt his brothers didn’t take him seriously or respect him as a man and as a contributing member of their family and, essentially, empire.

Julian was very caring and devoted to his wife, even though their marriage only took place after an extreme amount of champagne was consumed, and Desi was clear that she did not want to be married to anyone. The big mystery and suspense in this book is that someone is out to kill Desi and has been stalking her. I really enjoyed this book. It was very well rounded and complete. The romance was great, the character development was excellent for Desi, and the mystery was good.

As usual, we got to see many of the other townsfolk from Nocturne Falls and watch them come together in a time of need to help out Julian and Desi. I really love this town and all of the people in it. I look forward to continuing the series.

The narration was good, as usual. It is the same narrator as the rest of the series and he has a lot of different voices. I recommend this audiobook.

This story was disappointing I’m afraid. Julian was suddenly insipid and lacked the charm and snap he had in earlier books. Dessie didn’t have as much depth as the other female characters and the narrator’s voice for her was extremely difficult to listen to. Sorry. Thankfully, Bertie was in the book was her usual funny and charming self. I’ve loved all the other books...just not this one.

O my i love theses books. cant wait for next one I love these series they're so awesome I just wish there was a female and male voice I say it on every book review that's the only thing wrong with these books is it needs a real female voice and a real male voice

“Is that an engagement ring or a skating rink?...it’s a boulder”

Finally, Birdie plays a bigger part in this book than the previous ones, she’s definitely a character. As far as Julien and Desdemona’s story, it’s sweet, but I feel like Julien is incredibly impulsive, so much so that he is unreliable. Also, Desdemona is a party girl, for a guy claiming to be growing tired of the playboy lifestyle it doesn’t seem like a happy match, it works out, but I’d have to question the stability, if they were real people would their impulsive partying behavior strengthen their bond or make it unstable.

desi was not a likeable character at all early on in the story. she evoked some pretty strong emotions from this reader, which is a testament to the author's talent. I couldn't connect with her on any level.

Julian I loved the insight into his character and his playboy ways. I'm sad to be almost finished with this series. They were so enjoyable and entertaining. I LOVED the narrator he did a fantastic job throughout.