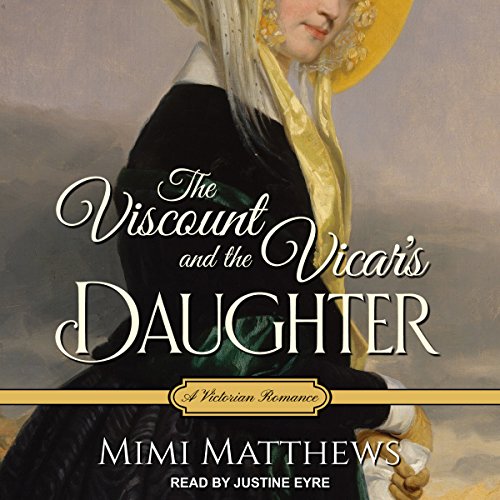 The Viscount and the Vicar's Daughter

Written by: Mimi Matthews
Narrated by: Justine Eyre
Try for $0.00

After years of unbridled debauchery, Tristan Sinclair, Viscount St. Ashton has hit proverbial rock bottom. Seeking to escape his melancholy, he takes refuge at one of Victorian society's most notorious house parties. As the Christmas season approaches, he prepares to settle in for a month of heavy drinking...until an unexpected encounter changes his plans - and threatens his heart.

Valentine March is not the drab little spinster she appears to be. When her new job as a lady's companion lands her smack in the middle of Yorkshire with England's most infamous rake, she resolves to keep her head down and her eyes fixed firmly on her future - a future which most definitely does not include a sinfully handsome viscount.

A match made in scandal

A friendship is impossible. An affair out of the question. But when one reckless act binds them together, will two star-crossed souls discover there's more to each other than meets the eye? Or will revelations from the past end their fragile romance before it begins?

What listeners say about The Viscount and the Vicar's Daughter

For some this might have been a little mawkish, but I found it swetly delightful. The characters are believable and likeable. Mimi Matthews is a new writer for me, but she's very talented in telling a good story. Justine Eyre, also talented, did a really great job in her narration. I would recomment.

I love this author but found this short novel rather boring. Not much of a plot and I had trouble getting to know the characters.

I love Mimi Matthews but this insta love was too much for me. It was a quick listen, so I didn’t expect anything too complex, but there was no drama leading to a fall in love, it was just THERE. Even for the time period and arranged marriage etc, it just wasn’t realistic and left me wishing for more of the characters, more of their story, definitely to see more of them falling/being in love.

Not as predictable as other British Romance novels. Easy and fun to listen to while I work.

I would have really enjoyed this book except I cannot stand the way Justine Eyre narrates. I know a lot of people like the way she talks, but to me, it is like nails on a chalkboard. There have been many books I would have read but when I see her name as the narrator, I completely avoid them. With so many other exceptional narrators out there, I don’t understand why anyone selects her. Sorry.

Once more Matthews has written a compelling novel that takes us away from our 21st century lives and transports is to another time and place. Fairly predictable plot, but the road to resolving romance is fun. Great narration!

Grumpy Hero who having been not believed has been living down to his bad reputation when he meets a Vicar’s daughter who does believe in him and it makes for a delightful love story that I enjoyed very much.

When doing characters, the narrator is flawless. I could barely stand to listen to her narrate the other parts-ssoooooo nasally and whiney. Sweet story, would have been better with Nicholas Boulton.

The authors novel, the siren’s song, has a much more compelling storyline. The rake turned saint just didn’t ring true this time.

The story is good but it ends unexpectedly short. The story is not cut off but seems to end out of nowhere