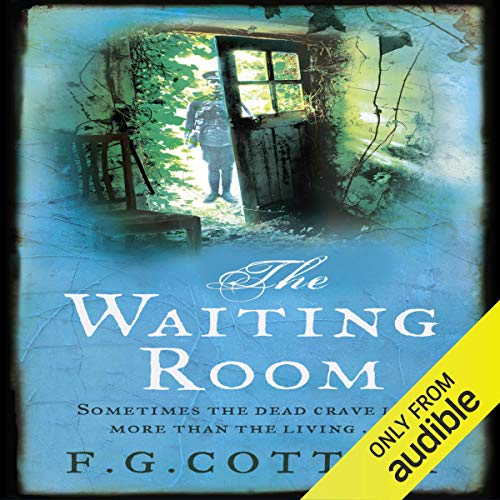 The waiting room stands on a crumbling railway platform at the edge of a retired rock star’s vast estate. Abandoned to dereliction and isolated by a moat of thorny wilderness, it used to be a playground for his children. Until strange music and the terrifying spectre of a leering soldier frightened them away. Julian Creed is TV’s most popular ghost hunter. Only his small production team knows he is a complete fake who doesn’t even believe in the paranormal. Until he spends one night in the waiting room.

What listeners say about The Waiting Room

PLEASE PLEASE GIVE US MORE OF COTTAM'S BOOKS!!!!!!

Before I forget to give proper props to the narrator whose voice carries you thru all the literary twists & turns as you try to figure out what's supernatural & what's real. Rintoul is one of my absolutely favorite narrators along with R.C. Bray & Sean Barret. His voice is so smooth, the perfect compliment to the subtle growth of the true horror haunting this story.
The book is definitely one of Cottam's as again, I love how characters from his other books are included as well. So it's a bit of the new with a dash of the old which combines to give everything within the plot a kind of precarious balance where one minute you think you might have it but then the next you are back on the edge of your seat biting your nails because what you thought was fixed wasn't exactly what the plan should have been. It's hard to write a review without going into detail, and giving things away. So I will just say that this is an amazing tale of the supernatural & I have found that British horror tends to have a lot more creep factor while here in the US, the focus is more on violence, gore, & that type of stuff rather than allowing the story to stand on its own as any truly good horror novel should be able to. As I am also a fan of Lindqvist, Let The Right One In & The Harbor, I wonder if it is more of a British style of writing that books not try to stand on gore alone to sell a book.
I really hope that while carrying the few other Cottam tales currently offered on selection such as the Colony Trilogy, Brodmaw Bay, A Memory of Trees, & The Magdalena Curse; that audible will also add some of his other titles that are also top notch supernatural reads. These include An Absence of Natural Light, The House of Lost Souls, Dark Echo, The Lazarus Prophecy, & The Summoning. come on Amazon!!! If its available on Amazon UK, why shouldn't the US also have full access to the rest of this author's work? I've noticed it's the same with other foreign authors including the absolutely horrid way that ya'll have chosen to take the Merrily Watkins series by Rickman & not even seem to be able to release the series in order. They are just randomly there without the first couple of books in the series. Please audible, give us MORE COTTAM!!!!!!!

Strange Meeting in the Waiting Room

I’m not sure how this title had escaped the crosshairs of my must read list, but I’m rewarded for finding it now. So much texture and layered themes. Listen carefully, ghost story telling at it highest form. Take your time and savor!

love the narrator, always a great ghost story... the kind that raises the hair on your neck