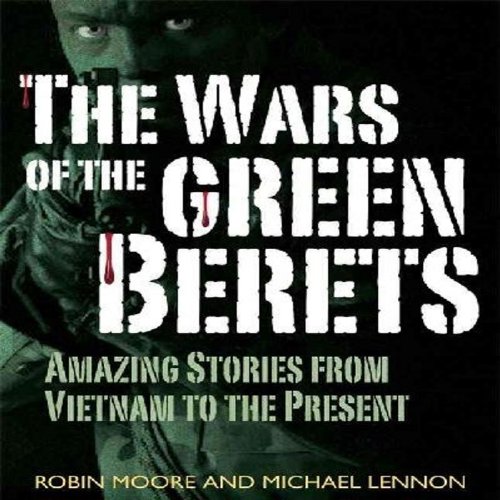 The Wars of the Green Berets

The United States Army Special Forces, also known as the Green Berets, handle the most high-risk, unconventional, undercover missions in the U. S. military. And now, in Robin Moore and Michael Lennon's The Wars of the Green Berets: Amazing Stories from Vietnam to the Present Day, listeners learn exactly what goes on when these brave, intelligent men are in the field. A riveting performance from narrator Tori Kamal brings tension to these fictional stories, including battles against Al Qaeda, undercover missions inside Iraq during the reign of Saddam, and fighting on the Cambodian border during the Vietnam War - tales sure to thrill and terrify an audience yearning to experience the realities of special reconnaissance and counter-terrorism.

Authors Robin Moore and Michael Lennon team up in this exciting new novel to tell the "fictionalized" stories of the men who have risked it all for the U.S.A.: the Green Berets. They take us from firefights on the Cambodian border during the Vietnam War to the streets and alleyways of Iraq today. They teach us what it was really like to patrol the streets of Mogadishu in the days of Black Hawk Down. They show the horror that was Saddam's Iraq during the first Gulf War. They take us to the moonscape that is Afghanistan in search of the Taliban. The Wars of the Green Berets continues the saga of Moore's classic The Green Berets, revealing more than a few tantalizing secrets and anecdotes for the first time.
©2007 Robin Moore and Michael Lennon (P)2012 Audible, Inc.
Military Individual Wars Americas
Show more Show less

What listeners say about The Wars of the Green Berets

Very interesting story, but I couldn't finish it because of the horrendous narration. The guy kept spelling out every abbreviation... C-P-T and S-S-G-T, rather than Captain or Staff Sergeant. T-O-W missile, instead of tow missle. But the kicker is pronouncing "subsequently" as "sub see quently". Get a narrator that speaks English and has some understanding of military terminology.

Who would you have cast as narrator instead of Tori Kamal?

What would have made The Wars of the Green Berets better?

For one thing, more than a collection of simple housekeeping stories. Most of the stories are a couple minutes long, have nothing to do with Special Forces, and are likely to do more with boredom in a war zone than any action.

Has The Wars of the Green Berets turned you off from other books in this genre?

Well, certainly by these authors. No more than a money run for Moore.

The mispronunciation and the explanation of acronyms that made the nomenclatures actually longer than if he'd used their full formal name.

What made the experience of listening to The Wars of the Green Berets the most enjoyable?

The stories traverse various times along the history of the SF group, and is told from their perspective.

What other book might you compare The Wars of the Green Berets to and why?

Need someone to learn to read the military info, its very confusing when he reads verbatim and not translates like a reader would. This is the same for all abbreviations. For example "cee pee tee Jones" because he reads CPT Jones should be read Captain Jones. Every rank, unit, etc is read the same way. Can ruin the read.

More about the Green Berets....eventually

Probably a good book. Interesting stories. Im sure there is a point....eventually. But it is a long time getting there. And the "Green Beret" parts are far less apparent than the title would suggest.

What is absolutely clear is that this was a horrible audio performance. It was performed by someone who apparently received absolutely no coaching from anyone with even a modicum of military experience. A cringing listen.

He was reading words, not telling a story. He sellout acronyms that are meant to be said as words,, or refer to ranks and titles..

This needs to be redone...preferably by someone who has served at least a couple of years on Active Duty in the US Army. Failing that, the reader needs direct coaching by someone with applicable military experience. [Yes, I'm volunteering.]

Erratic and all over the place

This is not a book. This is a series of short stories framed as chapters masquerading as a book. Bouncing between Vietnam and Saddam Hussein’s origin story, there are whole chapters dedicated to Saddam with zero mention of Special Forces. This is nothing more then filler to make a brochure into a “book.” Superficial storylines, no depth to the characters or development of a storyline. There are better titles on Special Forces in Vietnam. I cannot recommend this book.

This is worth listening too but jumping around the story line detracts from the overall effect.

Who picks the narrator?

I have no idea where this guy came from, but he does not ever need to narrate a military book again!
I mean reading the ranks as acronym 's has to go!! S.S.G. Staff Sergant, S.F.C. is Sergant First Class. 1L.T. First Lieutenant! M.G. Major General! M.A.J. so and so is Major.. L.T.C. is Light Colnal or Lieutenant Colanl.
H.I.N.D. "D" is Hind D.

No fast roping from Little Birds. These are equipped with 4 outward face external seats!

Now as far as his tone. More like a robot reading this story. The tales themselves are good. He ruined this book! Tori Kamal has slaughtered this book! I can not believe the authors chose this guy!

This book seems to have been written by someone that has NO clue about army life and lingo, much less the special forces community. I barely made it through the first few chapters due to constant mispronunciations or just out right incorrect verbiage. I would never recommend this book to anyone that seeks true knowledge about the Green Berets.

Great stories that all Americanshould know.

Perfect lengths of chapters stuffed with well narrated stories. Just wish the narrater could pronounce more of the words properly and just say General instead of G E N so and so. wasted time with always spelling out an abbreviation instead of just saying what it’s for. overall though awesome jib thank you!