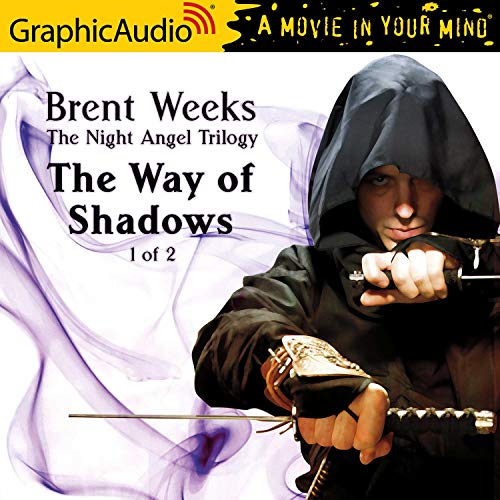 The Way of Shadows (1 of 2) [Dramatized Adaptation]

For Durzo Blint, assassination is an art - and he is the city's most accomplished artist.

For Azoth, survival is precarious. Something you never take for granted. As a guild rat, he's grown up in the slums and learned to judge people quickly - and to take risks. Risks like apprenticing himself to Durzo Blint.

But to be accepted, Azoth must turn his back on his old life and embrace a new identity and name. As Kylar Stern, he must learn to navigate the assassins' world of dangerous politics and strange magics - and cultivate a flair for death.

Its not pervy as the other review suggests.
It offers light descriptions at times of scenes when a courtesan needs such descriptions, but it is by no means smut.
The beginning of the book took me a little effort to get into, but like an anime it takes a couple chapters to get into; I will be picking up the second book as I write this.
Characters are archetypes of your run of the mill fantasy characters, with the usual twists to make them a little more interesting.
Voice acting was pretty good, sounds were mildly unbalanced at times, but overall good. Perhaps I have my phone equalizing the audio, but I doubt it; there were few times I had to relisten to a part where I thought I missed something, but only to realize I didn't really miss anything.

I didn't have issues with effects over spoken dialog as I've read in other reviews of these types. The sample of this first book has the worst of it when you start hearing sword clanking. I listen loudly so maybe that helps, but I could hear every word.

Anyway, I'm getting all of these. This trilogy is what got me into reading fantasy and with the multicast and sound effects, it just puts you in the damn room, I love it.

I'll start with the positives:

Each character is individually voice acted. The characters feel real and distinct, and they make even the side characters stand out.

Dialogue is quick and efficient. Nothing felt unnatural or choppy.

This book is terrible. The plot is overall okay, but a pervy author and garish clichés bring down the quality of the book from a 4* to a 2*. It's very bad.

The "ambient" noise in this edition is horribly balanced. To say they overpower the narration is an understatement. It's so bad that in scenes with combat, all you're going to get out of it is clanking metal and grunts from the characters. The narrator sounds like a murmur underneath the noise.
At it's worst, the narrator is overwhelmed entirely by music that hardly does anything for the scene. In the Warrens, you won't be hearing the novel, you'll only hear a woman chanting.

I did purchase and listen to Part 2 of this performance, but I will not be continuing on to the rest of this trilogy, especially since each book must be purchased in individual parts. Very disappointing.

there were times when due to the audio mixing the background music was louder than the current storyteller. this made it hard to keep track of what was going on and to hear the storyteller you have to turn the volume up to uncomfortable levels.

Great narration had one distraction

Great job narrating but the background music and noise of fights and town noise was too much. At times could not hear the narration.

I really liked the book. It was extremely visceral. Not only the sound affects and various voice actors, but the writing itself. I really enjoyed the book and bought the second one halfway through the first.

3rd time with this story

Great voice acting and narrator, my only complaint is some times to background noise drowns out the narrator.
this includes some music, voices of characters, and sound effects.

easy enough to listen to if not expensive for just half a book and so much background noise almost overwhelming some parts. I'll have to relisten to the 2nd chapter because I completely missed the rat conclusion not a big fan of most the narrators other then the masters, the overall narrator and a few side characters maybe idk still not a bad story just expensive for half the book

My first but surely not my last GraphicAudio!

One of the most detailed ethic and disease I have listen to and and dissipation listening to the second book tonight. If he hasn’t tried graphic audio you’re in for a real treat!