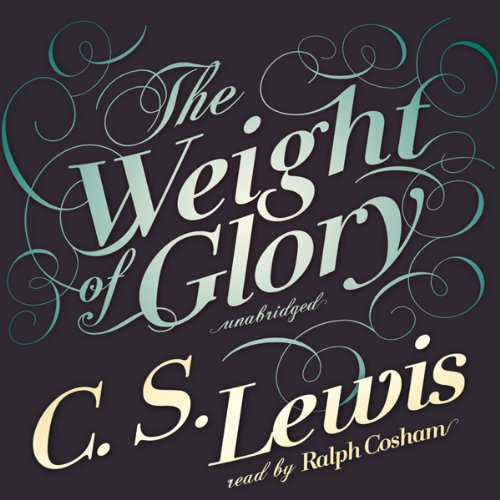 The Weight of Glory

Selected from sermons delivered by C. S. Lewis during World War II, these nine addresses show the beloved author and theologian bringing hope and courage in a time of great doubt. "The Weight of Glory", considered by many to be Lewis’s finest sermon of all, is an incomparable explication of virtue, goodness, desire, and glory.

Also included are: “Transposition”, “On Forgiveness”, “Why I Am Not a Pacifist”, and “Learning in War-Time”, in which Lewis presents his compassionate vision of Christianity in language that is both lucid and compelling.

Clive Staples (C. S.) Lewis (1898–1963) was one of the intellectual giants of the 20th century and arguably the most influential Christian writer of his day. His major contributions in literary criticism, children’s literature, fantasy literature, and popular theology brought him international renown and acclaim. He wrote more than 30 books, and his works continue to attract thousands of new readers every year. His most distinguished and popular accomplishments include The Chronicles of Narnia, Out of the Silent Planet, The Screwtape Letters, and Mere Christianity.

What listeners say about The Weight of Glory

Good, quite heavy at times. Great reader as always. I would have appreciated a little bit better defined separation between chapters as this is a collection of not necessarily connected writings. Sometimes I was halfway through a chapter before realizing that we were on a new topic. Lewis tends to go off on a tangent as well as finish a thought abruptly. This combined with a less noticeable chapter transition proved slightly confusing at times hence the 4 stars on performance. Could even play a little ingle or something in between.

I would have appreciated knowing where some of these essays were taken from while listening so as to more quickly find their source material later on, but the reading was wonderful and I enjoyed getting these thought provoking snippets!

Would you consider the audio edition of The Weight of Glory to be better than the print version?

Both are wonderful
Since Weight of Glory was a sermon - it's great to hear it.

What was one of the most memorable moments of The Weight of Glory?

Lewis's logic in Why I am not a Pacifist

easy to understand and done with appropriate emotion.

Wonderful selection of Lewis' writings, full of encouragement and deep thought. The title essay is particularly valuable and made me long to know Jesus better.

If you could sum up The Weight of Glory in three words, what would they be?

This book can change your life, this is CS Lewis at his finest.

What was one of the most memorable moments of The Weight of Glory?

The perfect voice of CS Lewis

I was totally amazed, I must admit , by all the stories that I have listened to here. Being my first time listening to Lewis's writings I loved the way he describes his thoughts on christiananty. Lewis writings make you think.

CS Lewis...always worth a read (or listen)

CS Lewis...always worth a read (or listen) in my opinion. I'm constantly being challenged and inspired by Lewis' profound statements and analyses of the human heart.

This is a reading of several of CS Lewis' lectures (sermons) on Christianity. Lewis wrote on a highly intellectual level in a U.K. vernacular, and the book was read by a man with an English accent, giving the it a delightful, almost biblical (KJV) tone. The ideas come quickly, one after another. I've ordered a printed copy of this book and look forward to savoring it idea by idea.

more than worth the time

I have listened to this many times. deep challenging thoughts. has impacted my life and walk with God

Lewis' understanding and application of theology to life is unparalleled. Both his faith and his power of reason come across brilliantly.