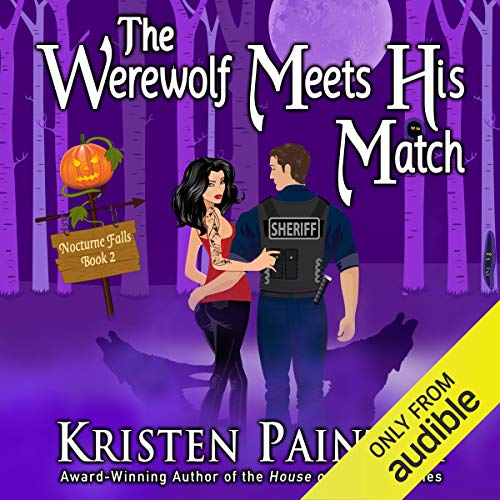 The Werewolf Meets His Match

Written by: Kristen Painter
Narrated by: B.J. Harrison
Try for $0.00

Welcome to Nocturne Falls, the town that celebrates Halloween 365 days a year. The tourists think it's all a show: the vampires, the werewolves, the witches, the occasional gargoyle flying through the sky. But the supernaturals populating the town know better. Living in Nocturne Falls means being yourself - fangs, fur, and all.

Getting arrested wasn't on werewolf Ivy Kincaid's agenda when she arrived in Nocturne Falls, but her life rarely goes according to plan. The upside of spending the night in the local lock-up is finding a hotel room is no longer a worry...but the downside is the man she's come to marry will get his first impression of her behind bars. That's not exactly the way Ivy was hoping to meet her pack's sworn enemy...aka her fiancé.

Sheriff (and werewolf) Hank Merrow is the alpha's heir. Everything he's ever done, from becoming an Army Ranger to serving in law enforcement, has been in preparation for the day he'll take over. Getting married to cement a shaky truce is no different. Hank will do his duty, even if it means shackling himself to a woman he has no intention of liking, let alone loving. But Ivy is nothing like Hank expected. As feisty as she is beautiful, she's as determined as he is to make a go of marriage for the sake of peace between their packs. The trouble is, Ivy has secrets that could destroy everything Hank holds dear...including his newfound love for her.

What listeners say about The Werewolf Meets His Match

The story lines for these books are unique which is nice but they go 0 to 60 in the first couple chapters. For me personally, they are a good read but the narrator for these books drives me nuts! I will not be listening to the rest of them.

Wow, Nocturne Falls is turning out to be one of my favorites series in light romances. The Werewolf Meets His Match was awesome! The story was well written with great characters that were hilarious and the audio performance is off the charts.

I am All In on this series, and look forward to book three being released. Anyone who loves their romances light and on the funny side, will enjoy these stories!

The narrator evokes the emotions of the story.

I received an audible copy of this book in exchange for an honest review.

The Werewolf Meets His Match, written by Kristen Painter, and narrated by B.J. Harrison is a wonderful continuation of the Nocturne Falls Series.

Having already read and reviewed the digital book, it was wonderful to hear new voices along with the familiar voices from Book 1. B.J. Harrison has a wonderful way of differentiating between characters, while evoking the emotions of Kristen's writing.

I loved the characters in this second book about Nocturne Falls, even more than in the first book. I'm excited about future books, as well.
This narrator does an excellent job distinguishing between the male and female characters, without making the females sound whiney. He also makes Hank, the main character, sound very sexy!
This series is light and funny, but with plenty of romance and mystery. It's appropriate for fans of Molly Harper or Jana Deleon's Mud Bug series.

Yes, but only to someone I know likes this type of book. It was a fun read, good characters, bad people, suspense, love, hope and a happy ending. What more could you ask in a story?

Ivy. I loved her, she was decent, she was in a tight spot, had no choice but to follow through with her father's plans - knowing she had to protect her son. My second choice would be Hank - he was honorable and upstanding. The kind of guy every girl wants to meet.

The fight scene - where Little Charlie ran into the circle and brought everyone to their knees. Not saying anymore, if you are using this review to decide to get this book I don't want to give anything away. (Just get the book!)

Well I have to go back to the fight scene again after Charlie ran into the circle; and when the moderator asked him who his father was. That was touching. :-)

This would be an awesome TV series.

I adore this audible! Perfect & fun!

If you could sum up The Werewolf Meets His Match in three words, what would they be?

I really loved the voice actor! He did a great job with the voices, kept the seperate and unique, and didn't hinder my understanding of the story. It's a cute story, pretty fast paced, and easy to enjoy in listening form. It's not something you need a ton of concentration for. It's a perfect listen for a car ride, during workouts, or during a house clean. Charming, funny, well written and well narrated!

Probably the scene where Hank teaches the son something important *no spoilers*. Too perfect.

Yes, but I also want to listen to it again and again.

Nope! Loved it! I got a copy in return for an honest review.

Loved it! Narration was awesome!

I just personally love when the narration includes both sexes! Awesome book! Will recommend this book.

I really enjoy these cozy reads. They make me laugh and have some excitement in each story. B.J. Harrison does a wonderful job. He does a great job at changing everyone's voices and he does well at playing women and men, but I have to say the way he did her fathers and brothers voices made them sounds like back woods hicks. It definitely made the point on them, but her brother's voice made it hard to think that he could be attractive at all with how the father talked and was described. I just keep wanting to listen to the next one every time I finish one. I enjoy the banter and back forth between the characters and the strong characters.

This is a light hearted, easy, and carefree follow up. Lots of smiles and chuckles. It was a nice break from a dark drama. Recommended for a happy feeling.

Where does The Werewolf Meets His Match rank among all the audiobooks you’ve listened to so far?

The Werewolf meets his match ranks in the top 20 books I've listened to so far.

What other book might you compare The Werewolf Meets His Match to and why?

His intonations and accents are wonderful. He makes the characters come to life.

If I had the option, I would have listened to the entire book in one sitting.

I absolutely loved the book. Kristen is an amazing author, and her characters are so full of life. B.J. Harrison is an amazing narrator. He was able to adapt the full array of characters in Kristen's work into voices that when reading you heard. Everything was spot on!