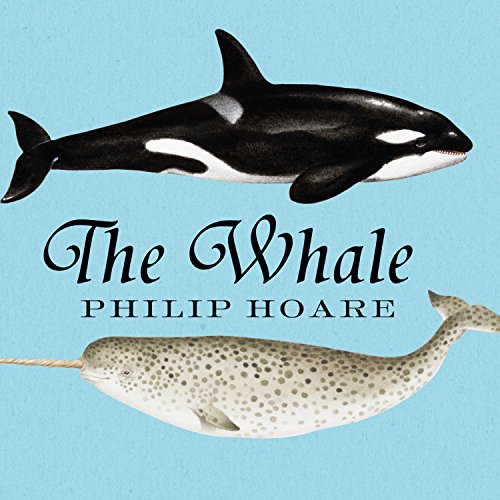 In Search of the Giants of the Sea
Written by: Philip Hoare
Narrated by: Michael Page
Length: 11 hrs and 26 mins
Categories: Science & Engineering, Science

The whale is the largest, loudest, oldest animal ever to have existed. It is improbable, amazing and - as anyone who has seen an underwater documentary or visited the display at the American Museum of Natural Historycan attest - a powerful source of wonder and delight to millions.

The Whale is an extraordinary journey into the world of this fascinating and mysterious animal. Acclaimed writer Philip Hoare visits the historic whale-hunting towns of New Bedford and Nantucket, wanders the streets of London and Liverpool in search of Melville's whaling inspiration, and swims with sperm whales in the middle of the Atlantic. Through the course of his journey he explores the troubled history of man and whale; traces the whale's cultural history from Jonah to Moby-Dick, Pinocchio to Free Willy; and seeks to discover why these strange and beautiful animals continue to exert such a powerful grip on our imagination. A blend of the travel and nature writing in the tradition of Jonathan Raban and John McPhee, The Whale is a gripping voyage into the heart of Hoare’s obsession - and ours.

"[A]deeply moving and thought-provoking biography of the planet’s toughest, yet most vulnerable of prehistoric survivors. The Whale takes us well beyond the limits of what we can see, hear or otherwise objectively "know" about whales, and offers a much more vivid sense of their true magnitude." (Amazon.com review)
"This tour de force is a sensuous biography of the great mammals that range on and under Earth's oceans." ( Publishers Weekly)

What listeners say about The Whale

Some great insights, but too much digression

The uniqueness of this book – combining historical, biological and personal narrative – also makes it a bit hard to follow, especially as an audiobook. In the printed version, quotes from Melville and others are set off from the rest of the text, making them easier to distinguish (or skip), and there are also dozens of illustrations and historical photographs that illuminate the stories. Reduced to a single audio narrative, it loses focus. I also think the narrator is somewhat miscast.

The writing itself is very good, and covers a huge amount of research and reference. Whales are portrayed in language poetic, wondrous, surprising, and occasionally profane (sensitive ears be warned!) You can see the author's inquisitive mind at work as he tries to uncover the essence of these creatures. Unfortunately the journey takes us in so many directions, readers may feel like those whalers at sea, weary from the long periods between actual whale sightings.

OK, but doesn't do it for me

I'm a geek and would like a lot more facts. There are some in this book, but they are heavily diluted by "Whales are really awesome." "Whale are big. Really big." "Let me use some great poetic language to tell you that whales are really amazing animals." "Whales are awe inspiring." (Ok, those aren't real quotes, but they're my take-away from the book. It all depends on what you're looking for in a book.

DO NOT WASTE YOUR TIME OR MONEY ON THIS

I don't know what is worse: the banal blathering of Philip Hoare's emotional reminiscing on any subject even tangentially related to whales for HOURS, the narrators apparent love affair with his own tongue, or the disrespectfully irrelevant quotes from "great authors of the sea" at the beginning of each chapter.
Do yourself a favor and go deaf rather than listen to this blowhole.

Not what I expected.

After looking at the cover and the title I expected more about whales!! Sadly, this book is little about whales, I wish I hadn't purchased this book and looked for one that was really about whales. The cover should have a picture of the author (or Mellvile) and not whales (which is probably what sells the book).

I rarely write reviews except when something surprisingly good or is surprisingly bad. This book unfortunately falls into the latter category. It is surprisingly bad. It's not a book about whales, it's a book about authors (specifically Herman Melville) who have written about whales. After wasting hours on this book (hours which you'll never get back), you'll learn surprisingly little about whales and know more than you would care to about Moby Dick and Herman Melville. Stay away from this book if you're looking for a historical account of the discovery of whales. I'm not sure why you would get this book. Awful, just awful.

I cannot believe that anyone would enjoy this book. It is slow moving little action. I could not finish it.

This lumbering whale of a book does not breach!

What would have made The Whale better?

You know the saying about judging a book by its cover?The cover of this book reminded me of the art motif hung in every cottage I stayed at in Nantucket, Cape Cod and the Maine coast growing up as a child. Simple. Nautical. Vintage.Yeah...I probably should have copied the picture and had it framed or something because that was the end of my enjoyment of this slog.

Has The Whale turned you off from other books in this genre?

The book is called 'The Whale'. I suppose I expected one of two things: either an anthology of interesting facts with the chapters broken down by species or an exciting recount of an adventure told by the Indiana Jones of whale research. What I did not expect was a minute by minute recount of the life of Herman Melville and a series of lengthy inventories of harvested whales over the centuries.

No, it did not turn me off to the genre. Maybe someday I will find a book that just gives a cornucopia of whale facts or is an exciting whale adventure.

Once I settled into the material, I found that Michael Page was a surprising match for the content. His voice, dripping with arrogance, draws out the story the way cognac draws out the taste of your own shoe.

I have to believe that Michael Page, Philip Hoare and whoever gave the critical review of this book are standing in a flat in the East Village together, laughing pretentiously at the world. I don't understand how this could have received such high praise from anyone.

There is an interesting point in the story when the author actually goes on a whale watch. Its a shame that the book took 10 hours to get there.