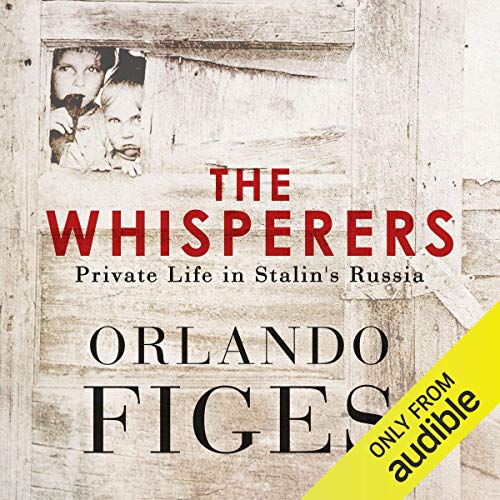 Written by: Orlando Figes
Narrated by: John Telfer
Try for $0.00

Drawing on a huge range of sources - letters, memoirs, conversations - Orlando Figes tells the story of how Russians tried to endure life under Stalin. Those who shaped the political system became, very frequently, its victims. Those who were its victims were frequently quite blameless.

The Whisperers re-creates the sort of maze in which Russians found themselves, where an unwitting wrong turn could either destroy a family or, perversely, later save it: a society in which everyone spoke in whispers - whether to protect themselves, their families, neighbours or friends - or to inform on them.

What listeners say about The Whisperers

It’s hard to even begin to explain the tragedy detailed in this book. It reads like a horrible dystopian nightmare that people cannot wake up from and often don’t even understand they are in. It’s hard to imagine that this world ever existed, but it was very real for millions.

Soviet repression and Stalinism is rightly associated with the Gulag and the extensive network of Soviet prisons. But compared to the entire population, only a small part of Russian society experienced these places. This work explores what happened to the rest of Russian society (it is a book that primarily looks at urban Russia, but much of it could be expanded to the broader Soviet Union).

It details the repressive Soviet “social engineering” experiment, the attempt to control every facet of life – where they lived, who they lived with, where they went to school, who went to school, where you worked, what, when and where you ate. It demonstrates the relentless attempt to destroy every vestige of private life and with it a person’s sense of being an individual. It also shows how ordinary people coped with living in such a oppressive system and how they attempted to mitigate it and maintain some small piece of private life and individuality as a form of resistance to the destruction all around them.

The narration in the audiobook is excellent

A Nightmare few woke up from.

An amazing look at dark times in the USSR.
The narration is excellent, even if he and the author both are people I hadn't heard of before.
I'll wait to listen to more from both.

I can imagine the pain many of these eople went through.

A classic only hampered by poor editing

First, this is read beautifully. The shear number of stories of children's experiences of Stalinist Russia crushes any faith in humanity the reader may have harboured. The book though loses its way somewhat with an arbitrary biography of Simonov and several other stories that seem unrelated.

A moving look at a terrible crime against humanity

I'd recommend it! Gets a little bogged down at points but the fact that the author is speaking for people long since murdered and forgotten by the system that they lived under is important.

In reading this well detailed and researched book concerning the day to day life of Russian citizens. It’s so disheartening to read what they had to go through. All the horrible circumstances that were forced on to them in the name of communism and Stalin. This book attempts to do the individual life stories of Russians but no book can ever reveal the day to day horrible circumstances of having your family ripped from you and even worse having your sons or daughters ashamed of you because you were arrested and sent to a gulag. Stalin’s statement that if were we 10% correct on who who killed or sent to gulags then he was fine with that. Recently, I visited Moscow and the city and people are beautiful. God bless Russia.

wow. this book was amazing.

this was an incredible exploration of the in er lives of people living under stalin.

This is the best book I've read about the effects of Stalin's personality cult on the people in Russia. Most histories focus on top officials or government policies or the military, but The Whisperers is all about ordinary citizens. Orlando Figes used first-hand accounts from people in every part of the USSR in every walk of life. He follows the lives of several families all the way from the October Revolution to the break-up of the Soviet Union, tracking the effects of systemic fear and repression through multiple generations.

John Telfer did a great job reading. His voice was very clear and precise, distinguishing easily between quotations and exposition. I would gladly listen to anything read by him again!

I have listened to several books on the subject of the Stalin regime/the Gulag, and this book elaborates on the subject in its own unique way. Highly recommend it for anyone interested in learning more of the Soviet regime.

There have been multiple exceptional books written about Russia during the time of Stalin's terror. Orlando Figes's work stands out as one of the very best. The story, though it revolves around multiple personalities, from famous Russian personas to regular persons, is easy to follow and continually riveting. Without a doubt, the story of Konstantin Simonov is exceptionally fascinating. This is the perfect fusion of author and narrator. John Telfer gives the perfect voice inflection for the precise time, never over doing it, reverting to monotone. It's utter perfection, just like this book.

Orlando Figes does another great book, and John Telfer is the best nonfiction reader ever!