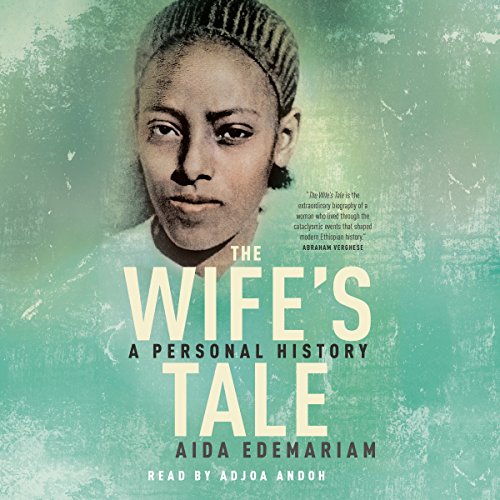 A finalist for the Governor General's Literary Award: The true story of one indomitable woman caught in the tumult of an extraordinary century in Ethiopia, The Wife's Tale has the sweep and lyrical power that captivated readers of Abraham Verghese's Cutting for Stone.

A hundred years ago, a girl was born in the northern Ethiopian city of Gondar. Before she was 10 years old, Yetemegnu was married to a man two decades her senior, an ambitious poet-priest. Over her lifetime her world changed beyond recognition. She witnessed Fascist invasion and occupation, Allied bombardment and exile from her city, the ascent and fall of Emperor Haile Selassie, revolution and civil war. She endured all these things alongside parenthood, widowhood, and the death of children.

The Wife's Tale is an intimate memoir, of both a life and a country. In prose steeped in Yetemegnu's distinctive voice and point of view, Aida Edemariam retells her grandmother's stories of a childhood surrounded by proud priests and soldiers, of her husband's imprisonment, of her fight for justice - all of it played out against the rhythms of the natural world and an ancient cycle of religious festivals. She introduces us to a rich cast of characters - emperors and empresses, scholars and nuns, Marxist revolutionaries and wartime double agents - and through these encounters takes us deep into the landscape and culture of this many-layered, often mischaracterized country.

“With a keen attention to the senses - the smell of mint in the garden, the pings of rain off a metal roof - Edemariam laces together the history of woman and country in such a way as to make one indispensable to the other.” (The Walrus)

“Aida Edemariam has shot an arrow through time, and landed it in our one, shared heart. The Wife’s Tale captivated me from the first scene, left me dizzy with details that ring so true they entered my dreams. It is a rare book, not just for the beauty with which it is told, but because you live through a character who has seen more than one person ought to bear. What shines so clearly through this book though, is the love and bravery of a remarkable woman.” (James Maskalyk, author of Life on the Ground Floor)

“The Wife’s Tale is the extraordinary memoir of a woman who lived through the cataclysmic events that shaped modern Ethiopian history. The narrative, which is lovingly and expertly put together by her granddaughter, is a window into a world that would otherwise be invisible to us.” (Abraham Verghese, author of Cutting for Stone)

Winner of the 2019 Royal Society of Literature Ondaatje Prize

Finalist for the 2018 Governor General's Literary Award for Non-Fiction

What listeners say about The Wife's Tale