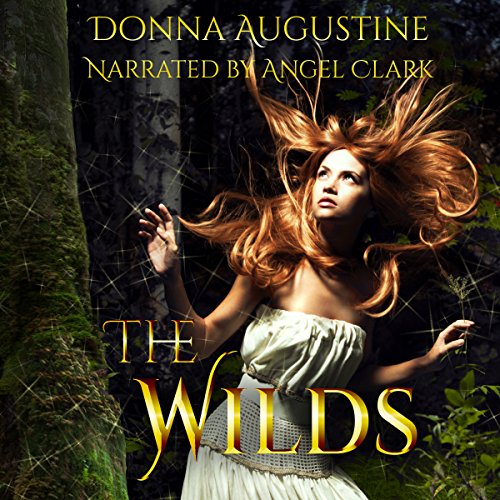 My name is Dahlia, but I'm called a Plaguer, a person who survived the Bloody Death. When the virus first hit the world, it ravaged the human race. I thought I was lucky to survive it, but survival comes at a cost. Ever since the sickness, I see things, and I'm hunted for these visions.

Some seek me out because they want to keep their secrets safe. They don't want the world to know the truth of what they are. Others, like Dax, want my knowledge. Dax has secrets of his own, but as long as he helps me evade the Dark Walkers, he can keep them.

What listeners say about The Wilds

A world worth sinking your fangs into...

There are stories out there that that can build a fire within you so strong your skin feels the burn even days after it’s ending. They can wrap your mind and heart up so fast and so hard that you’d hate the words on the pages if you weren’t itching so bad to turn the next page... Loving every second of it. That was the case with The Wilds. I’ve never listened to a book on audio as I prefer to draw my fingers across the pages while I absorb its essence. Or hug it to my chest with happy sighs of contentment, or throwing the damn thing across the room in a moment of utter frustration. So this will also be a review of the reading.

For the cons: It took nearly a lifetime to get the beginning of the story out of the way. The protagonists origins/home life and the hate there of, was very constant. I nearly put the book down due to how tiring it was to hear how much hated her dilemma. The narrator did a splendid job throughout the book, although in the beginning took a little to gain her comfort zone. However, after meeting Dahlias friends and their innocent Nancy Drew ways, both the Narrator and the story, take off for the ride of a lifetime.

Pros: I had planned on placing the attitude/characteristic of Dahlia in the con section but I found myself hoping for more of her spunky, young, ‘I know everything’ ways. I began rooting for her innocence to win out and her love for living to shine bright, straight to the end. I have to say, I’m so glad I didn’t put this book down. The characters fast gained places in my heart and made wiggle room only for their fellow conspirators. The many voices for the characters that Angel put into the narration were flawless and lacked nothing. I genuinely enjoyed waiting for the next character to be introduced just so I could meet them and learn how they sounded.

I made my way through the first book in one night, much to the chagrin of my eyelids and I regret absolutely nothing. I will now, at 12 AM, start the next edition in this masterpiece of a series.

And take my word on this... don’t stop reading/listening.

A series of plagues has swept the world and no one knows when it will come again. Only a few survive the black death and those who do are imprisoned, and not only because they may still carry the disease. The rare survivors are called Plaguers and are able to see things that others can't. Including the Dark Walkers.

This was a quick listen with a strong female lead and a mysterious male just as strong. Dahlia was an interesting mix of naive and stubborn, at times I wanted to shake her, at others I wanted to smack everyone around her. The world building was excellent, and I can tell the author is just getting started. You'll definitely want to have book two bought and ready to listen to next!

The narration was well done, and immersed me in the story. I requested a copy of the audiobook, and I'm voluntarily leaving a review.

This is the first audio book I've ever listened to and it was fantastic . The author wove an engaging story that I wanted to come along with and the narrator did an amazing job of making the story come to life and keeping me listening.

I absolutely love this series. The narrator does a great job. I'm not a super fan of all the female characters having high pitched whiney voices. After all they've been through I imagined more of what the narrators voice sounds in between dialogue. All together tho I couldn't stop listening so it didn't take away from my experience at all. Kudos

Would you listen to The Wilds again? Why?

Absolutely! I enjoyed the story, and well, the second time around you can always pick up on details you may have missed. It was very enjoyable so I would have a second or third listen without a problem.

What was one of the most memorable moments of The Wilds?

Honestly there where two I loved, the meeting of teh beast in the wilds with the two main characters and near the end of the book where the "second shoe" dropped so to speak.

Definitely the dimension of emotions the characters had so much problems wrestling with. Being able to hear anger, or grief, it really gave the story a new dimension.

I would have to say, the rescue, after she was found again. She had finally given up. So someone else was there to do the fighting.

The beginning of the 2nd series

This is the 2nd series of Donna Augustine's books for me. I was so impressed with the first one I heard (which was her latest) I had the desperate need to find all her other work.

The end of civilazation .... maybe

The story starts off slow, but it picks up so stay with it. I liked the strong female character (Dahl) and that Dax didn't take her to bed before the end of the chapter (to find if when that happens you will have to read the story)

If you could sum up The Wilds in three words, what would they be?

This was my first by Angel. I thought she did a great job. She had a wonderful Dahlia voice and her work of telling a story carried me along so that I saw it in my mind very well.

Yes! And I almost did once things got going and there was so much I wanted to know.

The story ends abruptly at a good spot on a big reveal. It's not a cliffhanger, but this will be one that won't standalone well and the reader should anticipate needing to continue on to get the complete story.

Great way to experience The Wilds!

What did you love best about The Wilds?

The audible edition of The Wilds is a wonderful way to experience a more comprehensive experience of the novel. Angel Clark does a great job with the all the voices, tonality and character interpretation. There are a few narrative mistakes in this edition but it doesn’t lessen the overall enjoyment of the listen. And her voice in first person as the star, Dahlia is exceptional and gives a more intense characterization of her extreme vulnerability and innocence in life matters.

Would you listen to The Wilds again? Why?

yes one of my favorites, the story and narrators passion

the voice of angel clark