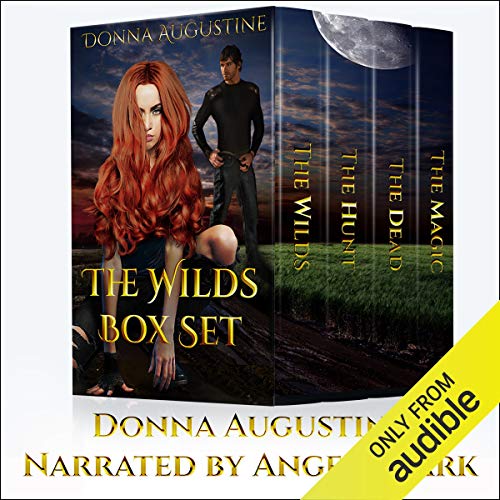 Dal survived the plague that nearly wiped out humanity, but when Dax breaks her out of the asylum, will she survive the Wilds? Experience Dal's story as she learns to survive in a new world, unravel the truth of her heritage and powers, and discover love.

Four full-length novels. This is the complete set of The Wilds, books 1-4.

The Wilds (Book One): I met a Plaguer today, one of the very few who survived the last outbreak of Bloody Death. She said horrible things about me and my companions. We all called her crazy afterward and claimed this was the reason they needed to be locked up. They spread lies that could hurt our fragile world, nearly brought to extinction 150 years ago.

The Hunt (Book Two): Living in the Wilds isn't any picnic, but I thought I had a handle on things: avoid the beasts and I won't get eaten, avoid the waterways and the pirates won't kill me, and stab every Dark Walker I see.

That was before I found out Tiffy's friends were real and back when I'd never heard of the Skinners. Now my magic is on the fritz, and people are disappearing. Amidst all this, I've become the most wanted woman around.

The Dead (Book Three): I'm young to have so many enemies. The Skinners, Dark Walkers, Wood Mist, they all want me for their own reasons. But those were enemies I could fight. Now the disease that changed me forever is back.

It's reaping death and havoc everywhere it strikes and I'm nearly helpless to stop it except for one chance. There's a rumor of a cure. But Dax, my ally here in the Wilds, has vengeance on his mind.

The Magic (Book Four): For as long as I've lived, Dark Walkers have been hunting Plaguers, seeking them for their magic. But there's one Plaguer they want most of all. Me.

Since the fall of civilization, the human race has been barely surviving. Another outbreak of the Bloody Death could be our final straw and there's only one way to ensure that doesn't happen. I need to kill the leader of the Dark Walkers.

I'm stronger than ever but with more to lose than I ever thought possible.

So here I am; ready to fight. Winner take all.

What listeners say about The Wilds Box Set: Books 1-4

The voices for speaking should stop.

Struggled to listen to the voice, just read it and stop making voices. Tiffy sounds like ruby from Max and ruby.... And each book has the voices getting worse.
I find listening to this book really uncomfortable, pauses are placed in weird places making it sound very odd and sometimes not making sense. The reader is incredibly annoying and I stop listening at points because of her voices.
And why does Tiffys age change about 5 times?

I got this series because it was only 1 credit for 4 books but I really enjoyed the story. It’s an original story line and anytime I felt slightly “bored” there was always a spin and I was hooked again!

I loved the series!

this was a wonderful series and for those who like apocalyptic tails, this is a series you will want to add to your bookshelf.

There was a couple things...

I loved the story and didn't want it to end. The only problem I had was Tiffy got younger in the last 2 books and there was parts of the recording that didn't get edited out (restarting lines).

While I did enjoy the story, the author apparently has a template that she uses as this story is very similar to the other two series I have read by her: strong kick-butt heroine, commitment-phone, emotionally absent hero, and a world in need of saving.

What was one of the most memorable moments of The Wilds Box Set: Books 1-4?

Tiffy. She won best supporting actress, for sure.

Oh, my lanta. He voice made this book almost intolerable. I had to increase the speed to 1.25% just to distract myself from her"acting" parts. Hopefully, they find someone else to read her parts. (Insert skin crawl and shudder here) I will not be listening to another book with her narrating. No thank you!

The Heroine is super whiney and made the book a hard listen. The narration was fine unless the heroine was talking and then my ears bled. The story was interesting but also every time something was happening with Dahl and Dax I felt like it was just unnecessarily complicated like no one could be that sense and the fact that he never explained anything to her and then at one point they are magically good at communicating? Weird. Also Tiffy Ave changing was strange she was 6 in the first two books then suddenly she was 4 in the rest

A new twist on paranormal. A good love story, faced in the midst of insurmountable odds of survival, the group face off and hold onto hope for humanity. Great story, great narration.

the story that went nowhere

it took 4 books for the lead to show the slightest bit of self development. most of the time she stubbornly stuck to her ways while learning opportunities passed her by over and over. painfully annoying to witness as a reader.

The blend of fantasy and romance was difficult to take towards the end of the series. While the first book showed promise of developing into a fleshed out fantasy world, it became apparent by book two this was a romance. This being said, by book three I was becoming agitated that the main characters had 'touched' each other yet and shouted with relief when the sparks of romance became love.

An adventure with Fudge!

My favorite characters were Fudge, Bookie, and Dax!

I found myself craving bacon each time it was mentioned, however.